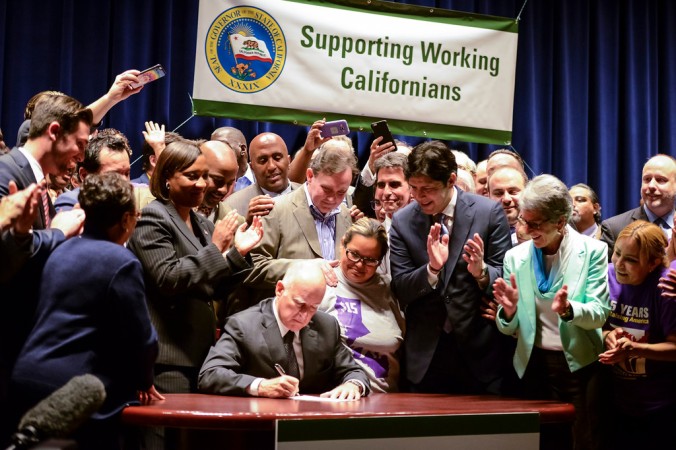 “Economically, minimum wages may not make sense. But morally, socially, and politically they make every sense because it binds the community together to make sure parents can take care of their kids.”

—–Governor Jerry Brown on April 4, as he signed into law a phased state-wide increase in the minimum wage to $15 dollars an hour.

As Commentary wrote in reaction to this jaw-dropping admission following an irresponsible act, “Good intentions have always inoculated the left against criticisms of the consequences of their policy preferences.” This has become a culture-wide, self-destructive malady during the Obama administration, led by the President. Lately, Obama has become increasingly open about it, as when the President killed the Keystone pipeline citing climate change concerns while admitting that doing so would have no likely effect on climate change, but most of his “signature policies” are similar. The Iran deal bids fair to leave Israel as a smoldering wasteland, and the Iranian government has gone out of its way to demonstrate that it cannot be trusted while already violating, as even Obama admits, the “spirit” of the deal, but God Bless Obama for trying to restrain its nuclear ambitions.

The Affordable Care Act is failing in virtually every respect, fulfilling most of the dire predictions of its opponents, but this is still an “achievement” because, and it’s true, more Americans are insured than before. Obama’s Education Department’s sincere—I’ve no doubt about it—effort to make women feel supported and safe on college campuses seeded extensive due process abuse and discrimination against male students, and the most-gender divided campus community since the Seventies. His civil rights policies and rhetoric have created the worst racial divide since the early 1960’s. The intentions in all of these cases were, at least arguably, impeccable and admirable, and apparently for committed progressives, it is that, and not that the policies in pursuit of Panglossian goals have been societally disastrous, that matters.

The mass insanity of raising the minimum wage is the apotheosis of this mania. Note that I am trying to attribute the best possible motives with this: I have read many conservative writers who believe that the left knows the policy will be catastrophic economically, but because it will be politically useful in the short-term, they don’t care about the long-range consequences. Admittedly, statements like Brown’s makes this difficult for me not to agree with them, except that it is usually considered stupid to tell voters that what you are doing makes no sense.

“Let’s be clear. Some increase in the federal minimum is justified. It’s been at $7.25 since 2009. Inflation has eroded its value 10 percent since then and 24 percent since its peak year of 1968, says the left-leaning Economic Policy Institute. But raising it to $15 (a doubling), or even $12 (a two-thirds increase), would be a radical act that front-loads the benefits and back-loads the costs.

In 2014, about 3 million workers were paid the minimum or less; that’s 2 percent of 146 million workers. If the minimum had been set at $15 — and including workers just over the new minimum whose wages employers would probably raise — the number of affected workers would have been 59 million, or 40 percent…With time, job losses would mount. Some companies would become unprofitable and shrink or close. Others would automate. Some start-ups would be scrapped. How many jobs would be lost is guesswork. The Congressional Budget Office estimated that a $10.10 minimum (President Obama’s proposal) would cut employment by about 500,000. The American Action Forum, a right-leaning think tank that says it followed CBO’s methodology, calculates that a $12 minimum would cost 1.3 million jobs and a $15 minimum would cost 3.3 million.

Moreover, the least-skilled workers might suffer the largest losses, especially if higher wages draw experienced people back into the labor market. Family incomes would rise, but about four-fifths of the gains would go to workers in households above the government’s poverty line — though often not by much — because “many low-wage workers are not members of low-income families,” says the CBO. College students with minimum-wage jobs aren’t all from poor families.”

When some cities jumped into the minimum wage increase pool last year, hesitant populist leaders were given some hard experiment results to observe that should have been hard to ignore. Wherever cities implemented big minimum-wage hikes to $10 an hour or more last year, Labor Department data through December 2015 showed that job creation fell to the slowest pace in at least five years. For example:

After New York’s Governor Cuomo signed into law a similar phased increase to $15,an executive at burger chain White Castle explained what the likely result would be on his company and its jobs:

“What this means for White Castle is we really have to evaluate how we manage our business. About 30 percent of every sales dollar covers the pay of our hourly workers, and that doesn’t include management. It’s our biggest investment, our biggest cost. And it’s one that if we see increase dramatically through fiat, and we don’t do anything — it’s unsustainable. We are in uncharted waters.Is there any room to raise prices to cover costs?We think we’d need to increase menu prices by something like 50 percent. It’s not something we’ve done before. It’d be catastrophic. Candidly, this could create a whole generation of kids who won’t get their first job. We’re in tough neighborhoods — and White Castle hasn’t abandoned those neighborhoods. On the surface, higher pay seems noble, but it’s not — because it denies the reality of the free-enterprise framework that has allowed small businesses like ours to thrive.”

Business owners get it. “The thought process is that you’re going to put more money in people’s pockets,” said Albuquerque café owner Myra Ghattas in a recent L.A. Times report. “In theory, that makes sense. But people end up getting hours cut, and they don’t actually make any more money.”In the 1980’s, I supervised an independent study at the U.S. Chamber of Commerce regarding raising the minimum wage then. I remember it well: it was largely responsible for me losing my job. The Chamber’s position was the an increase would be inflationary, and my study didn’t show that sufficiently for the Chamber’s tastes–I accepted the job on the basis that I would do objective studies, and that the Chamber would but censor results. The study did show, very convincingly, that hikes in the minimum wage lose jobs.

The position of minimum wage wage advocates on the left can only be described as dishonest. They deny that fact, and it is a fact: every hike in the minimum wage has lost jobs, and caused some businesses to close.

But ideology trumps reality here, as it too often does (an example on the right would be assurances that illegal immigrants can all be deported). Thus Think Progress’s Bryce Covert countered the CBO study cited by Samuelson by arguing that the increase in income for millions of lower-skilled workers would result in more spending, which in turn creates jobs. (This is versatile progressive nonsense: it is the same argument given by Nancy Pelosi to justify extending unemployment benefits forever.) National Memo’s Joe Conason (bias alert on my part: after his performance during the Lewinsky scandal, I tend to believe that if Conason says it, it’s a lie) declared that the CBO’s assessment was “fuzzy and unreliable.” To his shame, Barack Obama even spewed the company line, saying, “There’s no solid evidence that a higher minimum wage costs jobs.” The Department of Labor launched a web page  to support the President’s lie, the minimum wage equivalent of “If you like your plan, you can keep your plan, period.”

“Myth: Increasing the minimum wage will cause people to lose their jobs,” the Labor Department site said. “Not true.” That’s deceit, straight up. Big minimum wage hike over time do and will lose jobs. Raising salaries by mandate have negative consequences for the very people who think they will benefit.

Now that the lie is well embedded in the minds of the none-too-sophisticated Democratic base, some progressives are laying the groundwork for the harsh morning after to come. “The $15 minimum wage sweeping the nation might kill jobs — and that’s okay,” read the headline on Washington Post journalist’s Lydia DePillis’ report.  “For [minimum wage increase] advocates, the question isn’t whether minimum wage hikes will kill jobs, but rather how to help people who end up unemployed when they do.”

Oh. So that’s the plan. “Why shouldn’t we in fact accept job loss?” asks New School economics and urban policy professor David Howell. “What’s so bad about getting rid of crappy jobs, forcing employers to upgrade, and having a serious program to compensate anyone who is in the slightest way harmed by that?”

This is how a lot of these people think. Bernie Sanders thinks this way; Robert Reich thinks this way; Hillary Clinton will pretend she thinks this way until she has the nomination. Better to be a ward of the state than to be struggling to support yourself in a “crappy job,’ and if you don’t think so, too bad. Wiser people will make that choice for you, using the power of the government. This is what Jerry Brown calls making sense “morally and politically.”

It only makes sense politically. Passing laws that don’t work economically–-and that you know won’t work before you pass them—is incompetent and dishonest. There is no such thing as a “moral law” that does more damage than good, yet Brown’s statement is an open admission that the ideology of his party and progressives believe otherwise.

I find that astounding.

It is also terrifying.

“If there is one particular social benefit to these minimum wage laws, it would be that they have led liberals to let their veil slip. For too many on the left, the ends always justify the means, even if those means are willfully deceptive.”

Meanwhile, Democratic presidential candidate Hillary Clinton appeared with Cuomo at a rally in his state, while  Bernie Sanders said in a prepared statement that he was “proud that today two of our largest states will be increasing the minimum wage to a living wage of $15 an hour.”

25 thoughts on “Unethical Quote Of The Month—But Awfully Revelatory, If You Have The Integrity To Accept What It Means—California Gov. Jerry Brown”