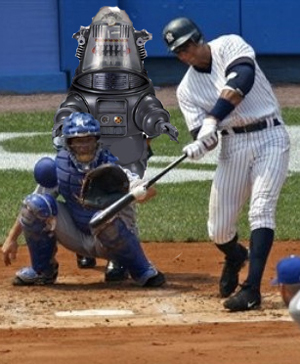 Calling balls and strikes in major league baseball has to be mechanized. This is obvious and beyond argument, and the only question is what will finally make the bitter-enders abandon their rationalizations and capitulate to reality.

I last wrote about this in 2012 in a post titled “Umpire Accountability, As the Day Of The Robot Approaches,” following a 1-0 game in which a batter in a position to tie the game was called out on strikes by an umpire named Larry Vanover, who rang him up with three balls out of the strike zone for the final 9th inning out. This particular contest was between two teams that had finished the previous season with one of them edging out the other for the play-offs by a single game, on the last day of the schedule. The pitches called strikes in this particular at bat weren’t even close to being over the plate. You could see that all three were wide with the naked eye as they arrived in the catcher’s mitt; you could see it in the computer graphic on the screen, and after the game, the pitches’ locations were charted to show that they were, in fact, balls. I wrote…

Baseball fans invest too much time and emotion into following the games and their teams to just shrug off results warped by obvious incompetence. The kind of atrocious umpiring demonstrated by Vanover…poses a direct challenge to baseball’s integrity. What will baseball’s leaders do about it?

They have only three choices:

1.They can, for the first time, take public and punitive action against umpires whose poor performance exceeds a missed call or a human mistake, and demonstrates inexcusable incompetence or a lack of professionalism. First time: a stiff fine. Second time: a suspension without pay. Third time: dismissal.I know that the umpires union in Major League Baseball protects its incompetents as zealously as the teachers unions, but baseball has its product to protect.

2. Baseball’s leaders can make a commitment to automated strike and out calling, and cut back on crews to one field umpire to keep order and one booth umpire to read the printouts, watch the TV screen, and study the replays.

3. Baseball can reject integrity and credibility, and continue to let the Vanovers on the field wreck the games and alienate fans.

So far, disgracefully, the sport has chosen #3, but the clock is ticking.

This season, I have seen terrible calls at the plate plausibly change the results of at least five baseball games, and bad calls undoubtedly altered events in almost every other game I witnessed too.  In some games, as much as 20% of all ball and strike calls are wrong. Those who don’t follow baseball tend not to understand this, but the difference between whether the fourth pitch, for example, to a batter with a count of two balls and one strike, is called a strike or not is statistically and strategically huge. If the pitch is called a strike, the average of all batters with the resulting 2-2 count is a .193 batting average, with a .584 OPS (on-base percentage plus slugging percentage). If the pitch is called a ball, however, the 3-1 count leads, on average, to a .274 average and a 1.029 OPS. How many games are significantly affected by bad calls on the fourth pitch? It’s impossible to say, except to say, “a lot.”

Baseball, as you probably know, finally adopted instant replay three years a go. The system isn’t perfect, but it reveals many umpiring mistakes every day, and fixes them. Yes, it takes too long, and yes, even with replay they sometimes get the play wrong. At least, however, we know that a national embarrassment like the one that occurred in 2010, when the last out of what should have been a no-hitter was mistakenly called a hit by a very good umpire although the TV replay instantly showed the audience that the call was not just wrong but astoundingly wrong, can never occur again. That play ensured that the technology available would eventually be used to stop such fiascos, and it only took a few terrible, game-altering calls during play-offs and the World Series to clinch it.

In 2010, the ball and strike calling technology wasn’t as good or as much in evidence as it is now. Today, every cable broadcast as well as national broadcasts show the location of each pitch on computer-measured zone—sometimes in 3-D—that graphically indicates whether the pitch was a ball or a strike. Sometimes it shows the ball literally in the middle of the plate, yet the umpire calls it a “ball.” Other times, we will see lots of black between the zone and the location of the ball, indicating that the ball missed being a true strike by many inches. Never mind: the umpire called the pitch a strike anyway. It’s infuriating, and unnecessary. Not only can these mistakes be avoided, they can be avoided without slowing down the game at all.

This was not always the case, of course. It wasn’t that long ago that many games were not televised, and there was no way to challenge an umpire’s judgment on a ball or strike call unless the botch was wildly egregious. If you have no choice you have no problem, so the fact that umpires missed crucial calls was regarded as a feature of the game, not a bug—“the human factor,” it was lovingly called.  On a recent Boston Red Sox cablecast, former Red Sox player and current color man Steve “Psycho” Lyons was asked about whether he favored automated ball and strike calls, and delivered a classic all-rationalization and logical fallacy rant. (Steve is a well-known idiot, but a glib idiot, hence his current career.) “Why do we need to change anything?” he asked, neatly sidestepping the fact that change has already occurred: once, nobody knew for certain when umpires called a pitch wrong; now the mistake is not only immediately apparent, but preserved. “We’ve always had bad calls; it’s part of the game!” This is Rationalization #1, “Everybody does it” combined with #41. The Evasive Tautology, or “It is what it is”  to reach an absurd conclusion that can be equally logically employed to condemn seat belts and keep the populace smoking three packs of cigarettes a day.

“Nobody’s perfect: these umpires are the best at what they do!”  This  is #19. The Perfection Diversion: “Nobody’s Perfect!” or “Everybody makes mistakes!” at its worst: the fact that nobody’s perfect doesn’t eliminate the obligation to be as good as you can, and the “best umpires,” are no longer good enough, because there are now better and more accurate ways to call balls and strikes. “What next? Why not just have holograms play perfect baseball?” This was a straw man, as well as #9, The Reverse Slippery Slope, reducing a reasonable measure to an unreasonable one by absurd extensions.

My favorite of Lyons’ bad arguments was that bad calls added to the fun of the game. “Controversy is good!” he said. Yes, and when there was legitimate controversy over a particular strike call, back in the days when there was no visual record of a pitch’s location sufficiently accurate and reliable to settle the controversy, maybe Lyons’ point had some validity. When a pitch can be shown to be unequivocally wrongly called, however, there is no controversy. The call is uncontroversially wrong; the athlete who deserved to prevail didn’t. There’s not a thing fun about that, especially if there is no excuse for it, because the technology is available to avoid the problem.

Amusingly, Lyons himself was screaming about a how two terrible calls had robbed the Red Sox of a crucial at bat in a game the very next night. He didn’t sound like he was having fun.

Finally, Lyons pointed out that some catchers are especially adept at “stealing” strike calls, by pulling a ball caught out of the zone into it so quickly and slyly that the umpire is fooled. “Do we want to take that away from them”?, he asked. In a word, yes. That technique developed to take advantage of the umpires’ limitations: it’s cheating, essentially, but a form of cheating that can’t be policed. The rules say a strike is a pitch that crosses the strike zone, not a pitch that the catcher is able to make appear to have crossed the strike zone. The catchers won’t be able to fool the computer after the pitch is completed by where their gloves end up. Good.

Technology allows human beings to address problems that were once regarded as unavoidable. This is just one more example. We convince ourselves that imperfections are charming when we have no choice but to accept them. When there is a means of eliminating them, however, holding on to that delusion is irresponsible. The imperfection that we know can be fixed, meanwhile, becomes an irritant. What was a feature of baseball before the technology to eliminate it existed is now officially a bug.

Baseball has a duty to make sure a strike is called a strike and a ball a ball, and not to keep pretending that it’s fun to let its games be decided by avoidable human error.

28 thoughts on “Calling Balls And Strikes”