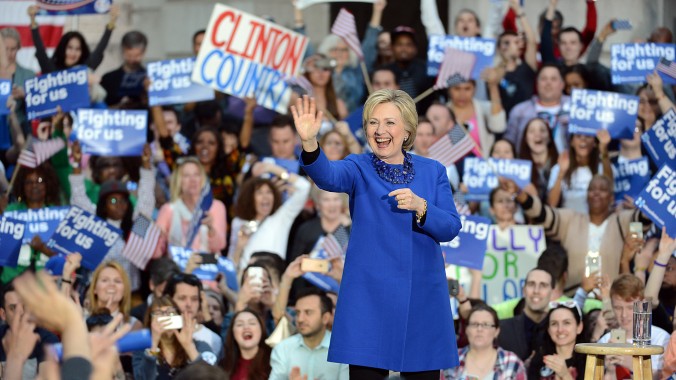 Less than a year ago, I responded to a series of what I regarded then (and now) as irresponsible expressions of support, bias and denial by Hillary Clinton supporters with ten questions designed to rescue them from corruption. At the time, the possibility that an even worse candidate would (or could) be nominated by the Republican Party never crossed my mind.

Although it was largely buried over the last week in the aftermath of the Orlando shooting, Clinton’s e-mail fiasco was further exposed as the deep evidence of  long-term Clinton corruption that it is.  One of the most damaging e-mails handled on her private server, for example, was not turned over to the State Department (Hillary has sworn repeatedly a that ALL State Department business-related e-mails were turned over, raising the rebuttable presumption that she had other State communications among the 30,000 or so that her personal lawyers had destroyed.) We also learned that State Department staffers struggled in December 2010 over a serious technical problem that affected emails from the improper server, causing State staffers  to temporarily disable security features on the government’s own systems, thus making them more vulnerable to attack.

In a deposition under oath, Clinton’s IT specialist Bryan Pagliano, a central figure in the set-up and management of Clinton’s personal server, invoked the Fifth more than 125 times.  Meanwhile, the shadowy Clinton Foundation machinations came to the fore once again. An Associated Press review of the official calendar Hillary Clinton kept as Secretary of State identified at least 75 meetings with longtime political donors, Clinton Foundation contributors, corporate and other outside interests that were not recorded.  The calendar omissions naturally reinforce suspicions that she sought to hide possibly improper or even illegal uses of her influence and position to raise funds for the foundation. While the news media tried to spin Donald Trump’s statement in his attack on Hillary last week that “Clinton’s State Department approved the transfer of 20% of America’s uranium holdings to Russia while nine investors in the deal funneled $145 million to the Clinton Foundation,” his statement was accurate. For a change.

What was striking about the ten questions, looking at them again, is how little I would alter them today. The major change is that the arguments of those who claimed that evidence of Hillary’s unethical conduct was partisan or inconclusive look even more desperate and dishonest than they did last August. For the same reasons, the passage of time makes Clinton’s shameless and insulting lies seem even more shameless and insulting. The Democratic Party also looks worse and more corrupt: it rigged the nomination for this woman of demonstrably untrustworthy and venal character, as well as of dubious skills. Nothing can surpass the complete abdication of its duty to the United States by the Republican Party and its voters, but this was a betrayal by the Democrats.

Here is the list. I’ll have a few observations along the way, in bold.

1. Hillary did what she did, regardless of how it is ultimately defined. If she is charged with a crime, will that change your attitude? What if she is convicted? If she knew what she was doing might be determined to be a crime, but assumed she wouldn’t be caught, what difference does it make whether or not she is charged or convicted?

No candidate for high office should continue to run while under indictment by federal authorities. I’m sure Hillary would though.

2. Hillary could have said, when this first arose, “I am sorry. I was foolish and irresponsible, and I never should have used a private system for official business. It was a serious breach, and I will cooperate completely by turning over all of my e-mails to the State Department.” That she didn’t can only mean 1) that she has something really bad to hide, 2) she isn’t sorry, 3) is stupid, 4) just reflexively lies whenever she is in trouble, and arguably all of them. Do you think someone like that should be President under any circumstances?

We now know the answers almost certainly are 1) that she has something really bad to hide, 2) she isn’t sorry, and 4) just reflexively lies whenever she is in trouble.

3. Do you think that it is a serious problem when a Presidential candidate describes the duty to handle official documents carefully and securely as “nonsense”?

4. Do you think the habit of lying to the news media and the American people for purely personal gain, rather than in the national interest, should disqualify someone for elected office?

5. If you, as a feminist, support Hillary Clinton because she is a woman, what woman, if any, wouldn’t you support? Melissa Harris-Perry? Rosie O’Donnell? Rep. Shiela Jackson Lee? Kelly Osbourne? Paris Hilton? Any woman? Why isn’t that sexist by definition? And why are any of those women less trustworthy than Hillary Clinton?

6. The Obama Administration has been a textbook exhibition of how bad big government, progressive policies can be. The EPA, which just polluted an entire river, is the latest catastrophic example out of the Obama Administration. The Education Department successfully eliminated due process on college campuses. The Veterans Administration is killing veterans. The Justice Department has refused to deliver equal and non-partisan justice. The Treasury Department has allowed the IRS to corrupt the power of taxation with partisanship. The TSA is incompetent and useless. Health care costs keep rising, and the Affordable Care Act made the insurance of millions of American unaffordable. The GSA couldn’t protect its computers. Job growth is stagnant; more American are receiving public assistance and fewer are paying federal taxes than ever before. The Secret Service is a disaster. The NSA is out of control, and it can’t protect its data either. Race relations are the worst they have been since the days of Bull Connor; after years of decline, urban violence is rising. The entire law enforcement system appears to be breaking down. Illegal immigration is being encouraged. The power of big government has been used to push unprecedented incursions on privacy and due process. The United States’ ability to restrain chaos abroad has been reduced to a dangerous level. When Americans are hideously abused abroad, the government makes no response that will send a message that it is intolerable. The deficits in Medicare, Medicaid and Social Security, long ago agreed to be unsustainable, have not been addressed. Neither has the national debt, which has exploded under this administration as no other. There is much more, but this suffices to lay the foundation for this question:

What is it about this performance is so appealing that it makes you willing to vote for a cynical, venal, lying incompetent who contributed to it and who promises more of the same?

7. One of the main reasons Clinton used a private server, critics believe, is to cover-up her efforts to get Clinton Foundation donations from foreign powers seeking to influence her decisions and policies once she moved into the White House. Do you not believe having a high government official like a Secretary of State or a President being indirectly paid money by foreign governments is wrong and dangerous? If not, why not?

Four months laster, this remains as one of the most important questions, and the one that most exposes the corruption of Hillary’s true-blue supporters.

8. It is generally agreed that among the most crippling and damaging developments in society has been toxic political polarization, partyism, and an inability of the parties and their supporters to work together in the national interest. Hillary Clinton is one of the most divisive and polarizing figures in American political history. Why would you believe it makes sense to elect such an individual at this time in our history even if she were not demonstrably dishonest and untrustworthy?

This is the one question that is rendered moot by the fact that Donald Trump is likely to be her opposition.

9. Please list the tangible achievements, positive accomplishments and evidence of leadership ability  in Hillary Clinton’s life that you believe suggest that she should be President or is likely to be a competent and effective one.

This is the question that is given insufficient weight by the Clinton-enabling media. The fact that recitations of her qualifications keep defaulting to her work for the Children’s Defense Fund and tenure as First Lady should be a throbbing tell.

10. What the hell is the matter with you?

This question only applies to those who really want Hillary as President, as opposed to people like me, who have to accept the reality that this awful human being is still infinitely preferable to the reckless, blabbering fool the Republicans seem poised to nominate.