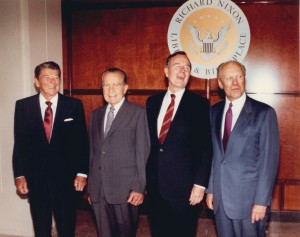 Pop Quiz: Who is missing from this picture from the dedication of the Nixon Library in 1990, and why?

I can’t stand the Kennedy Library in Boston, with all its triumphal, sentimental hagiography of both Jack and Bobby. A presidential library will naturally try to put the best spin on the accomplishments, failures, and character deficits of its subject, but it has an obligation to history too. I once was determined to visit all of the libraries, but after the first few I decided that these structures were more like the pyramids than fair and enlightening representations of the men they honored.

The worst in this respect, as you might guess, was the infamous Richard Nixon Presidential Library in Yorba Linda, California, which opened 26 years ago.The Watergate exhibit, approved by Nixon himself, painted Nixon as an innocent and heroic victim brought down by the media  and his sinister foes. This was certainly Nixon’s view, but it has no relationship to reality. So convinced was Congress that the Richard Nixon Presidential Library would display the same lack of ethics as its namesake that it passed a law in 1974 requiring his presidential records to be stored with the National Archives and out of the library’s control, where they might be altered or “lost.”

From the LA Times:

“The museum’s heavily edited rendition of the “smoking gun” tape that implicated Nixon was replaced with the full recording, and the new exhibit placed the Watergate episode in the context of a larger campaign of presidential secrecy and sabotage. Now a $15-million renovation focuses on the rest of the museum’s decades-old galleries, set to reopen in October, with the aim of building an unflinching but well-rounded portrait of a complicated man whose long career has often been overshadowed by his quick and stunning fall from grace…The renovation is being paid for by funds raised by the Nixon Foundation [ whose board includes many  Nixon loyalists, including his daughters Tricia Nixon Cox and Julie Nixon Eisenhower]… But the gallery designs and exhibit content will be the result of an ongoing collaboration between the foundation and the federal government. Construction kicked off in January, with Karl Rove and Christopher Nixon Cox, Nixon’s grandson, in attendance.”

Eliminating the whitewash is fairer to Nixon, too. A visitor who wasn’t misled by the original library cover-up would have no reason to believe anything else in the museum. Nixon, before his fall, had a remarkable Presidency, and in many ways was a deft administrator whose achievements in both foreign and domestic policy were far reaching and influential to this day.

Said Michael Ellzey, director of the museum since 2014, in an interview,

“The intellectual honesty and integrity of this was very important to us. We wanted to be beyond reproach.”

Meanwhile, The William J. Clinton Presidential Library, built with $165 million in private donations through the Clinton Foundation, has an exhibit on Bill’s impeachment. It explains the episode as being “not about the Constitution or rule of law, but…instead a quest for power that the president’s opponents could not win at the ballot box.”

[Ethics Alarms attempts to give proper attribution and credit to all sources of facts, analysis and other assistance that go into its blog posts, and seek written permission when appropriate. If you are aware of one I missed, or believe your own work or property was used in any way without proper attribution, credit or permission, please contact me, Jack Marshall, at  jamproethics@verizon.net.]

34 thoughts on “Ethics Heroes: The Nixon Foundation And The Richard Nixon Presidential Library”