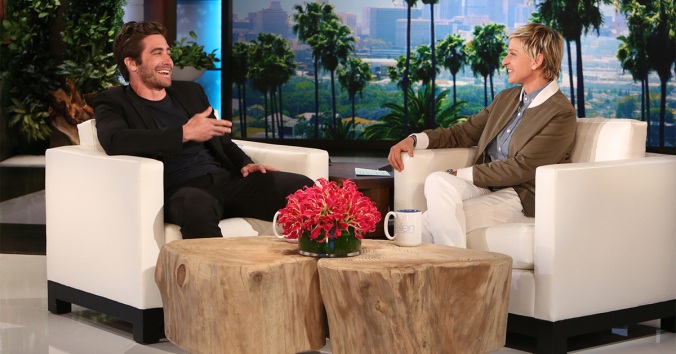 That was a rhetorical question. It isn’t okay. It’s sexual harassment. It’s a double standard. And it’s wrong.

I must admit, I’m kind of ticked off about it.

Jake Gyllenhaal is a marvelous and attractive young actor, currently starring on Broadway in the revival of Sondheim’s “Sunday in the Park With George.” He’s also a favorite guest of Ellen Degeneris, America’s favorite openly gay TV talk show host. I don’t usually watch “Ellen,” but I was in a dentist’s chair getting SIX cavities filled (Remember Dudley Moore in “10”? Like that.) and that was on the telly while I was suffering.

Ellen spent easily five minutes nagging Jake to take off his shirt. Well, it’s possible it was less: time seems to pass slowly when you are watching a famous and beloved Hillary Clinton supporter engage in unethical sexual conduct that is far, far more substantive than anything Billy Bush did when he was caught on tape with Donald Trump, and there are drills, rubber devices, cotton and random finger in your mouth.

Try it some time. You’ll see.

Ellen was flirty. She was teasing. She actually unbuttoned (or buttoned, it was hard to see, and I was screaming) his shirt. Jake appeared embarrassed—he refused to take it off—but Ellen didn’t stop. Was it “unwelcome”? That’s the key factor that makes it sexual harassment, but in this case, it doesn’t matter. This was on TV. Even if Gyllenhaal agreed to the incident in advance, there were millions of viewers. This is classic third party harassment. Those witnessing it were informed that sexual harassment is harmless, playful and cute…or, that women harassing men is harmless, playful and cute. Or maybe, as my dentist suggested when I asked him what he thought of what we had just witnessed, that lesbians harassing straight men is harmless, playful and cute.

Funny, I’ve studied sexual harassment law and the various cases, and I don’t recall seeing that exception. Or maybe it’s just Ellen who has the privilege, because, you know, she’s so nice and funny. Its that it?  Seriously? I’m pretty certain Donald Trump was sure that special rules applied to him, too.

Meanwhile, Billy Bush, who was not on TV when he played along with Donald Trump and enticed an actress—who also didn’t appear to be made uncomfortable, but you never know— to hug the billionaire, was vilified, fired and had his career crushed, as feminists and columnists decried the persistent “war on women” that encouraged this kind of conduct.

Sexually harassing a male actor in front of millions? Hey, lighten up! It’s Ellen! It’s all in good fun!

12 thoughts on “From The Double Standard Files: I Just Watched Ellen Degeneris Sexually Harass Jake Gyllenhaal On TV…Why Is That OK?”