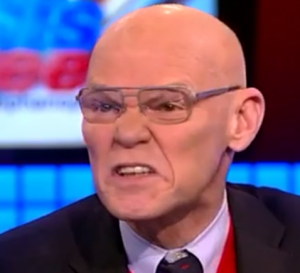 I swear, I didn’t pick this photo to make James Carville look crazy or nasty. This is really what he looked like today…

5. The uproar over Clinton’s private server use and possible security breaches being investigated further with FBI inquiries into the newly uncovered Huma Abedin e-mails seems oddly out of proportion to its substance, at this point. The violent reaction of Democrats and Clinton’s campaign is more suspicious than the information itself. The immediate default to accusations of political and professional misconduct is itself unfair and unethical, and reminds those who are open to being reminded of the Clinton habit of bullying and threatening adversaries, including honorable ones. Just as Trump cannot seem to help himself from lashing out disproportionately at every affront real or imagined, the current over-reaction is itself disturbing. There are too many bullies and thugs in the Clinton camp.

6. Next to Harry Reid, the most publicized accuser of Comey has been Richard Painter, a law professor at the University of Minnesota and the chief ethics lawyer in the George W. Bush White House from 2005 to 2007. He has filed a Hatch Act complaint against Comey with the federal Office of Special Counsel and Office of Government Ethics. As with Reid’s accusation, his is unjustified. Unlike Reid, Painter is intelligent, informed and honorable, and I can only speculate why he has jumped the rails like this. Painter argued in a New York Times op-ed on Sunday that Comey’s intent can be inferred from the absence of a good reason for sending the letter.

Huh? He had a good reason, and as a lawyer and ethics expert, it should be obvious. He didn’t want to be accused of lying to Congress, or to believe that he was lying to Congress. That’s an excellent reason. There are others. “Absent extraordinary circumstances that might justify it, a public communication about a pending F.B.I. investigation involving a candidate that is made on the eve of an election is . . . very likely to be a violation of the Hatch Act and a misuse of an official position,” Painter claims. Okay, but there were extraordinary circumstances. Public distrust of law enforcement institutions is at a dangerous, all-time high. Every decision is attacked as corrupt or politically motivated by one party or the other. The particularly volatile  situation of a Presidential candidate being investigated by the FBI was greatly exacerbated by the Attorney General allowing herself to be pulled into an inappropriate and improper meeting with the husband of the candidate under investigation shortly before a decision whether to prosecute was due–I’d call that an “extraordinary circumstance.” Comey has been trying to restore the integrity of the Justice Department, which Holder and Lynch, along with President Obama, has allowed to be seriously soiled. He may or may not have made the right choice, but for Painter to file a complaint alleging intentional political bias based on his actions alone is irresponsible. Writes Jonathan Turley, also a law professor of note, and one who does a better job avoid partisan bias than Painter does:

“Comey was between the horns of a dilemma. He could be accused of acts of commission in making the disclosure or omission in withholding the disclosure in an election year. Quite frankly, I found Painter’s justification for his filing remarkably speculative. He admits that he has no evidence to suggest that Comey wants to influence the election or favors either candidate. Intent is key under the Hatch investigations.  You can disagree with the timing of Comey’s disclosure, but that is not a matter for the Hatch Act or even an ethical charge in my view.”

“Or even an ethical charge.” Bingo. And those are harsh words from the usually excessively mild Turley.

I’m not sure what’s going on with Painter, whose opinions I have followed for years. I have followed him, and even argued with him occasionally, on the excellent legal ethics blog, the Legal Ethics Forum, where he is a contributor. If he is a Republican, he’s either a disillusioned one or a strange sub-species. Most of his posts tilt leftward, and they are almost all political in nature, in sharp contrast to everyone else. He obviously has no respect for the Republicans in Congress, and is as vehemently anti-Trump as I am. Unlike me, apparently, he seems to have allowed his rational contempt for Trump lead him to a damaging bias in favor of Hillary Clinton. Ethics complaints should not be used as a political weapon.

7. Painter is the picture of fairness and restraint, however, compared to James Carville, the Clinton attack dog who apparently has no shame or has finally gone nuts. He went into a full-scale, fact-impaired rant on MSNBC, accusing Comey of conspiring with the KGB and House Republicans, saying yesterday:

Does Carville really believe this hysterical nonsense, or is he, as usual, just earning his paycheck by setting up the extreme perimeters of the Clinton disinformation campaign? It’s impossible to say with him He went on…

“He was acting in concert and coordination with the House Republicans. End of story. He gave a letter to them. They gave it to FOX News. Also, we have this extraordinary case of the KGB being involved in this race and selectively leaking things from the Clinton campaign that they hacked.  So American democracy is really under attack here. And the question is how are we and in particular and how are Democrats going to respond to this. We have to understand this is really, really quite extraordinary. And it would seem to me that the FBI shouldn’t be getting rolled by the House Republicans and that’s what happened here. There is nothing going on and in the meantime we do know that our democracy is under assault by the KGB. To me, that’s something we ought to be talking about. That’s a relevant issue in this campaign. And people have to decide do we want our country for ourselves with the people in charge or are we going to elect the KGB and the House Republicans to decide this election.”

Wow! First, Comey’s letter was sent to all members of the committee, both Democrats and Republicans. I don’t think it was proper for the Chairman to give the letter to the news media, but it was also predictable, it being an election, that the Republicans would. (Of course they would send it to Fox, not being able to trust any other major source to publish it.) That’s not Comey’s problem or concern. As many have pointed out, he could be sure that the fact of the new investigation would be leaked by disgruntled FBI staff, so prudence dictated that he avoid accusations of a cover-up by alerting Congress as he had promised to do.

Second, and despicably, Carville is playing the game I flagged here, trying to make the issue how the public is being informed of how dishonest and slimy Team Clinton is, rather than how dishonest and slimy Team Clinton is. Carville is saying, “How dare these people expose our corruption! It’s an outrage!” Boy, it  takes gall–but then, if he has anything, it’s gall aplenty—to express outrage  at Russian hacks while discussing the e-mail scandal, in which Hillary either intentionally or incredibly incompetently exposed U.S. secrets to hacking by foreign powers.

Third, what Carville is doing is pure McCarthyism, 2016, using a false and unsubstantiated claim that an official is working with the “Ruskies” to impugn his honesty and patriotism.

Open-minded voters should ask themselves, “What kind of a leader employs someone like James Carville, and sends him out to engage in a smear campaign like this?”

8. I’ll end this installment—oh, yes, there will be more—with the most nauseating defense of Hillary and unethical attack on those trying to unravel her schemes that we are likely to see…yes, even worse than Carville.  Hillary and her corrupted minions must really be worried, because they have fallen back to the last ditch defense of scoundrels in the age of political correctness bullying: the Victim Card, Gender Variety. The essay is called Hillary Clinton’s Emailgate Is an Attack on Women. It really is. A professor, female of course, named Robin Lakoff is the culprit; she is a professor of linguistics at the University of California, Berkeley.

Yes, America, your children are going into debt to be taught by arrogant fools like this.

The essay is self-rebutting. If you know anyone who reads it and says, “This is exactly what’s going on!” run, or if its your wife, daughter, partner or best friend, send me your address and I’ll send you a sympathy care. In case reading the thing isn’t enough, Ann Althouse does an excellent job eviscerating her fellow female prof, concluding with this delicious slam…

“I am mad. I am mad because I am scared. And if you are a woman, you should be, too. Emailgate is a bitch hunt, but the target is not Hillary Clinton. It’s us.”

Yeah, I’m mad too. I’m mad because a woman who is purportedly concerned that women’s speech is treated as less worthy is putting out such a ludicrously unworthy exemplar of speech by a woman.