“My conscience — as an activist, a strategist — is very clear…if I had to do it all over again, I would know a hell of a lot more about cybersecurity.”

—-Democratic National Committee Chair Donna Brazile, refusing to apologize for forwarding debate and town hall questions to Democratic candidate Hillary Clinton, thus breaching journalism ethics and betraying the trust of CNN, which was employing her as an analyst. 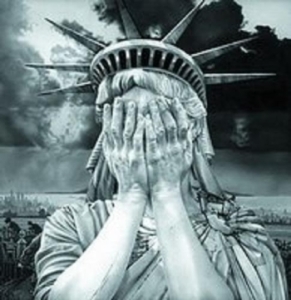 When you vote for Hillary Clinton—and voting against Donald Trump does not change the fact that you are still voting for Clinton—do understand what this statement, in an interview yesterday on satellite radio, really means.  It means that the Democratic Party officially embraces the anti-ethical principle that the ends justifies the means. It means that the party endorses lying and cheating, which was what Brazile did, as long as the “right” people lie and cheat. It means that the Democratic Party—-not just Hillary and her staff, who we know have the core political ethics of Lenin and Goebbels, but the entire party—agrees with Brazile. Her mistake was not cheating, but failing to get away with it, by hiding her conduct insufficiently.

She, like the party she leads, is so confident that the American public, at least the voters she and the party care about, accepts these ugly and undemocratic values that she is not even pretending to regret her actions. If it helps elect Hillary Clinton, it’s fine. It it acquires power for the Democrats, it’s fine. If it deceives the public to the “right” end, it’s fine.

The Democratic Party hasn’t condemned Brazile’s actions, and won’t condemn her smug words of endorsement of lying and cheating. It hasn’t asked her to step down, as her predecessor was made to step down after she was caught rigging the nomination process for Clinton. Thus it endorses Brazile’s  values, and openly so. President Obama also endorsed Brazile’s values, explicitly, by directing his spokesman Josh Earnest to praise her, and only praise her, as “a person of integrity and ..high character” after being asked about the first of Brazile’s cheats on behalf of Clinton (more have since been uncovered.)

Is that clear? The President of the United States publicly stated, through his agent, that an individual who lies and cheats has integrity. This is what integrity has come to mean under this leader, to his party.

We already knew—I hope– that Hillary Clinton would have no problem with lying and cheating as the a means to an end. She hasn’t uttered a word of criticism regarding Brazile’s conduct. The party and its President, however, had an obligation to reject Brazile’s statement and demand her retraction or resignation…if it believed that the nation’s values matter more than the mere acquisition of power. It wouldn’t have been hard. It wouldn’t have been risky. It wouldn’t have lost a single vote, and might have won some. Most of all, it would have been the responsible and ethical course…if the Democratic Party regarded a nation’s values and ethics as being as important as winning.

As the Washington Post reports, the interviewer, Joe Madison,ostensibly a journalist, also saw nothing wrong with Brazile’s stated values. “The one thing folk need to understand at CNN, MSNBC and all of this: When you hire folk who are, as you say, the, you know — their responsibility is to their candidate and their party,” Madison said, “they’re going to do whatever they can to win. That’s just — that’s the nature of the beast.”

So we should expect politicians to lie and cheat, and there’s nothing the matter with that, because it’s the way they are. This, of course, has been one of the three core defenses (rationalizations, lies and logical fallacies, actually), consistently offered to justify or deny Clinton’s conduct. It is the fall-back argument:

1. You can’t believe this: it’s just the right wing media and a smear campaign by conservatives!

…and when the lies or misconduct can no longer be denied,

All politicians are not like this, but they will be, if the public signals capitulation, acceptance and consent. The Democratic Party is obviously corrupted; it wants to have an admitted cheat and liar as its official representative. When America allows these toxic values to prevail, these people—Obama, Clinton, their minions and followers, those who support their increasingly open rejection of ethics and the employment of any means necessary to prevail—it will be closer to corruption as well.

This is what you are voting for when you vote for the Presidential candidate of the party led by Donna Brazile. I guarantee that Democrats will take your vote as an endorsement of their “principles” as well as their candidate.

They will be correct, too.

Just so you know.