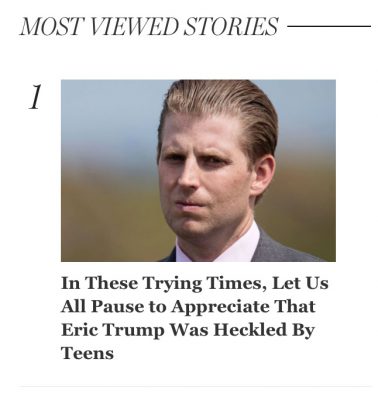 New York Magazine saluted this treatment of Donald Trump’s son and his wife:

Last Thursday night, middle Trump-son Eric, 32, was out in New York City after leaving Quality Italian on 57th Street with wife Lara Yunaska when they reportedly ran into a gaggle of teens who recognized Trump and proceeded to heckle him.

As they crossed Sixth Avenue a group of about eight teens yelled, “Eric — fuck your father!” A more magnanimous heckler shouted, “Love Trumps Hate!”  Eric briefly turned to face them, but then moved on swiftly

The link online was promoted by the above graphic, saying that we should all “appreciate” that Trump and his wife were “heckled” by teens in public.

The more the left and and the media behave this way, the more it is dawning on fair and perceptive Americans how repulsive they are. These people were offended by Donald Trump and thought he was vulgar and boorish, yet they appreciate a man and his wife being harassed and verbally assaulted as they merely go about their lives? These are the people whining about how they are “in fear” of what a Trump administration might bring?

I fear people of influence who encourage punks to harass law-abiding people in public because of their last name or who their parents are.

From Ann Althouse regarding the same article:

“Fuck your father” is despicable harassment, not roasting.

“A roast is an event in which a specific individual, a guest of honor, is subjected to good-natured jokes at their expense intended to amuse the event’s wider audience…. The implication is that the roastee is able to take the jokes in good humor and not as serious criticism or insult, and it is seen by some as a great honor to be roasted. The individual is surrounded by friends, fans, and well-wishers….”

A group of strangers yelling “Fuck your father!” is not good-natured or any kind of honor. There’s nothing the slightest bit friendly about it. We’re told there were “about eight” of these teenagers, accosting Eric (and his wife) as they crossed a street in NYC. This is ugly and should be condemned, but New York Magazine asks us to take a break from our own suffering (over the outcome of the election) and appreciate it. Vile.

Ann is still too mild. During my recent NPR panel about the Trump transition, both of the other panelists referenced “reports” of incidents of harassment of minorities and Muslims that they claimed Donald Trump had “emboldened.” The emboldening argument is clever, though unfair: it holds Trump responsible for unethical and even illegal acts he never encouraged and never endorsed. Now here is New York Magazine, a Trump foe that happily embraces that canard, directly approving hateful harassment of Eric Trump and his wife. That goes far beyond emboldening. That’s incitement.

With its ugly, petulant, juvenile and hypocritical reaction to an unexpected election loss, progressives and Democrats are shattering in plain view the self-constructed myth that they must be on the same side of the ideological divide as the angels (though most of them don’t believe in angels, or religion, for that matter, so I guess I need a different metaphor) in all governance and policy controversies.

What is perhaps more astounding than the hypocrisy is that they don’t even realize how wrong they are. Their ethics alarms are frozen, or rusty, or were never installed, or were installed upside-down. They don’t think cheering a gang of stupid teens terrorizing a couple (yes, eight teens shouting “fuck you” at you is a lot more frightening than your candidate losing the Presidency, and yes, shouting “Love trumps hate!” while being this hateful is proof of stupidity, not magnanimity…) is wrong. They think it is right. They like it. They want to see more of it.

The further people like this are from the levers of power, the safer we should all feel.

37 thoughts on “From the Dead Ethics Alarms Files: New York Magazine Reveals The Ugliness Beneath”