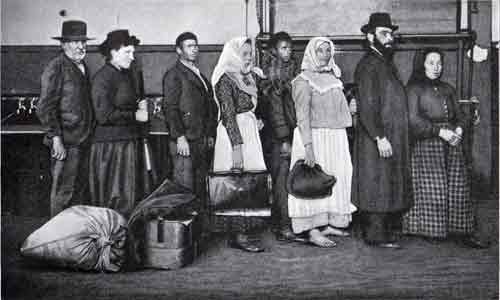 It is,  I have come to believe, the perfect example of dishonest, manipulative and partisan journalism, and here it is again: The Times headline on my morning paper—in ominous, “this is really important” block letters—

The headline refers to the President’s order yesterday concerning the enforcement of existing immigration laws. My maternal grandparents were immigrants from Greece at the turn of the 19th Century to the 20th. They did it by the book: Ellis Island, the whole thing. They were immigrants, not illegal immigrants, and the kind of rules this intentionally deceptive headline evokes would not have threatened them in any way. Yet they would have been alarmed by such a headline. Were they in danger of being sent back to Greece? Is the U.S. government now determined to deport immigrants?

That confusion is exactly what the Times and other news sources that have made a conscious decision to engender by eliminating the clear and material distinction between immigrants and illegal immigrants in news reports. The deceptive use of language allows partisans to tar the President and those who seek to enforce the law as “xenophobes,” and also to create fear among legal immigrants, who have nothing to fear.

We know that the Times does this intentionally, because an honest, informative, undeceptive headline is not elusive at all. “New Trump Deportation Rules Allow Far More Expulsions” is the web headline for the story, and that is accurate, since President Obama limited the number of law-breaking immigrants who would actually face enforcement of the immigration laws the violated and continued to violate. “Trump administration clears the way for far more deportations” headlines the LA Times: it’s not so hard to be clear and informative. The Times wants to  mislead.

And yes, it is fake news, and not accidental fake news, but the fake news even by the narrow, self-serving  definition of the term preferred by the mainstream media: not merely sloppy, biased, misleading reporting that deceives the public, but deliberately false reporting, intended to mislead.

The striking aspect of the news media’s nearly unanimous effort to undermine enforcement and respect for U.S. law and to encourage foreign defiance of U.S. borders is that it isn’t accompanied by any coherent legal or rational justification at all. What other laws in the nation are handled by a tradition of prohibiting conduct, then  once a law-breaker successfully engages in the conduct declaring efforts to apprehend and punish the violation to be cruel and unreasonable? Such an approach encourages individuals to try to violate that law, leading to more violations. Because the “you’re over the border now, so don’t worry!” policy favored by activists is indefensible in law or logic, journalists and pundits rely on deception, emotion, and rhetoric instead to build support for the absurd.

The President’s other favorite news organization, CNN, has a nauseating example of this on its website, a screed attacking the concept of enforcing the immigration laws by am open-borders advocate named Raul Reyes. He uses the Times deceit too: “A nation of immigrants enters dark chapter.”

The “nation of immigrants” part is a non sequitur. Nothing in the history of the U.S. obligates it to allow lawbreakers to live here unencumbered by law enforcement. Nor is it a nation of illegal immigrants, though cynical Democrats seek to make it one.  Reyes’ implied hypocrisy is a lie. Moreover, a nation announcing that it intends to enforce its laws and control its borders is not a “dark chapter,’ except for fans of lawbreaking, like Reyes  Again, that is a false and outrageous statement. It may be a dark chapter for those who have no right to be living in the United States, but that is called accountability.

Now the deception I am reading and hearing from the news media is that the new order means “mass deportations” are coming. The Times:

“President Trump has directed his administration to enforce the nation’s immigration laws more aggressively, unleashing the full force of the federal government to find, arrest and deport those in the country illegally, regardless of whether they have committed serious crimes.”

Yes, the new policy prioritizes for arrest and deportation illegal immigrants arrested, convicted or accused of any crimes at all. The tone of the Times statement, indeed of its entire story, suggests that there is something monstrous about this, and if one’s brain isn’t fully turned on or has been reduced to mush by reading articles by pundits like Mr. Reyes, it might seem so. Pay attention: every illegal immigrant has earned deportation by coming here illegally. Every single one. There is no other side to the issue.

Since mass deportations are impossible, ugly and inevitably chaotic, a practical approach to the problem that doesn’t encourage more illegal immigration is two-fold:

This isn’t cruel, or draconian, or hard to understand. It is basic law enforcement. No illegal immigrant should be allowed to feel, “OK, I’m here now; as long as I don’t break a law, the United States can’t and won’t touch me.” No foreign citizen considering breaking our immigration laws should be encouraged to think, “OK, once I get past the border patrol, I can waltz down the street holding a banner that says, “HA HA! I’m here now! I’m illegal, but you can’t touch me!”

The order specifies priorities, because we can’t and shouldn’t execute mass deportations after so many years of unconscionable political manipulation of  immigration enforcement.  One priority is no more or less reasonable than any other, since all illegal residents are fairly and legitimately subject to penalties, including deportation, because they all broke the law and are therefore illegal. The order could say that all illegal immigrants with names beginning with the letters A, B, C, or D. will be the first targets of enforcement.  Those targeted have nothing to complain about, since they all deserve deportation, and earned it the second they arrived here illegally. There is nothing wrong with that at all. If you have no right to be here, you have no basis to complain about the criteria the government chooses to decide which law-breakers it will focus upon first. (This is not to say that lawyers and judges may make the argument that selective enforcement is unfair, that if we can’t deport all illegals, it’s unfair and even unconstitutional to deports any of them.  Fine. I oppose mass deportations, but if that is going to be the strategy, I could be persuaded to say, “Fine. Then they all go.”

Better would be a policy that targeted the most recent illegal immigrants over those who have been allowed to become part of local communities. Better still would be a way for those long-term residents to have a path to a status that would not include the possibility of being deported. Simply getting here, however, must not create that status.

The Times headline, its reporting, and the allied efforts of most of the news media for years have been aimed at confusing and misleading the public on this elementary concept , and by doing so intentionally undermining the rule of law, devaluing American citizenship, and sabotaging the nation’s sovereignty. All of this is directly opposed to the public interest, and does measurable harm to the nation.

What is a fair term for someone who sets out to oppose the public interest and harm the nation?