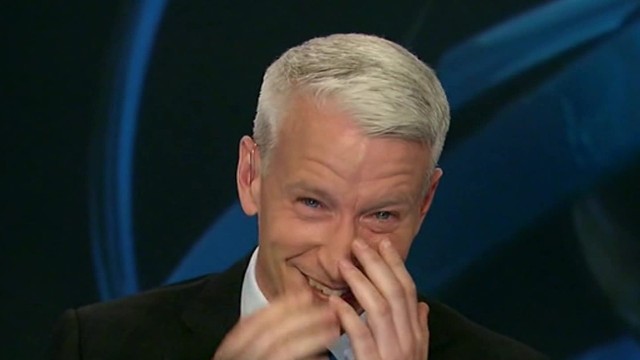 [The title above is a reference to this post from last year, in case you missed it despite my linking to it just about every other day since…]

On the May 19, 2017 edition of Anderson Cooper 360, the CNN host became frustrated with President Trump’s flack Jeffrey Lord—consider him this President’s less slick version of Lanny Davis or less repulsive version of Paul Begala—-as Lord defended the President’s alleged description of former F.B.I. Director James Comey as a “nut job,” leading to this immortal exchange.

Cooper: If he took a dump on his desk, you would defend it.

Niiiiice! So professional! So respectful to the President of the United States and any CNN viewers left who have a shred of civility, decency, and sense of  etiquette in public discourse!

As we know, a back-up weekend weatherman who said this about the  previous President or any before him would have been fired before he finished the 7 day forecast. Cooper, however, is permitted this gutter level breach of courtesy and professionalism, because 1) as CNN’s star, he is held to a lower standard (The Star Syndrome) than weekend weathermen, as we saw in when Cooper smirked and joked with Rachel Maddow about the gay term “teabagger” in order to mock the Tea Party movement,  2) CNN has normalized blatant partisan gestures and outbursts by its talking heads, and 2) this President of the United States  has been found  unworthy of respect and courtesy, or professional journalism standards. CNN will do nothing to discipline Cooper or send te message that his conduct is unacceptable, because the dirty little secret is that as long as President Trump is the target, it is acceptable. At this point in its devolution, CNN is cheerleading what has been accurately called a slow-motion attempted coup by the one-time news network’s party of choice. A Harvard media study released last week showed CNN to be the most unbalanced of all major news outlets in its reporting on the President’s first 100 days, with 97% of its coverage negative in substance or tone.

Cooper later apologized to Lord in the segment, saying, “I like having your voice on here and I think you’re an important voice to have, so I’m sorry I was a little crude. And you defend the president very well, and that’s your job.”

A little crude? Well, I guess he didn’t call the President a cockholster on national TV, but then he’s not a smug openly left-wing satirist who is seen only after 11:30 PM. He isn’t a highly paid smug openly left-wing journalist who is supposed to be the nation’s  successor, at least one of them, to Edward R. Murrow, Walter Cronkite, Barbara Walters—no, scratch Babs, she inflicted “The View” on us—and Peter Jennings. Thanks to Cooper, who couldn’t and wouldn’t exercise a modicum of self-control over his peer group-enforced contempt for an elected President, this kind of vulgarity and personal denigration is what we can expect and will continue to get from what we will fraudulently call broadcast journalists. They are self-righteous progressive/Democratic Party assassins, and the masks are off.

Cooper later apologized again, this time to his audience, sort of, by tweeting,

“I regret the crude sentence i spoke earlier tonight and followed it up by apologizing on air. It was unprofessional. I am genuinely sorry.”

Not good enough. Cooper conjuring the image of the President of the United States “taking a dump” on his desk on national television, and apologizing via Twitter is what a CNN anchor would call, on the air, “cheapshit.” If he truly is sorry, then he should apologize on the air, where he took a metaphorical dump on our political discourse. A real apology would also include apologizing to the President, directly.

This is yet another test to see how low CNN will permit its employees to sink—how much naked bias and unprofessional hackery it will tolerate, and through its tolerance, normalize. Just four years ago, Martin Bashir was forced to resign from MSNBC for saying on the air that he wanted someone to defecate in Sarah Palin’s mouth.

Poor Martin. He was ahead of his time.

44 thoughts on “My Mistake! I Thought Having Trump As President Would Teach Our Kids To Be Uncivil, Vulgar Assholes…I Didn’t Foresee Anderson Cooper Helping Out”