[ Just to remind you how good Debbie, Gene and Donald were. Note that these dancers skipped the staircase..]

I’m changing the Warm-Up headlines to reflect the topics covered. I may even go back and revise the old headlines. It took a while, but I realized that having dozens of essentially identical post titles with only a date as the distinction made archive research harder than it had to be.

1.I would have headlined the story of now fired visiting University of Tampa professor Ken Storey “Vicious, bigoted and possessed by the Demon Pazuzu is no way to go through academia, son,” but so many professors have used social media to make outrageous and offensive statements that the ethics issue is getting repetitious. (I think Jonathan Turley has done a post on each one of them, and will continue to on his blog.)

The question is whether a college or university is breaching its commitment to free expression and academic freedom when it fires a professor who says that all men are rapists, or that whites should be exterminated, or, in Storey’s case, 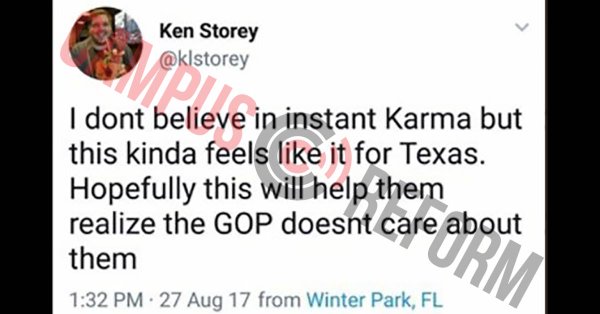 When asked later if this theory also applied to Florida,  and Trump supporters there deserved a similar fate.the Florida college professor replied,

“Yep, those who voted for him here deserve it as well.”

The answer is no. The university or college that fires an employee like Storey is protecting its reputation as a responsible institution, by stating in clear terms that people with terrible judgment and cruel and unethical instincts who are motivated by hate and intolerance are not qualified to teach….because they aren’t. That professors increasingly have no ethics alarms beeping when the prepare to publish sentiments like Storey’s (or worse) shows how thoroughly the leftist echo chambers of most campus faculties turn academics into Pat Robertson, which is to say, rigid, mean, and dumb. Once upon a time, liberals giggled themselves silly over the evangelical huckster’s periodic pronouncement about how a disaster was God’s way of punishing the U.S. for not abusing gays sufficiently, or similar bile, Now they do the same thing, and expect their colleagues and students to applaud.

Ken compounded his ethical offense by the standards of Ethics Alarms by issuing a terrible apology that evoked the Pazuzu excuse. Realizing that he had gone too far, he tweeted,

“I deeply regret a statement I posted yesterday. I never meant to wish ill will upon any group. I hope all affected by Harvey recover quickly.”

Translation: “Oops. My hateful expression of glee over the tragedy afflicting Texans seems to have put my job in jeopardy. I regret that, so I have pulled down my tweet and am pretending to be sorry. I never meant to wish ill will upon any group, even though somehow my tweet wished ill on a group in the clearest terms, and I doubled down on it. Someone or something else must have been responsible. I hope all affected by Harvey recover quickly. (Saying that will let me keep my job, right?)”

This is a #10 apology on the Ethics Alarms Apology Scale, the worst there is:

An insincere and dishonest apology designed to allow the wrongdoer to escape accountability cheaply, and to deceive his or her victims into forgiveness and trust, so they are vulnerable to future wrongdoing.

2. Speaking of phony apologies, Kathy Griffin, she of the Bloody Head, went all the way to Australia to reveal that she really isn’t sorry about representing that the beheading of a U.S. President is hilarious:

Griffin: Correct. I’m no longer sorry. The whole outrage was B.S. The whole thing got so blown out of proportion. And I lost everybody; I had Chelsea Clinton tweeting against me. I had friends, Debra Messing, from Will and Grace, tweeting against me. I mean, I lost everybody. And so I have been through the mill, I also, I didn’t just lose like, one night on CNN; my entire tour was canceled within 24 hours because every single theater got all these death threats. I mean, these Trump fans; they’re hard-core. They have, like, robocalls, and they’re a minority, but they know how to act like they’re a majority.

Interviewer:…Debra Messing and Chelsea Clinton aren’t Trump fans; even Democrats said it was out of line. I get that comedy is about pushing the boundary, and being politically incorrect and that’s fine. But do you not agree that that picture, holding up a severed head, I know it’s a mask, covered in tomato sauce, but do you do not accept that was a little bit over the line?

Griffin: No, you’re full of crap. Stop this. You know this. Stop acting like my little picture is more important than talking about the actual atrocities that the President of the United States is committing, and I’m also on a mission to tell people honestly if it happened to me, as big-mouthed and obnoxious as I am, it can happen to you.

Griffin would sustain a whole case study in what happens when one lacks ethics alarms. or any basic training in ethical reasoning. She’s living, breathing, blathering argument for ethics instruction in the schools. (So is President Trump.) What she doesn’t understand would fill a book, but among them are these:

B. Loyalty does not require friends, colleagues and allies to pretend that what is wrongful is right.

C. In a nation that has suffered through four Presidential assassinations and at least five other serious attempts, appearing to call for another is not a joke, or likely to be treaed as acceptable conduct.

D. The reason Griffin has lost engagements and jobs is the attitude she just expressed. She has revealed herself as lacking judgment and the ability to know where societal lines lie. She is untrustworthy.

E. No, Kathy, it can only happen to us if we hold up the President’s bloody head, lie about being sorry, and the admit that the apology was a sham.

G.  Rationalizations evoked or nicked  by Griffin in this brief interview segment:

I’m sure I missed some…