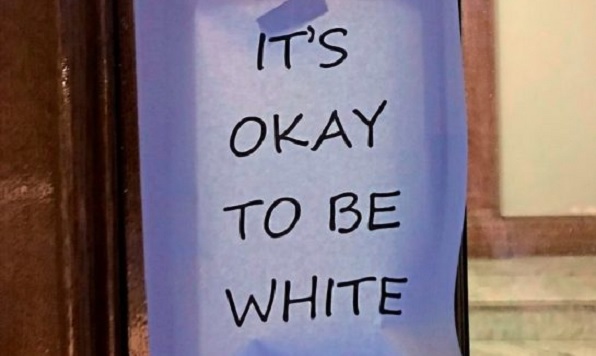 More than a dozen handmade stickers reading “It’s okay to be white” were posted around overnight in Harvard Square earlier as well as around the nearby Harvard Law School campus.

Law School Dean of Students Marcia L. Sells, who is black, wrote an email to law students in the wake of what Stephen King might call “The Stickering”:

“It seems likely that these anonymous postings, made in the middle of the night, were provocations intended to divide us from one another HLS will not let that happen here. We live, work, teach, and learn together in a community that is stronger, better, and deeper because of our diversity and because we encourage open, respectful, and constructive discourse”

Your Ethics Alarms Ethics Quiz of the Day—and watch your step!—is…

Do you think posting the stickers was unethical? Do you think the Dean’s response was responsible?

I have a few matters to note and subordinate queries…

Does it matter who came up with the slogan and why?

Of course this was the inherent “When did you stop beating your wife?”-style trap in the stickers. Nevertheless, why isn’t that a fair and natural response to the Dean’s words?

Okay, next move in this game: put up some signs saying “It’s okay to be black.” See what Harvard does then. Dares Harvard denounce those? But under these circumstances, dares she not?

The question answers itself.

I would guess these are on the way. And…

and finally, this disturbing prediction…

The end result of this will be a stunning and amazing backlash. People can only put up with BS for so long before they strike back. Slaves struck back; freed blacks struck back; what’s happening now is a corrosive racism predicated on the notion that whites have been guilted for the past two plus generations and can now be done away with. In sum, the idea is whites are sheep, and it’s now time to slaughter.

We can thank Barack Hussein Obama for bringing it to the surface—it was always there, but Obama encouraged the corrosive racism to bloom in full sunlight. He did the country a huge favor because the end of this all will be a huge purgation on both sides, black and white. At the end of it, nobody will hate anybody for their “privilege”, and nobody will feel guilty—one hopes.

Some people will die, but death is necessary to catharsis. It’s up to a lot of people to decide if they want to purge themselves or if they want to be purged. Either way, the catharsis will happen, and it will not be fun.

UPDATE: I was going to stop there, but what the Hell: here’s my reaction:

1 The sticker is brilliant no matter who came up with it or what the motive was.

2. Anyone who is troubled by the message is part of the problem the stickers are responding to.

3. The stickers would be harmless if they were treated as harmless, and they should have been.

4. The Dean’s response was not only irresponsible, but incompetent.

58 thoughts on “Ethics Quiz: “The Stickering””