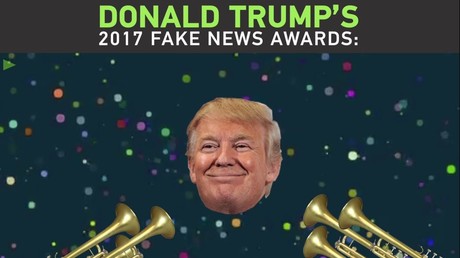 I don’t really care what the President says is fake news. What matters on Ethics Alarms is what I decide is fake news. His much ballyhooed list of fake news items ignore that many inexcusable examples that have nothing to do with him, like various stories designed to impugn conservatives and normal people because journalists think they are stupid, or intentionally misleading headlines, or when reporters sneak false characterizations into their “news stories” as facts, or publishing gossip as fact using anonymous sources,  or passing along falsity in the course of reporting a related matter, as in this instance, when NBC’s reporter said, “President Donald Trump returned to one of his most derogatory insults Friday, referring to Massachusetts Sen. Elizabeth Warren as “Pocahontas” — a jab at her Native American ancestry.” (Psst! NBC! Senator Warren has no Native American ancestry.)

However, Ethics Alarms is duty bound to assess the President’s “2017 Fake News Awards,” which he released last week.

No, I don’t believe he should be releasing such awards. It’s beneath the Office,  and he isn’t Seth Myers. (If there were a a fair, satirical comic who made any attempt at partisan balance, this would be a good gimmick for him or her. There isn’t. That’s another problem.) Here is the list, with comments from me:

#1. “The New York Times’ Paul Krugman claimed on the day of President Trump’s historic, landslide victory that the economy would never recover.”

Comment: Ugh. Signature significance for bad staff work and stupidity: the very first item isn’t fake news, wasn’t news at all, and didn’t even occur in 2017.  On election night in 2016, Krugman stated a prediction and an opinion, and made as ass out of himself. That’s certainly not news. So right off the bat, we know that the 2017 “Fake News Awards” are more about using these items as an excuse to trumpet Trump’s successes.Got it.

If I didn’t have to, that would be sufficient to make me stop reading, or caring.

Comment:  #2 and #3, both covered on ethics alarms, are the crown jewels of the fake news collection, among the  hundreds that shredded the mainstream media’s reputation for trustwortiness durin the year.  For the Whataboutists out there—and you know who you are!—these two alone destroy the “But Fox News was just as unfair to Obama!” baloney. In 8 years, no story broken by Fox were as unforgivable as Ross’s bombshell claim that Brian Ross went live on ABC last week and announced the fake news story that then-candidate Donald Trump had instructed Michael Flynn to make contact with the Russians, that smoking gun that all “the resistance” had been searching for, dreaming about, wishing were out there. It triggering a massive stock market sell-off. Seven hours later, ABC sheepishly admitted that it was President-elect Trump who had made the request of Flynn, which is called “being President.”    Ross was suspended for four weeks without pay, and ABC said he wouldn’t be trusted to cover the President any more. This itself was outrageous: if he’s so biased that he can’t cover the President, Ross is too unprofessional to be a journalist at all, certainly at ABC News. (Maybe for the Hooten Holler Gazette.) So far, Ross has yet to resurface, though his exile was supposedly up.

The CNN botch was arguably worse. All morning and into the afternoon, CNN proudly touted a “Breaking News” banner with a “CNN Exclusive” that read the following: “Emails Reveal Effort to Give Trump Campaign WikiLeaks Documents.” The Resistance was jubilant! Maxine Waters, Charles Bow and Al Green were probably together popping champagne corks (while my Facebook friends held a wild party they didn’t invite me to) when The Washington Post broke the sad news that the story mas materially false. Someone, a real reporter, had acquired the email this “bombshell” was based on. Someone named Mike Erickson emailed Trump Jr. and others on the Trump campaign on September 14, 2016 with  a link to Wikileaks documents as well as a decryption key to access them. CNN reported that the email had on  September 4. The ten day difference (Oh, is that a 1 before the 4? Damn. I thought we could finally impeach the bastard.) was the difference between real news and fake news, because WikiLeaks had released a batch of stolen documents to the world on September 13. The group was proclaiming its release of the DNC documents, which were published by Guccifer 2.0. The Trump campaign hadn’t been offered special access. Everyone had access.

Nevertheless, CNN kept its false story up long after it had been debunked, and it was repeated all over the net and cable news.  Then it let Brian Stelter, it’s fake journalism watch-dog, come out and make excuses. To this day, CNN hasn’t taken responsibility.

I know the dodge from the “the news media isn’t the enemy of the people and how dare the President say such a thing!’ gang—and you know who YOU are—this wasn’t fake news. It was just an honest mistake, not deliberately made up fiction, because only that is real fake news. (“Real fake news” is a wonderful oxymoron, don’t you think?)

Not by the standards here, which are the correct ones. It is fake news when the public is materially deceived by the newsmedia either publishing falsehoods, as in #2  and #3, because its reporters are blinded by confirmation bias and partisan bias. It is fake news when important stories are buried, ignored or de-emphasized to serve partisan political goals, or because the biases of the reporters or journalists cause them to convince themselves that what is news, isn’t. It is fake news when the sheer volume of coverage falsely leads the public to think that something is more significant than it is—we have seen this constantly lately in the attention given to a book of gossip and rumors, “Fire and Fury,” a rogue and unlicensed psychiatrist’s claims that the President is dangerously impaired, the still-unsubstantiated “shithouse” claims, and the President’s physical check-up. Whether the reason is incompetence, bias, or maliciousness, the results are the same: the public us deceived, and democracy is hobbled. Ethical journalists make rare mistakes and correct them quickly and prominently. Unethical journalists make mistakes constantly, have to be caught by others, and cannot be trusted not to make the same or worse mistakes again.

COMMENT: This oldie but goodie was an early salvo in the news media’s “Trump is a racist” campaign, which is really cooking now.

COMMENT:This was an honest mistake by Washington Post reporter David Weigel, who apologized. It was honest, but it was prompted by confirmation bias, and bias makes you stupid. The only reason Weigel didn’t figure out that the empty arena couldn’t reflect the crowd at a Presidential appearance is because he and his colleagues wouldn’t cross the street to see Trump if it wasn’t their job, so he convinced himself of fake news, and then used Twitter to circulate it.

COMMENT: I called Koigate  “fake news, unconscionable confirmation bias, and a new low of manufactured anti-Trump bile from the mainstream news media,” which it was, though the Yale psychiatrist story was arguably worse. Koigate is more important than its trivial premise— THE PRESIDENT OVER-FED THE GOLDFISH!!!!!! NOOOOOOOOO!!!—because it is signature significance of the degree of contempt and hate the news media has for the President of the United States.

#7. CNN FALSELY reported about Anthony Scaramucci’s meeting with a Russian, but retracted it due to a “significant breakdown in process.”

COMMENT: I don’t know why or how Ethics Alarms missed this one.

COMMENT: Cheap. It’s not fair to include Newsweek anti-Trump fake news in the Fake News Awards. Newsweek has become a sad, clickbait-seeking shill for the “resistance, kind of a left-wing Gateway Pundit with a respectable past. This is the magazine the sent out an issue announcing that Hillary was the next President. This week, it was part of this fiasco.

#9. CNN FALSELY reported that former FBI Director James Comey would dispute President Trump’s claim that he was told he is not under investigation.

COMMENT: Yes, CNN has been out to “get” Trump all year, and these awards just scratch the surface. The network’s producers, reporters and editors begin from the premise that he is lying and has been engaged in nefarious activities. It should be embarrassed. It should be in the middle of a major ethics audit and restructuring. It should have forfeited any trust and respect by most TV news viewers. But is has prospered by appealing to viewers who share the same biases. No, that’s no way to practice journalism, but it’s a successful business model.

#10. The New York Times FALSELY claimed on the front page that the Trump administration had hidden a climate report.

COMMENT: This is what’s annoying about the “awards.” They were hyped for so long, but look as if they were thrown together at a spitballing session by  a handful of interns in about 15 minutes. (In fact, these are endemic problems with the Trump White House, and Trump: sloppiness, lack of diligence and inattention to detail.) Why pick this out of so many worse examples, like when the Times ran “For, $200,000, A Chance To Whisper in Trump’s Ear At Mar-a-Lago”

on the front page. Without any evidence, the Times stated as fact what was just nasty supposition and assumption on the front page. I assume that it didn’t make the list because it’s not a black and white “The news media said X, and the truth was not-X” variety of fake news, but that headline is really an example of a more sinister variety, as I explained here, “the kind that the biased news media defenders deny is fake news, because it contains facts and is merely deceitful, misleading, hyped and given far more prominence than the facts deserve. But all that makes it fake, because it misleads readers, and is intended to. It’s on the front page, so this must be important, think the Times’ readers, forgetting, or ignoring, the fact that this very paper vowed to jettison journalistic ethics in October to make sure Donald Trump never won the Presidency. Now it is using its power and influence to prevent him from being President.”

But the White House assumes that the public is too dim to comprehend such nuances, and may be they are right.

#11. And last, but not least: “RUSSIA COLLUSION!” Russian collusion is perhaps the greatest hoax perpetrated on the American people. THERE IS NO COLLUSION!

COMMENT: This isn’t fake news. There are real investigations and real innuendos and dark predictions from prominent political figures and pundits. Oh, the news media is hyping it, and the topic has spawned lots of fake news about the investigations (like #2 and #3 above) . But “Russian collusion” is properly labelled a partisan fishing expedition and an unholy alliance between journalists, Democrats and the Deep State to sabotage the Trump Presidency and undermine public trust, not fake news.

13 thoughts on “Well, I Guess There’s No Way Around It: Considering The President’s Fake News Awards”