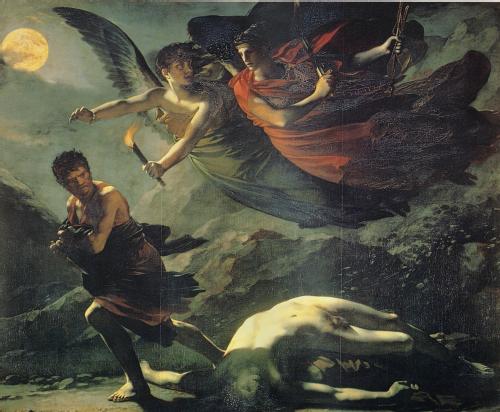 Here is slickwilly’s reflection on the breakdown of systems, human error, hubris and nemisis in his Comment of the Day on the post,The Wake-Up Call And The Power Cord:

The O ring failure had a great impact on young slickwilly, who was home on a rare sick day and watched the shuttle blow up live. The information that later came out made it clear that launching spaceships was fraught with danger, as there were so many things that could go wrong in such a complex system it was a wonder they ALL did not blow up.

My first and only brush with ethics (engineering: make sure the bridge does not fall down) was greatly reinforced by memories of that Shuttle disaster. (I still get chills when I think of the radio message “Roger, go with throttle up” which preceded that explosion.

The definition of hubris is “excessive pride or self-confidence” and comes from Greek Tragedy’s  “excessive pride toward or defiance of the gods, leading to Nemesis.” (NOTE: Nemisis was the vengeful Greek god who destroyed mortals guilty of hubris.)

Hubris is the hallmark of gun control advocates today. Hubris and callous disregard for the rights, dignity, and lives of responsible gun owners. Using young David Hogg as a useful idiot is par for the course: these are the same people who will tell you the criminal has rights which the homeowner violates when protecting himself during a home invasion. These tactics are despicable, beyond the pale of civilized society. That America has come to where such are excused and even encouraged means our society has fallen further than I had feared.

Hubris marked progressive governance this past decade as well. Promises made about Obamacare while knowing they were lies. Fast and Furious. ‘A video is to blame for Benghazi.’ IRS suppression of opponents to win the 2012 election. 30,000 email under subpoena erased ‘like with a cloth,’ and no one is even charged. Even the late assertion in the press that Obama was the first scandal free Presidency smacks of hubris.

Now we find that a falsified dossier was used, without support, to get a FISA warrant to spy on an opposition political candidate. That the federal bureaucracy was weaponized with the goal of removing a duly elected President. That FISA wiretapped US citizens were maliciously and illegally unmasked by Obama Admin officials for political purposes.

Hubris leads to nemesis, the “inescapable agent of someone’s or something’s downfall.”

The Democratic party is ripe for nemesis.

9 thoughts on “Comment Of The Day: “The Wake-Up Call And The Power Cord””