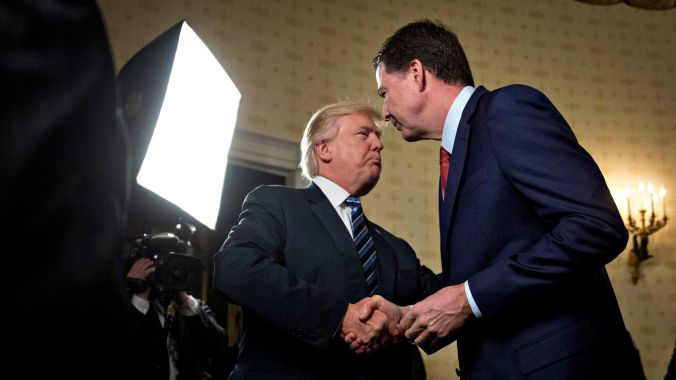 That was the measured, dignified description of the fired FBI chief in President Trump’s latest tweet on the matter of Comey’s tell-all book, “A Higher Loyalty: Truth, Lies and Leadership. The Ethics Alarms verdict on the allegation doesn’t require reading the book, which I wouldn’t do if Jigsaw had me trapped in a room and gave me the choice of writing a book report on it or chewing off my own foot. (Okay, maybe I’d read it then, but I’d still have to think about it.)

We know Comey is untruthful already—he lied to Congress—and the fact that his book exists proves that he’s a slimeball.

I know I repeat myself a lot, for ethics issues are on a merry-go-round that never stops. However, I think I’ve written more than enough about the unethical practice of government officials who have left an administration cashing in with tell-all books before the administration has ended. The practice  is a crass  betrayal, venal, disloyal, damaging to the nation and its institutions, and I don’t care who the slimeball author is, or which President he slimes. They are all slimeballs, by definition. One of the first was President Reagan’s arrogant Budget Director, Stockman, early in that administration. Prior to Stockman, the predominant attitude and ethics was the one embodied by General George Marshall (no relation, alas), World War One and Two military leader, former Secretary of State, and architect of the Marshall plan, when he was offered a million dollars to write his memoirs in the 1950s, after he had retired from public life.  Marshall turned down the cash, explaining that he couldn’t write a truthful memoir without undermining people still at working for the United States in the government and military.

How quaint! What a sap!

Or so James Comey probably thinks.

Comey’s book will eventually have a place next to Omarosa’s pulp White House memoir, and Steve Bannon’s as well, which should help put it into proper perspective, except for virulent Trump-haters, who have no proper perspective. You can just take out the original names in these posts and substitute Comey’s: here was what I wrote in part about Robert Gates’ literacy hit on President Obama after he left the Defense Department…

“Bottom line: these people betray their colleagues for money, and often, as is Robert Gates’s case, out of spite. Former Defense Secretary Gates, like the others, was given an opportunity to serve his country in a high executive branch position. He was privy to policy discussions and the inner workings of the administration. He was trusted. To reveal details of his tenure while the administration he worked for is still in office, done in a way designed to provoke criticism and embarrass his former associates and boss, is the height of disloyalty, and a breach of implicit confidentiality.

The honorable and ethical way to write such a book would be to wait until it could not actively interfere with the work of the Executive Branch. The people may have a right to know, but they do not have a right to know everything immediately. People in high policy-making positions must be able to be themselves, express opinions, and have productive meetings with the confidence that those they work with are not collecting notes for a future Book-of-the-Month sellout. Books like Gates’s undermine that trust, make it more difficult to get candid and controversial opinions and ideas into the decision-making process, and ultimately hurt all of us. The former  Secretary and those who appreciate the additional ammunition for administration-bashing can assemble a lot of rationalizations for the  book, but they all boil down to “Everybody Does It,” the most threadbare and cowardly rationalization of all.”

I should note that this paragraph was composed by substituting Gate’s name for that of Paul O’Neill in a still earlier post, President George W. Bush’s Treasury Secretary, who authored his tell-all to get even with Bush, and cash in, of course.

Not that it matters, but Comey’s book has made his intent unusually clear, even for the genre. He describes Trump as shorter than he expected with a “too long” tie and “bright white half-moons” under his eyes that he suggests came from tanning goggles.Comey says he made a conscious effort to check the president’s hand size, saying it was “smaller than mine, but did not seem unusually so.” Then there is the much quoted section in which Comey compares the President’s demeanor to that of a mob boss. This is petty, ad hominem stuff, and, as several commentators have accurately noted, undermines any false claim by Comey that his objective is anything but maximizing sales to  his target audience, “the resistance.” He was fired: if Comey wants to avoid the easy dismissal of his book as the revenge of “disgruntled employee,” then he needed to ensure that the book wasn’t written in the voice of a disgruntled employee.

Comey’s book will be far more damaging to the Justice Department, the FBI and the reputation of career law enforcement officials than it will be to President Trump.

A final observation: I defended Comey against the accusations of conservatives when he delivered his controversial conclusion that Hillary Clinton’s willful use of a private server that she knew would be carrying classified communications was short of criminal conduct. I also defended Comey against the howls of Democrats for his decision to send a letter to the House committee investigating the issue when Clinton emails were discovered on Anthony Weiner’s laptop, on the grounds that that he had promised to alert the committee if there were any new developments. Then today I read this excerpt, where Comey reflects on the latter action:

“It is entirely possible that, because I was making decisions in an environment where Hillary Clinton was sure to be the next President, my concern about making her an illegitimate President by concealing the restarted investigation bore greater weight than it would have if the election appeared closer or Donald Trump were ahead in the polls.”

Testifying before Congress, Comey emphasized—under oath— that political considerations played no part in his decision-making, nor that of his agency.

22 thoughts on “Is James Comey An “Untruthful Slimeball?””