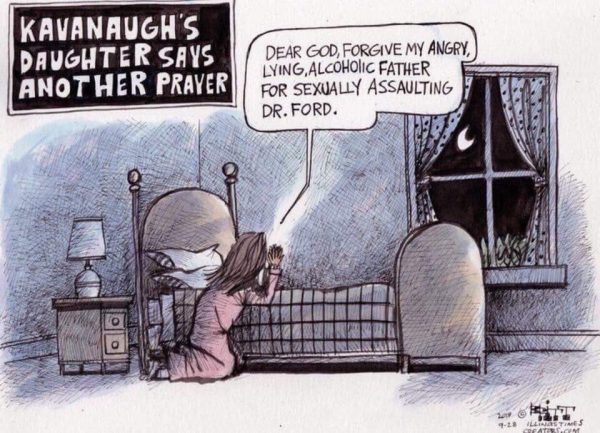 I’ve had this post composed in my head for some time, and have hesitated to complete it. I really don’t like upsetting people I care about, much as some might think otherwise.

However, there has been such escalating fanaticism on Facebook (and elsewhere, of course), ringing through the echo chamber, about how Dr. Ford must be “believed” and how the judge is a “serial rapist,” I have to ask: would you all treat me this way? Would you react to seeing my career and reputation derailed by the sudden appearance of a high school acquaintance who announces that she has only recently come to realize that I had sexually assaulted her at a party? After hearing my denials, would you decided to determine that her account, with no verification by any witnesses, with the large amount of time past and with absolutely nothing in my record, professional or private life, to suggest any such proclivities, should be sufficient to have me labelled as untrustworthy?

Don’t resort to the “but he’s going to sit on the Supreme Court” trick. I’m a professional ethicist: an accusation that is widely metastasized into doubts about my character, including using it to tar me a liar, would be just as ruinous to me as the late hit on Kavanaugh is disastrous to him. There is no “well, this is wrong UNLESS its a Supreme Court nominee” principle: that’s a pure rationalization. No, if the Ford accusation, with all of its flaws, its basis in fading and rediscovered memories, the fact that it involved juveniles, all of that, and the objective professional observations by Rachel Mitchell that found several reasons why Ford’s testimony was incredible, is still enough to allow you to condemn Judge Kavanaugh, then it must be enough for you to condemn me too.

But I’ll make it easier for you: let’s say its me that is the current Supreme Court nominee, and me that your favorite party has condemned as a threat to civilization. (And lets assume that you haven’t read any of my judicial decisions either.)

How could you  treat me that way? I’m trying to imagine anyone on my friends roster who wouldn’t have ample reason to dismiss Ford’s accusations against me as a mistake or a lie. Some of you knew me in high school. I made a lot of mistakes, but did anyone think of me as threat to girls? I had exactly two dates in high school. I know I went to less than ten parties in four years. I was at one–one–where drinking and strange activities in dark rooms were going on, and I suppose one of the women there could now hire Michael Avenetti and say that I looked like I was hanging around doors waiting to participate in a gang rape. Would you believe her? Well, if you would decide to believe her about Kavanaugh, and you know absolutely nothing that he has done in the last thirty years to suggest that he acted like that, I guess you would be just as willing to believe that about me.

Some of you have known me since college. I had my first kiss with a woman as a sophomore—she was drunk, I wasn’t, and kissed me. Come to think of it, she sexually assaulted me. I graduated without having sex, just like Kavanaugh says he did. I was, as always, involved in theater, and was at some pretty wild cast parties, including one that merged with an all-gay party in the same house. Does that make me guilty of sexual assault in high school? Does that make this accusation sufficiently reliable to justify harming me and my family  today?

My many friends from law school, I thought I could say with confidence, know that I was notable for my respectful treatment of women, particularly since a lot of stage directors–many of you know me from the shows I directed at Georgetown—take advantage of their position, and engage in subtle and not so subtle sexual harassment and worse. Some women from that period know that I intervened when actors mistreated them. Yet now it is conceivable to you that I am a ticking time bomb of sexual predation?

Some of you worked with me, and for me, at the U.S. Chamber, Georgetown, and the Association of Trial Lawyers, where I supervised several all-female staffs and mentored some of the young women in my charge. I never flirted with you, touched you, or in any way treated you with disrespect, in part because I grew up with a brilliant and accomplished sister, and was raised by a life-time  Boy Scout father owed his unshakable values to an amazing single mother, and he modeled absolute intolerance for any misconduct, sexual or otherwise, by men toward women.

In light of all this, and also considering how I have lived my life since I was married to my wife Grace, another brilliant woman, almost 38 years ago, I am stunned that anyone would take the word of a previously unknown accuser from the past over mine in a claim of sexual assault. Don’t tell me about all the women who are sexual assaulted and have reasons to not report it, and stay silent for years. That has nothing to do with me, just as it has nothing to do with Brett Kavanaugh. His accuser isn’t some abstract symbol of all the abused women in the world and through history. They don’t make her more or less fair or accurate when she comes out of the shadows to point to me to cue my personal destruction. She is a real person, and so am I. And the truth is that none of you have any more reason to doubt Brett Kavanugh’s denials than you would have reason to doubt mine, unless you had an ulterior motive to destroy my life and reputation, just as you have—you know you do, don’t bullshit me— a reason to destroy Kavanaugh’s.

You didn’t want him on the Supreme Court before Ford appeared, and you were thrilled to have another way to defeat him, even if it meant turning him into a target of hate.

This is called “the ends justifies the means,” or absolute utilitarianism, an invalid, unethical, ruthless and totalitarian way to treat people. The conduct also violates Kant’s Categorical Imperative, which holds that it is wrong to exploit another human being for another’s wants or need. That’s also what you are doing to Brett Kavanaugh, so I have to assume that if I stood in the way of a political and social agenda about which you were convinced must be the only good and true way, and that all dissenters and critics were not merely citizens with a different view, but enemies, you would allow Ford to wreck my career just as you cheered hr on last week.

Why wouldn’t I assume that? You have no reason to believe Kavanaugh is a simmering sexual predator, and no reason to think that of me, either.

You and all of the rest in the anti-Kavanaugh lynch mob don’t care about him as a human being, and know nothing about him or his character. He drank a lot in his youth. So did  many of my friends, and more of them used illegal drugs to excess. His alcohol abuse doesn’t mean he’s a sexual predator, nor does it mean he’s an alcoholic, not that some of the finest people I know aren’t alcoholics. (And thank you, Senator Whitehouse, for putting public understanding of this pernicious disease and its lack of any moral stain back 50 years. May you rot in Hell for that.)

Maybe because you actually know me, you are confident that would stop you from “believing” my completely unsupported accuser. Is that your thinking? Foul. The Golden Rule requires each of us to treat others as we would want to be treated, whether we like or know them, or not. Nobody reading this would feel fairly treated if, at a moment of a great personal and professional advance, a figure out of your deep past emerged to undermine everyone’s trust in you, based on something she said you did many decades ago. You don’t get to pick and choose who is worthy of being treated ethically, or decide that your agenda is more important than another human being’s life, or that getting your pathetic little “likes” and “loves” for joining a mob that wants to make the rejection of  decency a virtue suddenly justifies ignoring due process, which simply means fair and consistent standards that you would want applied to you in a similar situation.

By applying a cruel and unethical standard to Brett Kavanaugh, you are laying the bricks for this to be the standard for everyone, like me. I resent it, I fear it, and reject it. Another of Kant’s useful ethical clarifications  declared that if you believe  a system is ethical, then you should be willing to have it apply in all cases. This is the Principle of Universality.  If you are willing to apply this brutal standard to Brett Kavanaugh, then I have to conclude that your current position is either ignorant of ethics, ruthless, or a willing betrayal of our friendship—because you want the same standard to be applied to me. What did I do to you, or anyone, to deserve that?

Yes, I take this disgusting cultural and political moment personally. So should every male who could find themselves in range of a stranger’s accusing figure, and so should anyone who can wrest themselves from political mania and start thinking about what all of us owe everyone: reciprocity, fairness, compassion, empathy, the benefit of the doubt, and the presumption of innocence.