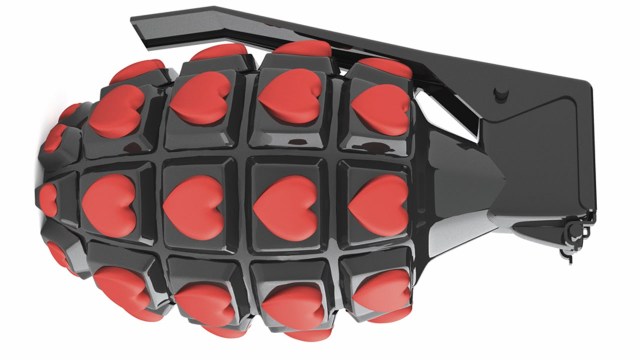 Why sheepish? Well, for an authority on rationalizations, it’s pretty embarrassing to have one of the most famous and oldest rationalizations of them all not appear until the 91st entry on a list being compiled for ten years.

Most people would guess that the old saying comes from Shakespeare. Nope: household name John Lyly, a poet, included the idea in his novel “Euphues: The Anatomy of Wit,” published in 1579, about ten years before the Bard wrote his first play. The novel recounts the romantic adventures of a wealthy and attractive young man, and includes the quote “the rules of fair play do not apply in love and war.”

As often happens, I stumbled on this prominent hole in the list while on another mission. A reader had questioned my criticism of George Bailey and his mother in the Ethics Alarms guide to “It’s a Wonderful Life,” in which they plot to snatch the lovely Mary (Donna Reed) away from George’s obnoxious  (“Hee haw!!”) old childhood friend and wheeler-dealer, Sam Wainwright. The reader’s argument was that Mary and Sam had made no commitment, and that she was obviously looking for a better match, so she was fair game for George. This sent me back to the movie, which I watched again last night. The key scene is this one: George is talking to his mother party for younger brother Harry and his new bride…

MRS. BAILEY
Did you know that Mary Hatch is back from school?

MRS. BAILEY
Kind that will help you find the answers, George.

MRS. BAILEY
Can you give me one good reason why you shouldn’t call on Mary?

MRS. BAILEY
Well, she’s not crazy about him.

GEORGE
Well, how do you know? Did she discuss it with you?

GEORGE
Well then, how do you know?

MRS. BAILEY
Well, I’ve got eyes, haven’t I? Why, she lights up like a firefly
whenever you’re around.

MRS. BAILEY
And besides, Sam Wainwright’s away in New York, and you’re here
in Bedford Falls.

GEORGE
And all’s fair in love and war?

So George knows that he’s crossing ethical lines by going after his friend’s object of desire, but allows the rationalization to assuage his guilt and mute his better instincts, which is what rationalizations are for.

This popular and well-traveled rationalization was first put into print by  16th century poet John Lyly, who wrote in his novel “Euphues: The Anatomy of Wit,” published in 1579, “the rules of fair play do not apply in love and war.” The tip-off that this is a rationalization, and was even in 1579, everything wasn’t considered fair even in war once mankind began civilizing beyond caves and clubs. By the time George and his mother had their fateful conversation in “It’s a Wonderful Life,” World War I had convinced the world that even warfare needed some agreed-upon limits. Chemical warfare wasn’t “fair.” Germ warfare wasn’t “fair.” Abusing prisoners or war wasn’t “fair.”

Moreover, Lyly’s statement was more bon mot than a literal statement meant to be taken seriously. The idea was, and is, to point out how ruthless romance can be, and how passion drives lovers to violate their own ethical principles. The statement doesn’t mean that all should be fair in love and war, but that both activities have been known to cause participants to cross lines of decency that should not be crossed.

The existence of the saying, however, is often sufficient for someone, like George, to justify behaving badly. Trying to take a woman away from a friend who is courting her is a basic Golden Rule violation, and something friends don’t do to each other without notice and consent. Thus it is comforting and convenient to have #69 available when hormones rage.

Plenty of old sayings are like that. We know they are not rules and even that they are ridiculous generalizations that are wrong as often as not. Other examples are:

“Early to bed, early to rise, makes a man healthy, wealthy and wise”

“Flattery will get you nowhere”

“The enemy of my enemy is my friend”

“The love of money is the root of all evil”

“The customer is always right.”

“A bird in the hand is worth two in the bush.”

“Slow and steady wins the race.”

“Better a live lamb than a dead lion.”

“He who fights and runs away lives to fight another day.”

“What doesn’t kill you makes you stronger.”

“Nothing is impossible to the willing mind.”

“Everything happens for a reason.”

“There are no coincidences.”

“God never gives you more than you can bear.”

“Sticks and stones may break my bones, but words can never hurt me.”