Having a nice day?

1. A tardy recognition of things to be thankful for. Several of the regular readers here, notably Other Bill, valkygirrl, Pennagain, Michael West, Neil Dorr and Zoltar, but also others, have been flagging ethics stories for possible Ethics Alarms coverage. This has been especially helpful during my recent bronchitis battle, but I can always use tips, especially since my amazingly productive ethics scout of many years, Fred, had to take his talents elsewhere. The best way to send me your links and recommendation is at jamproethics@verizon.net.

2. This explains a lot. Pollster Frank Luntz says that 67% of Democrats believe it is “definitely true” or “probably true” that “Russia tampered with vote tallies in order to get Donald Trump elected.” There is no evidence, none, that Russia tampered with vote tallies. There isn’t even evidence that Russian-planted “fake news” in social media and other meddling had any measurable effect on the election. Never mind: two-thirds of Democrats are convinced that Hillary Clinton couldn’t possibly have lost to a creep/Nazi/ lunatic/ moron/racist  like  Donald Trump without sinister forces making it so.

This delusion does explain a lot. As a foundation for false beliefs, it is strong impetus to confirmation bias, which Democratic officials and the news media have aggressively and cynically—and successfully—courted. I thought Republicans should hide their heads in bags after polls showed that about 40% of them as recently as 2016 believe that Barack Obama probably wasn’t born in the U.S. Two-thirds of Democrats believing Russians hijacked the election is, if possible, worse. Of course, Republicans didn’t force an endless investigation over Obama’s qualifications to be elected President, so that’s in their favor.

We do need a name for the Left’s conspiracy theorists regarding the 2016 election, though, since the group appears to comprise the majority of Democrats. “Truthers”…”Birthers”…and? 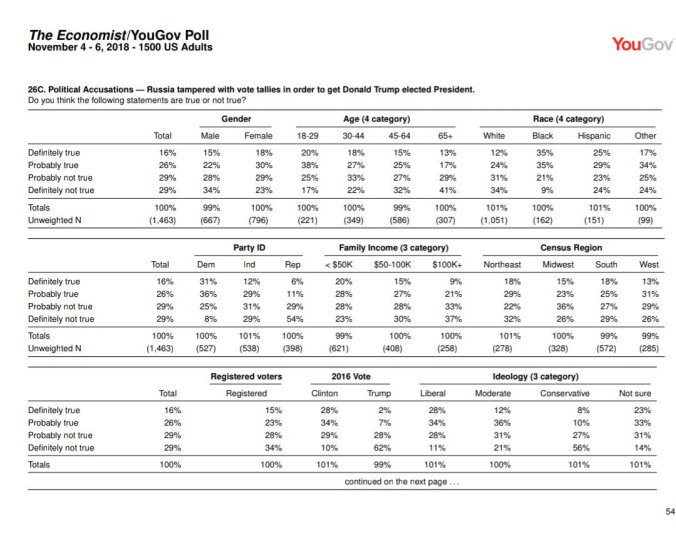 3. Nah, there’s no mainstream media bias! (1) The news about Paul Manafort’s travails with the Mueller investigation continue to be given front page headline coverage. In the New York Times, it is routinely in the main story column, front page, right hand side. Nobody can explain this, except as a pure guilt by association ploy. Manafort’s alleged crimes had nothing to do with the Trump campaign or Trump himself, and precious little to do with the Russian investigation. Manafort himself is only known at all because he was briefly Trump’s campaign manager. The Times and other news media have made this an ongoing story for no other reason or justification than to suggest wrongdoing by the President through innuendo. Anything to undermine public support and to prevent him from doing his job.

4. Nah, there’s no mainstream media bias! (2) Virtually every U.S. newspaper online used this headline to describe an incident at the border over the weekend: “Migrant mom falls from border fence, is impaled in front of her children.”  Many added “young children.” No, what happened is that an irresponsible mother endangered herself and her two young children trying to break U.S. law and enter the country illegally. The headline is calculated to create sympathy for the lawbreaker, as has the coverage of the caravan’s border push in general. Similarly, news agency photographers have chosen to take a disproportionate share of heart-tugging photos of mothers with young children at the border, giving the false impression that the army of would-be illegals is substantially composed of families. In fact, it is overwhelmingly male.

Apparently the conclusion has been reached by editors that the “Think of the children!” bias is strong enough to completely overwhelm the reason, logic and critical thinking of a majority of citizens, especially women and those who want open borders anyway.

5. Prediction: this will be the big new ethics story in 2019. The fact that social media platforms are deliberately manipulating public debate and opinion through persistent progressive bias has finally begun to escape the conservative media bubble, where it could be mocked and denied by the mainstream media and the beneficiaries of the manipulation, into other channels. Twitter recently went on a banning binge, cherry-picking conservatives for unspecified “violations” while allowing repeat hate-purveyors like Louis Farrakhan to tweet away unimpeded. The tipping point may be the bizarre episode where Twitter “permanently” banned conservative radio host and commentator Jesse Kelly for vague offenses, and told him there was no appeal. Right-winged law professor Glenn Reynolds, who had already had his account suspended and restored last year, announced that Twitter was engaged in ideological censorship and that he was closing his account for good. Reynolds is a regular USA Today columnist and perhaps the most read conservative blogger, and his noisy withdrawal threatened to provoke a mass Twitter exodus. Yesterday Twitter restored Kelly’s privileges, dishonestly claiming he was never banned, only suspended. Now Congress is investigating whether Twitter CEO Jack Dorsey lied under oath when he testified that his platform employed no ideological or partisan litmus test for continued use of the platform.

46 thoughts on “Mid-day Ethics Warm-Up, 11/28/18: Thanks, Twitter, A Properly Derisive Label Needed, And More Mainstream Media Bias That Is All In My Mind”