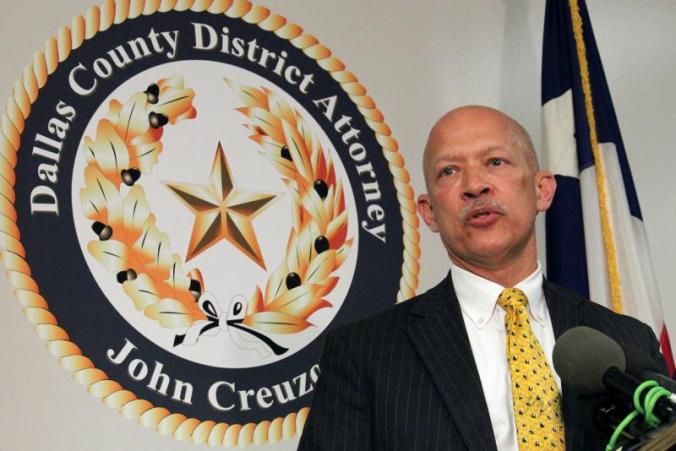 “Should All Thefts Be Prosecuted?” the headline asks rhetorically. Is the Pope Catholic? Does a bear…never mind, you get the point. Of course all thefts should be prosecuted, just like all laws should be enforced. It is a stupid question, and should be immediately recognized as such, yet, that headline goes on tell us, “Dallas County’s District Attorney Says No.”

Really? Then he is unqualified for office, an ethics corrupter, and a carrier of ethics rot. That DA—his name is John Creuzot–should resign, or be impeached. A prosecutor who doesn’t believe in enforcing laws is an unethical prosecutor, an untrustworthy prosecutor, biased and dangerous to society.

Creuzot has announced several measures of varying levels of justification and controversy to reform the justice system, which is certainly not without need to reform. However, one of them is unethical in multiple ways…

Study after study shows that when we arrest, jail, and convict people for non-violent crimes committed out of necessity, we only prevent that person from gaining the stability necessary to lead a law-abiding life. Criminalizing poverty is counter-productive for our community’s health and safety. For that reason, this office will not prosecute theft of personal items less than $750 unless the evidence shows that the alleged theft was for economic gain.

Creuzot explains that prosecuting poor people for stealing essential items wastes taxpayer money because they won’t come out any more financially stable after they serve their sentence, and prosecution won’t help the business that was robbed. “The question is, if we put them in jail, are they going to pay restitution? You know what the answer is: No,” Creuzot said. “So we’ve burned up taxpayer money for a hungry person or a needy person under this fake premise that we’re going to get the money back. And it doesn’t happen.”

Of course, sometimes that $750 limit won’t be recognized. “If they’re stealing $750 worth of diapers, let’s be honest: It’s going to take a lot of rear ends to put $750 worth of diapers on, so that probably doesn’t fit that category and so we would prosecute that case,” Creuzot says.

In other words, Creuzot thinks it’s just to prosecute some people  for violating laws, and not to prosecute others for violating the same laws. This is not only destructive to the rule of law, undermining citizen belief in the justice system, and an official green light for the “right” people to take the property of others because they really really need it, it is per se discrimination, a violation of the Constitutional principle of Equal Protection, and a dangerous expansion of prosecutorial power. Heads should be exploding all over Dallas.  To begin with law breakers are punished because if they aren’t punished, there’s no incentive to abide by the law, not because they will “pay restitution.” Moreover,  Creuzot’s formula sounds nice, but is ridiculous in practice: “Let’s see, well, you stole $700 worth of food, but you look hungry and have kids, so its OK, but YOU stole $400 worth of steaks, and you look pretty chunky, plus you have a job…but wait, you’re not going to fence the steaks, are you? I guess that’s OK too. It’s not like if you stole diapers, unless you were planning on eating the diapers, of course. Now, if you stole the $400 worth of steaks from the poor, virtuous thief who stole the $700 worth of food, then that IS theft, unless you’re somehow poorer than  he is…”

WHAT? This is a deadly slippery slope “justice” system that encourages and de-stigmatizes theft, removes protection from targets of theft, and allows the DA to factor in race, ethnicity, health, age and any number of irrelevant factors—and anything else he wants to– to justify prosecuting some citizens while other citizens go free and unpunished for the exact same crime. It is, however, a predictable result of years of false and insidious arguments that that there is a difference between good illegal immigrants, who shouldn’t be prosecuted because of who they are and the good reasons they had to break our laws, and the bad illegal immigrants.

If one has swallowed that unethical argument, the poison peddled by Dallas’s DA seems almost tasty.