Having a delightful afternoon I hope?

1. “Ethics Bob” is back! After what I gather have been extensive world travels with his wife, Ethics Bob  reanimated his blog this week, and I am hoping that Bob, who kindly credited me with inspiring him to write his ethics book, and who teaches ethics himself, will begin commenting again on Ethics Alarms. He is that rarity around here, a committed liberal who plays fair in debates. Unfortunately, Bob’s return post is wrong—and I distinctly remember a lunch with Bob in which he insisted that Bill Clinton shouldn’t have been impeached—but that’s OK.  He’s ethical, thoughtful, and open-minded. Check in with him, and hope along with me that he starts checking in here.

2. How much hypocrisy can Democratic voters stand? In Virginia, Lt. Gov. Justin Fairfax has been hit with multiple allegations of rape and sexual assault. Despite the lip  service the national party has given to “believe all women,” and its position during the Kavanaugh hearings that accusations alone were enough to disqualify a judge for the Supreme Court,  Virginia  Democrats refused to join Republican efforts to sanction or remove Fairfax, who is black and the #2 official ins a state where #1 has admitted to wearing blackface. In order to show that they don’t approve of Fairfax (while not having the integrity to make him hew to the standards they have been advocating for years) the Democratic Party of Virginia rejected his $2,500 donation for the party’s Blue Commonwealth Gala in June.

“We were not comfortable accepting the Lieutenant Governor’s PAC’s contribution and we let his team know that when they reached out,” party spokesman Jake Rubenstein told the  The Washington Post .

“The Lt. Governor’s We Rise Together PAC was planning to have a group of African-American pastors and other supporters sit at his table,” Fairfax spokeswoman Lauren Burke told the Post. “He is innocent and has passed two polygraphs and repeatedly called for an investigation. DPVA has assumed he is guilty of a violent criminal act with no investigation or even a conversation to ascertain his version of events.”

But if the party believes Fairfax is guilty of violent crimes and #MeToo outrages, why is he still in office?

In related news, serial sexual harasser and assaulter Joe Biden announces his candidacy for the Presidency today, as he leads the 21 candidate field for the “party of women.” There is photographic evidence that Joe actually  did (does?) the kind of things Al Franken was accused of doing, as well as a Who’s Who list of disgraced leaders in the arts, journalism and industry. An internet  meme that can be trusted to follow Joe around like Lassie followed Timmy: 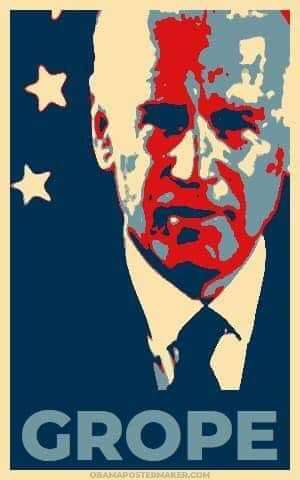 No, it’s not unfair. Biden, who has been signalling his opposition to harassment as if he would never touch a woman without her consent, is a hypocrite, bidding to make his party and its supporters hypocrites too. Well, bigger hypocrites…

3. Segue 1! “Biden’s announcement video is anchored in a demonstrable lie, “says Ann Althouse, and correctly so. She writes,

Biden’s blandly earnest face asserted that Trump said some of them “are fine people.” But Trump did not say that! It’s absolutely established that Trump excluded those people explicitly before saying that there were some fine people on both sides of the question of keeping Confederate statues. (At the time of the fine people remark, Trump said, “I’m not talking about the neo-Nazis and white nationalists because they should be condemned totally.”)  How dare Biden rest his campaign on a blatant lie — a lie that has been used to stir up fear and racial discord?!

How dare he? Come on, Ann: the media has been pushing multiple Big Lies like this since 2016. Biden dares because his party endorses the unethical tactic, the news media deceives the public, and Democrats and the Get Trump mob don’t care about the truth.

4. Segue 2! And speaking of shameless hypocrites like Biden.…KABOOM! Yes, this exploded my head:  Former Attorney General Eric Holder told an audience  that Attorney General Barr  needed to realize that he is “the People’s lawyer, not the President’s lawyer…You have a responsibility to run the Justice Department in a way that is not political.” Jonathan Turley nicely sums up how ridiculous this is coming from Holder:

Attorney General Eric Holder who was viewed as a highly political and intensely loyal member of the President Barack Obama’s cabinet. That reputation was highlighted when Holder proclaimed that he was “I’m still the president’s wingman”…[The criticism of Barr] was crushingly ironic from a nominee who had to promise not to put politics ahead of his oath given his role in the abusive use of pardon powers by Bill Clinton. Clinton not only pardoned his own brother but pardoned Marc Rich, a fugitive from justice who was also a major Democratic donor. Rich remains one of the least worthy pardon recipients in history and Holder had to promise that he would serve as an apolitical Attorney General. Holder was later repeatedly accused of being uncomfortably close to Obama as his self-proclaimed “wingman.”

Holder also refused to allow the Justice Department to do a serious investigation of the IRS scandal, which might have ended up looking into “what the President knew and when did he know it.”