(I have already made up my mind about this one, but I’m willing to be persuaded otherwise…hence the quiz.)

At the start of the bottom of the third inning of the May 7th Marlins-Cubs game, the NBC Sports Chicago broadcast went to analyst Doug Glanville for some “in the stands” commentary. Behind Glanville,  , a fan in a hoodie waved hello to the camera, flashed a peace sign, then made an upside-down OK hand gesture with his fingers.

Always looking for outrages and ways to hype racial tension, sharp-eyed activists flooded  the Cubs  with tweets like this:

@cubs @dan_bernstein What say you about this racist fan flashing a white power sign behind Mr. Glanville at tonight’s game? pic.twitter.com/zR7DqYWgQv

Whether or not that gesture is “racist” is a matter of opinion, debate, and context. Annoyingly and self-consciously “woke” lawyer-NBC sports blogger Craig Calcaterra explains:

It’s worth noting that this gesture is . . . a somewhat complicated one. While the Cubs are properly investigating this, the full context of it and all that surrounds it is worth appreciating before reaching a conclusion on the matter.

As explained here by the Anti-Defamation league, that “OK”-style gesture was originally cast as a “white power” symbol as a trolling hoax by some associated with the alt-right movement. The idea: lots of people make “OK” symbols on camera and, if enough people believed it actually meant “white power,” people who are not engaging in racist behavior would be accused of doing so, thereby undermining legitimate claims of racism as liberal hysteria or people crying wolf.

Then a “funny” thing happened: actual white supremacists started adopting the gesture, allegedly ironically. Irony sort of fails, however, when the person acting “ironically” in this way is, in fact, a white supremacist. Mostly because we are what we do, even if we think we’re acting in such a way “ironically” or even if we’re trying to muddy the waters in some effort to lean-in to a some group identity or belief system. As such, if someone who is cognizant of all of this stuff flashes this symbol as a “joke,” it’s still an offensive act.

It is also worth noting that the symbol flashed here is also similar to the so-called “circle game” with which most people who attended middle school at one time or another are familiar. Kind of a “made you look” thing. Which, in addition to the common “OK” symbol, was something the trolls who created the originally phony “white power” narrative were trying to make people confuse for racism.

Offensive! Hate fingers! Must be punished!

The Cubs, and I will say “of course” because no organization in sports apparently ever has the guts to say, “Yeah, fine: forget it. This is trivial,” announced with great gravity that it was “investigating”..

We are currently investigating an incident that occurred during the Cubs’ May 7 broadcast on NBC Sports Chicago while reporter Doug Glanville was on the air. An individual seated behind Mr. Glanville used what appears to be an offensive hand gesture associated with racism.

Such ignorant and repulsive behavior is not tolerated at Wrigley Field. We are reviewing the incident thoroughly because no one should be subjected to this type of offensive behavior.

Any derogatory conduct should be reported immediately to our ballpark staff. Any individual behaving in this manner will not only be removed from the ballpark, but will be permanently banned from Wrigley Field.

Boy, that’s some investigation, since the team has already decided what the fan meant, or that whatever he meant, the fact that he dared to make an “O” with his digits made him unfit to attend a baseball game. I find it fascinating, but typical, that even though Calcaterra understands and explains that the gesture is ambiguous, he still endorses an “investigation.” Here was what I wrote on the NBC baseball site:

Please note: this sports writer, an alleged lawyer, actually applauds a baseball team investigating a 100% legal hand gesture so it can punish the gesturer in order to signal its oppressive virtue and wokeness to the Great Enlightened.

The Cubs’ statement and Craig’s endorsement are both more offensive than an OK sign. Imagine–the moment can and should have been ignored for the trivia it was, but some crazed social justice warriors demanded to the Cubs that the finger-miscreant be tracked down, shamed and punished, and the Cubs, rather than having the common sense and perspective to say, “Oh, get a life, you fools” complied because they feared a Twitter mob attack. Then Craig gives the gesture even more publicity, pretending to be rational but still endorsing the investigation. And if the fan says, “Oh, no, I was just saying that everything was OK!”, how exactly will the Cubs prove otherwise? Torture him? Truth serum?

This would have been a valid story if Craig had the sense and integrity to condemn the Cubs’ hysterical over-reaction. Instead, he supports it.

I expected to be slugged with a thousand “thumbs down,” since the readership on that site is only slightly less leftist that Craig is, but no! The “likes” are running ahead of the “dislikes” 3-1. There is hope.

The other shoe dropped yesterday:  The Cubs announced that they tracked down the fan and have banned him from Wrigley field for life. Cubs President of Business Operations Crane Kenney said that team execs met and decided it was more likely the gesture was used in a “racist way,” and banned the fan. You know, that old, traditional “more likely” standard.

Translation: they decided that it was easier to unjustly ban a single fan than endure an orchestrated boycott or some other mass protest.

The Cubs  got the fan’s contact information via ticket vendor StubHub—StubHub should be condemned for this— and sent the miscreant a letter informing him of their decision. That’s right: the investigation didn’t include speaking with him , or getting his side of the story. Now the fan can be prosecuted for criminal trespass if he tries to enter the ballpark.

Team president Theo Epstein called the incident “truly disgusting,” and said “It gave me shivers to watch that, that that would take place at Wrigley Field.” That’s funny…I find it disgusting that a business would ban a citizen from its premises for life based on fear, assumptions, and a fake “investigation” without any due process whatsoever, in order to police what fans do with their fingers and make sure they toe the line regarding “acceptable” expressions.

But as I said, I’m willing to be convinced that I am wrong and the Cubs are right, so here is your Ethics Alarms Ethics Quiz of the Day:

Was it ethical for the Cubs to investigate and ban the fan for his circle gesture?

Oh, I nearly forgot…not to influence you, but here is how silly this has become in our fair nation—this is how many TV stations and websites reported the story: 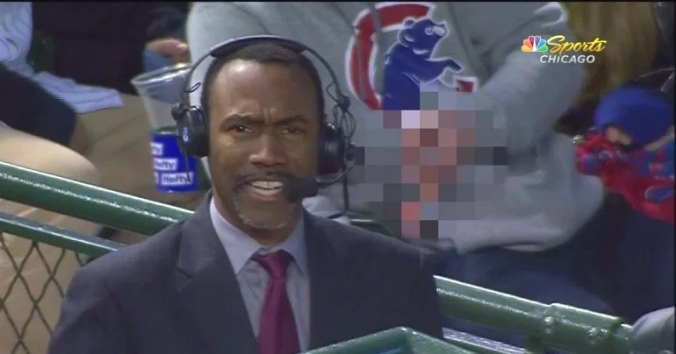