U.S. WWII veterans from the United States attend a ceremony at Normandy American Cemetery and Memorial situated above Omaha Beach to commemorate the 75th anniversary of the D-Day, in Colleville-sur-Mer, France.

I have a special reason for being a devotee of D-Day: I may be here because my father missed it. He was supposed to be in the invasion, but as an observer, not a combatant. Dad never explained how he got that plum assignment, but before he had the honor, an idiot in his company blew part of my father’s foot apart while playing with a hand grenade nearby. (You’ll be happy to hear that said idiot advanced human evolution by blowing himself up in the process.) Thus Jack Sr. was in an army hospital on June 6, and had to wait for the Battle of the Bulge to be part of an iconic W.W. II conflict.

1. Somehow, I don’t think this is the society they thought they were fighting for…

Boy, what a prude.

I just saw another of the increasingly common TV ads where evoking a vulgar word is used for humorous value.  One of the cell phone networks includes an exclamation of “Holy shirt!” (Get it? HAR!) when a father’s gray attire suddenly explodes into color as soon as the family upgrades its network.  “What the Shirt” is also a trendy shirt company.

In a culture where casual public vulgarity is treated as normal and even clever, it is no surprise that alleged professionals often have no functioning ethics alarms regarding their language, or any sense of respect, etiquette, gentility or decorum. After all, when a newly elected Congresswoman thinks it’s appropriate to shout “We’re going to impeach the motherfucker!” and suffers no adverse consequences, what do we expect?

2. Somehow, I don’t think this is the society they thought they were fighting for…wait, didn’t I just write that?

Sueretta Emke complained that she was dining with her family at a Golden Corral in Erie, Pennsylvania, when the manager told her that her attire was inappropriate and that some customers had complained. Asked Emke said the manager couldn’t answer when she was asked what was so inappropriate about her outfit. It was a mystery! 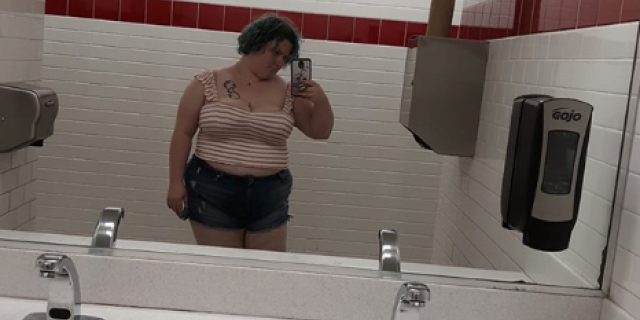 For some reason the phrase “res ipsa loquitur” keeps coming to mind.

Call me crazy, but I doubt that if  Ms. Emke’s croptop and Daisy Dukes had fit her more like this… 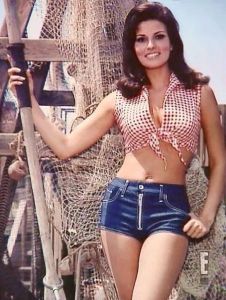 …anyone would have complained, or even if someone had, that the manager would have ejected her.  She was being fat-shamed. On the other hand, even at a Golden Corral, diners should have enough respect for others to adopt at least minimum standards of appropriate attire. On the OTHER hand—Did you know that Edward Albee wrote a play called “The Man With Three Arms? It was not a success—unless restaurants have stated, publicized and displayed  dress codes, it is unfair to arbitrarily discriminate against the unattractive exhibitionist and slobs while allowing the attractive ones to dine unmolested.

3.  Somehow, I don’t think this is the society they thought they …Funny, I just had the weirdest feeling of déjà vu!

At John A. Johnson Achievement Plus Elementary in St. Paul, a little girl was getting ready to go outside and play  when she placed her backpack on the floor and heard a loud thunk. The 8-year-old  student opened the bag, and found a handgun She immediately told her teacher.

The principal secured the gun, which was loaded. The child told police she didn’t know how the gun got into her backpack, and she was released to her mother, who is  the owner of the gun.

The letter sent to the girl’s parents said that “there are consequences for students in situations like this.” Observations:

4. But they WERE fighting for flag, country, motherhood, apple pie, and, of course, baseball, and its strange ethics…

The Hartford Yard Goats, the Double-A affiliate of the Rockies, were on the verge of tossing a combined no-hitter (that means more than one pitcher was involved) against the Trenton Thunder, the Double-A Affiliate of the Yankees. Facing a 3-0 loss as well as the ignominy of being no-hit,  the Thunder’s  Matt Lipka broke up the no-hitter with a perfect bunt with one out in the 9th. The next two batters went out quietly, and as the teams began to leave the field, a fight broke out because some of the Yard Goats shouted nasty words at Lipka.

You see, it is an unwritten rule of baseball that bunting late in a game to wreck a no-hitter is unethical and poor sportsmanship. The theory is that a no-hitter is such a great personal and professional achievement that the opposition should respect the effort and not seek to ruin it with a “cheap hit.”

This “rule” has always been badly reasoned at best in the Major Leagues, and makes no sense at all in the context of a Double A, minor league game, and especially this game:

“Lipka has been in the minor leagues for a decade. Making it to the major leagues, even for just a cup of coffee, would be huge for him. Beyond realizing a lifelong dream, Lipka would get better pay (prorated) and benefits, including health insurance. Will that bunt likely be the deciding factor for the Yankees? Probably not. But there’s a non-zero chance it could, which means Lipka takes that bunt hit every day of the week and twice on Sunday — no-hit bid be damned.”

The no-bunt rule has always been weenie-ism, not ethics. This is the United States of America, and our “national pastime” should stand for trying to win right down to the last out, until the last dog dies, and the fat lady sings, hopefully not in a croptop and Daisy Dukes.

42 thoughts on “D-Day 75th Anniversary Ethics Warm-Up, June 6, 2019: Stumbling As We Try To Keep America Worthy Of Their Sacrifice [UPDATED!]”