1. Now THIS violates the Niggardly Principles! Poor, angry, Australian vegan Cilla Carden has filed complaint after complaint with various courts, most recently the State Administrative Tribunal of Western Australia and the state Supreme Court arguing her neighbors cook fish so often on the barbie that she’s been deprived the enjoyment of life.

“All I can smell is fish! I can’t enjoy my backyard, I can’t go out there,” Carden told reporters. Yet her entreaties keep getting thrown out of court, even though she says the neighbors are deliberately trying to nauseate her.

So, naturally, after Carden’s story went viral,someone launched a Facebook page titled Community BBQ for Cilla Carden  promoting an event scheduled for Oct. 19, in which Australian carnivores will descend on  Carden’s neighborhood grilling like there’s no tomorrow.

“Don’t let Cilla destroy a good old Aussie tradition, join us for a community BBQ in protest of her actions, and help Cilla Carden GET SOME PORK ON HER FORK,” the event invitation says. More than 4,500 Aussies have RSVP’d.

2. Of course, many of us knew this from the start. In a video posted to Twitter,  Debra Katz, the lawyer for Christine Blasey Ford says that Kavanaugh “will always have an asterisk next to his name” when he “takes a scalpel” to  Roe v. Wade. This, she says, is “part of what motivated Christine,” and Katz adds,

“I believe that Christine’s testimony brought about more good than the harm misogynist Republicans caused by allowing Kavanaugh on the Court, We were going to have a conservative. Elections have consequences.”

Translation: Blasey-Ford’s objective, enabled by her unthical lawyer, was to smear Kavanaugh to make it easier to impugn his motives when he was part of an entirely hypothetical, opinion overturning Roe in a yet to be filed or accepted case.

I still read ignorant and gratuitous comments on Facebook calling Justice Kavanaugh a  rapist, a sexual predator and a misogynist. I no longer am polite when I respond to these people on Facebook; they are bad citizens and behaving like bad human beings, and I explain exactly why. If my foolish “friends” don’t like it, they can unfriend me. I’ll stick with them until they do, calling them out every time they post such unethical bile. Friends don’t let friends become vicious and stupid without a fight.

3. Fire her. Sue her. Make sure she never gets to abuse another child. Heritage High School (in North Carolina) English teacher Melissa Wilson gave out a “Diversity Inventory”  to her class last week that required students to categorize themselves, their parents, their doctor, friends, and others by race, class, sexuality, religion, and more. Look: 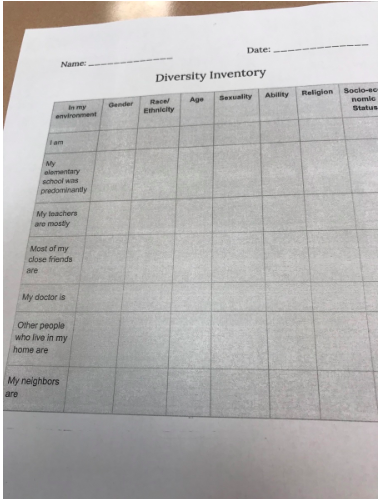 This was the second time Wilson had done this. Students reported that Wilson made them go stand by a sign on the wall that correlated with their sexuality. When the students expressed discomfort, the teacher’s response was reportedly to tell them it was alright because she used to be Catholic and is now a bi-sexual atheist.

Equity work is not a one-off professional development training or an office that works in isolation. This work requires embedded and systemic shifts. Diversity, equity and inclusion must be infused within the very fabric of your organization, school or district. The transportation department needs to be operating with an equity lens just as much as an academic department, and so on. While traditional leadership is top-down, equity leadership looks more like a lattice—everyone from families to support staff to educators all the way to the school board  must be in.

You know, if you ask me what “Make America great again” means, one of the messages is to return to a public education system that copuld be trusted not to indoctrinate children with with ideological edicts like this. [Pointer: Megan Fox]

4. Boy, that President Obama sure did a bang-up job improving race relations in the US, didn’t he? Just a reminder: my position is that Barack Obama sent race relations in this country hurtling backwards, and that this, assuming that the history establishment eventually starts being objective again, will be recognized as his primary legacy as President, a truly terrible and destructive one. The latest example: Jamele Hill, the African American reporter fired by ESPN for repeatedly calling President Donald Trump  a “white supremacist” on social media, has been picked up by The Atlantic as a columnist. Her first entry is “It’s Time for Black Athletes to Leave White Colleges.” an article no white journalist could author, and an example of pure racial hostility.

Jonathan Turley, who gets credit for flagging this (since I would no more read anything by Hill than stick my toes in the disposal), writes,

For those who want greater not less diversity in education, it is a call that not only would deny athletes benefits from these academic and athletic programs but reverse gains from desegregation.

Hill’s race-based rule apparently does not apply to non-athletes. She graduated from Michigan State University which is not only predominantly white (67 percent) but has only seven percent African Americans.

5. And now, a poll. These are all awful, awful people, and I’m just curious: who do you think is the most awful of all? If you can, explain why you voted as you did.