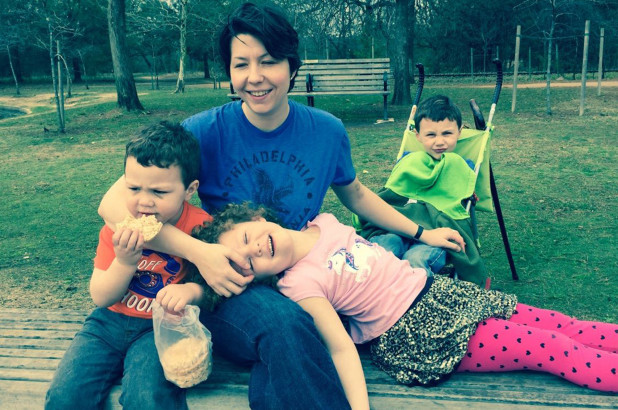 The one thing I can admire in activists, even those whose agendas I find wrong-headed and irresponsible, is integrity. Are they genuinely passionate about what they advocate? Do they really believe the arguments they put forth? Will they adhere to their stated principles even when it becomes profitable or convenient to reject them? I may think an activist is ill-informed, addicted to demagoguery and not very bright (Rep. Octavia-Cortez comes immediately to mind), but I will always, perhaps grudgingly, appreciate his or her passion, dedication, and persistence, if they are accompanied by integrity.

And then we have activists like Ashley Auzenne, 39, a Texas mother who fought for stricter gun control laws and an end to gun violence until last week, when she used a gun to kill herself and her three young children,  Parrish, 11, Eleanor, 9, and Lincoln, 7.

I think it’s fair to call someone who says she wants to  to end violence (Auzenne’s Facebook profile pictures were accompanied with the hashtags #Enough and #EndGunViolence) and then engages in it herself a hypocrite, a liar who publicly pretended to hold one view while personally being capable of engaging in the exact conduct she condemned when it suited her own perceived needs.

Perhaps, on the other hand, we should regard her as the real life equivalent of the villains in various TV shows and movies like 2007’s “Live Free or Die Hard,” the third installment of the Bruce Willis “Die Hard” franchise. In that movie, a tech whiz who had failed in his efforts to persuade the government that crucial systems were vulnerable to hacker attacks sets out to prove his point by becoming a cyber-terrorist who takes control of government and commercial computers across the United States to launch a “fire sale” disabling  the nation’s infrastructure.

Does that kind of conduct qualify as a passion and commitment by an activist? If so, it’s the ultimate utilitarian strategy, intentionally causing death and destruction to focus attention on a greater threat. It also fails multiple ethics tests, notably those of reciprocity and Absolutism. The United States’ values and culture recoils at sacrificing the lives of some to save the many.

All of this gives Ashley Auzenne too much credit, of course. Killing one’s own innocent children to make a vivid public policy point isn’t dedication, it’s madness. In all likelihood, the last thing this activist was thinking about as she decided to start shooting was her anti-gun agenda. She had been battling depression and anxiety in addition to painful physical ailments such as arthritis and lupus, and had just reached the end-stages of an ugly divorce. She snapped.

Maybe, in the abstract, this anti-gun zealot would have argued for “red flag” laws that would make it more difficult for Americans to purchase guns if they suffered from long-term illnesses, had endured stressful like experiences such as a divorce,  becoming unemployed, or losing a loved one, in addition to being treated for emotional or mental illness. Maybe sane Ashley would have pointed to the tragedy of mad Ashley as proof of the rightness of her anti-gun, anti-gun violence mania.

Or maybe she was projecting her own mentality onto others by wanting to make guns unavailable to her fellow citizens. There seems to be a lot of projecting going on these days, with activists (and elected officials) engaging in exactly the conduct they loudly accuse others of being reprehensible for embracing.

In the end, whatever the cause, when a publicly passionate activist does  what she’s been condemning and protesting against it is reasonable to conclude that her cause was not as sincere or thought-out as she pretended it was. Like the anti-gay zealot who is a closeted gay himself, like the anti-drug big city mayor who shares crack with an old girl friend, like the politician who declares that abortion is murder and yet encourages his mistress to have one, the anti-gun mom who shoots her children has conclusively proven that she wasn’t the dedicated activist she was pretending to be.

And that she was crazy, of course.