Sirius XM already has two Christmas stations operating, emulating Hallmark, which is showing nothing but cheesy Christmas movies starring B and C list actors (Candace Cameron Bure is one of the better known ones) all day long. Is there some significance to this rush to get to Christmas? Is it because everyone is so nasty and hostile that there is some kind of collective yearning for peace on earth and good will toward men, womyn and non-binary trans-pan-sexuals to arrive by cultural fiat? My wife is betting that the effort will just make everyone thoroughly sick of Christmas by the time we get there. Elmo learned, in a Sesame Street Christmas Special, that if every day is Christmas, nothing is.

But I digress…The reason I noted this was that I just heard Kelly Clarkson’s “My Grown-Up Christmas List” on the “Holiday Traditions” channel (I deemed it a better bet than The Doors, and “:Please Mister Custer”) and finally listened to the lyrics:

Yeesh. Those are grown-up wishes? They are if “grown up” means ten-years-old.

I. One more ominous example of the Left channeling old fashioned totalitarianism..I knew that San Francisco was erecting a mural dedicated to the Climate Change Bullies’ own  Joan of Arc, creepy Greta Thunberg, but I didn’t realize how huge it was going to be. The conservative satire site the Babylon Bee joked that her eyes would be equipped with lasers to zap SUVs, at least I thought it was a joke. Legal Insurrection writes,

Instead of focusing on issues of sanitation, job creation, or at least ensuring there are more high school students than drug addicts in the city, activists have chosen to honor Swedish “climate crisis” activist Greta Thunberg with a giant mural that will grace the skyline.

The mural is still a work in progress, as Cobre is spending his days hoisted high up on a platform about 10 stories above Mason street, on the side of the Native Sons building near Union Square.

Thunberg is the 16-year old from Sweden who has inspired young people all over the world to take to the streets and let older people know they want climate change to be taken seriously.

“What I want from people is to realize have to do something for the world,” Cobre said. “Otherwise, it’s going to be the beginning of our extinction.” 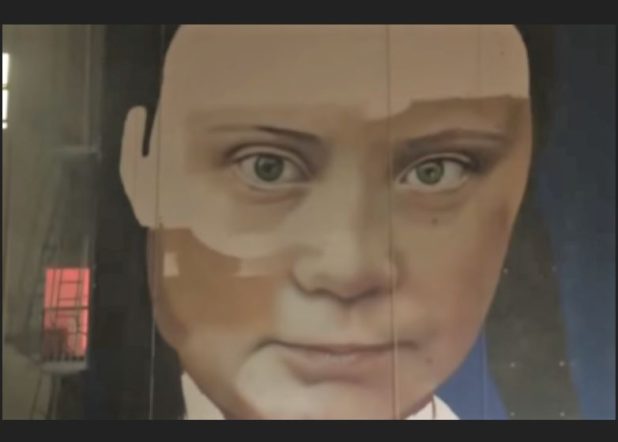 This is Big Brother art. It’s intimidating and oppressive, and intended to be. [Thanks to Cathammer for the pointer.]

2.  “The Return of the Gang That Couldn’t Shoot Straight.” “The Gang That Couldn’t Shoot Straight’ was the title of a comic novel by Jimmy Breslin about an idiotic Mafia family. The famous political and social columnist would have had a great sequel at hand if he had lived long enough to write about the Democratic impeachment wars. Here’s the latest embarrassment, currently reported by The Federalist, the Daily Caller, Fox News, and Pajamas Media, but not by the mainstream, Left-biased media, which will only report news damaging to the cause when it has to:

The whistleblower behind the Democrats’ impeachment inquiry may have violated government regulations by using his office and his access to classified information to enrich himself on GoFundMe, a new complaint alleges. Anthony Gallo, managing partner at the law firm Tully Rinckey PLLC, sent a letter to the Intelligence Community Inspector General (ICIG) passing on the allegations from a source with a top-secret SCI security clearance who has served in government.

The GoFundMe fundraiser, entitled “Help the Intel Community Whistleblowers,” has raised $227,537 as of Tuesday morning. According to the complaint first reported by Fox News, the donations from roughly 6,000 individuals “clearly constitute” gifts to a current intelligence official. This may violate 5 CFR 2635.203 and other government statutes.

“I have not seen anything on this scale,” Gallo told Fox News, referring to the $227,537 raised on GoFundMe. “It’s not about politics for my client — it’s whistleblower-on-whistleblower, and [my client’s] only interest is to see the government ethics rules are being complied with government-wide.”

Earlier this year, the Office of Government Ethics (OGE) warned federal government employees that they “may not accept any gift given because of the employee’s official position,” meaning that the gift would “not have been given had the employee not held the status, authority, or duties associated with the employee’s federal position.” OGE also warned that gifts may not be accepted from “prohibited sources,” such as anyone whom the employee’s agency regulates or anyone who has interests affected by the employee’s work.

Gallo filed this complaint to ICIG Michael Atkinson, the same government watchdog who originally received the Ukraine whistleblower’s complaint that sparked the impeachment inquiry. Atkinson is protecting that whistleblower’s identity, even though various news reports have tentatively identified him as Eric Ciamarella.

“[M]y client believes … that the federal employee you are protecting and their attorneys apparently have strategically weaponized their alleged whistleblowing activities into a very lucrative money-making enterprise using a charity incorporated under a different name than the trade name it is using for fund-raising purposes, which would appear to my client to be a clear abuse of the federal employee’s authority and access to classified information,” Gallo wrote in the letter to Atkinson.

Something as shattering to a nation as an impeachment has to be handled with unimpeachable fairness and without obvious conflicts. The Mueller investigation was sullied even before its report saw the light of day, and Plan S is well down the same incompetent path.

3. And while we’re on the topic, can someone please issue an official directive regarding how to spell the whistleblower’s damn name? I just corrected all of my references to “Ciaramella” and just read two articles that spelled it “Ciamarella.”  I think I’ll just refer to the guy as “Eric.”

4. This is too stupid for a full post, but…what the hell is the matter with the Governor of Wisconsin? Huffington Post tell us,

In 2011, during his first year as governor, [Gov. Scott] Walker reversed a quarter-century tradition when he changed the name from “holiday tree” to “Christmas tree,” The Associated Press reported. [Gov. Tony Evers (D)] not only changed it back, but he also gave it a science theme, asking kids around the state to submit ornaments on the subject. “We want students to make holiday ornaments that celebrate what science means to them, their families and their communities,” said Evers, a former science teacher, per WSAU radio.

Then the article devolves into a “Republicans pounce” screed. ONE, it’s a Christmas tree. Christmas is the holiday it celebrates. TWO, I know “science” is a secular religion, but the government should not be dictating the message children can express with their ornaments. Will ornaments expressing support for “no more lives torn apart, that wars would never start, that time would heal all hearts, that everyone would have a friend, that right would always win and that  love would never end” be rejected? I guess so. Will Evers have a giant, laser-eyed Greta head on the top of the tree in place of the star?