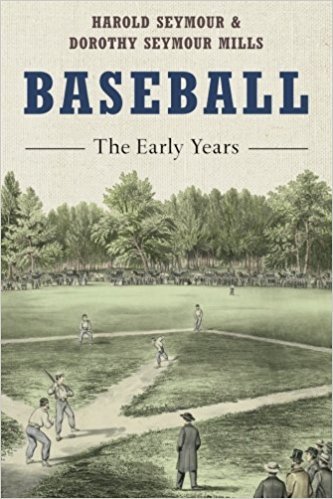 There was an upsetting ethics story in the obituaries last week. It told the tale of the rank injustice perpetrated by a famous and much-honored researcher, historian and author on his collaborator, from whom he withheld  credit and recognition—because she was his wife.

Dorothy Seymour Mills collaborated for more than 30 years on a landmark three-volume history of baseball with her first husband, Harold Seymour. Their work, originally attributed only to him,  is regarded as the first significant scholarly account of baseball’s past.  (“No one may call himself a student of baseball history without having read these indispensable works.” John Thorn in 2010, then Major League Baseball’s official historian.)

“Baseball: The Early Years” (1960), “Baseball: The Golden Age” (1971) and “Baseball: The People’s Game” (1990) all were completed with substantial and indispensable contributions by Dorothy, who, unlike her husband, was not a baseball fan. (“You write a lot more objectively about a subject you’re not in love with,” she once observed.) She was the primary researcher, organized the projects, typed the manuscripts, prepared the indexes (ugh) and edited each book before it went to the publisher. Because of her husband’s failing health, she wrote a substantial portion of “Baseball: The People’s Game.” Yet her husband adamantly refused to give her an author’s credit. Each book bore only Harold Seymour’s name, and hers was relegated to the acknowledgments.  The first book in the trilogy, “Baseball: The Early Years,” received rave reviews.  Sports Illustrated compared Seymour to Edward Gibbon, the iconic historian who wrote “The History of the Decline and Fall of the Roman Empire.” Dorothy was invisible, and her husband wanted it that way.

Finally, as the last book was nearing completion, Seymour’s abused collaborator and wife made a formal appeal for recognition. This time, in addition to her usual contributions, she had written the last third of the book, a full 13 chapters. In her 12-point written demand to finally receive the cover billing she deserved, she wrote, in part: “I sifted, analyzed, and organized all the research, putting it into a form that would make it intelligible and from which the writing could be done. I produced hundreds of pages of outlines interpreting as well as quoting from the research….Without this analytical study, the writing would have been impossible.”

Her husband as always refused.

Dorothy Seymour said in subsequent interviews that she tolerated this outrageous treatment because of “the times”. “Everyone assumed that he had done all that work by himself — that’s what he wanted them to assume, but we were equal partners,” she said in 2010. “He just couldn’t share credit. I didn’t say anything at the time, because at the time, wives just didn’t do that.”

Oh, I guarantee that some wives did “that.” Especially after the first book, there was no good reason for Dorothy not to sell her husband that either she received full credit for her indefensible work, or he could find someone else, if he could. She was not without leverage. She was horribly betrayed and mistreated, but if credit mattered to her, she was not without means of obtaining it. Other women would have benefited if she had forced the issue. (And now I’m wondering if I properly credited my mother for typing my thesis…)

To be sure, Dorothy Seymour’s plight was hardly unique. John Fuegi, an American scholar, claimed that Bertolt Brecht’s wives and mistresses were  co-authors of acclaimed works like “The Threepenny Opera” and “The Caucasian Chalk Circle.” Historian Will Durant took sole credit for first six books of his 11-book series, “The Story of Civilization,” though his wife Ariel was a substantial contributor. He began to hive her co-author credit  starting with volume #7. Sophia Tolstoy  published his books and  copied out “War and Peace” seven times by hand,  including multiple revisions. Vladimir Nabokov’s wife, Vera, was his typist, editor and literary agent, and often forced him to rewrite passages that didn’t meet her standards.

In a other fields, Albert Einstein’s first wife Mileva (she was also a physicist)  is believed  to have made major, uncredited contributions to her husband’s work. Architect Denise Scott Brown was ignored when her husband Robert Venturi received the 1991 Pritzker Architecture Prize  based on work they had done jointly.  As finally publicized widely in the film “Big Eyes,” Margaret Keane painted the pictures of the iconic “big-eyed children,” but her husband Walter accepted all the credit for her work until she took him to court for damages and  recognition as the real artist.

Zelda Fitzgerald accused F. Scott of stealing her words she read  This Side of Paradise:

I recognize a portion of an old diary of mine which mysteriously disappeared shortly after my marriage, and also scraps of letters which, though considerably edited, sound to me vaguely familiar. In fact, Mr. Fitzgerald—I believe that is how he spells his name—seems to believe that plagiarism begins at home.

It  took two decades after Harold Seymour’s death in 1992 for justice to prevail, but, happily, it did.

Dorothy began to discuss her contributions to his work publicly and to write about it.

In 2010, the Society for American Baseball Research (SABR) announced that Harold Seymour would be among those receiving the new Henry Chadwick Award, recognizing significant achievements in  baseball researcher. Again, Dorothy was going to be snubbed, and this was after she had documented her role in making the Seymour books possible.  SABR’s female members objected strenuously,and the selection committee reversed itself, adding Dorothy to the list of awardees.Then the Oxford Press announced that future printings of the “Baseball” trilogy would bear Dorothy Seymour’s name, and above that of her late husband’s name on the cover of “The People’s Game.”

Dorothy Mills remarried, and began a successful career as a historical novelist. She also authored  a book of vegetarian recipes; a series of mysteries set inside an assisted living facility like the one where she lived, and “Chasing Baseball: Our Obsession With Its History, Numbers, People and Places.”