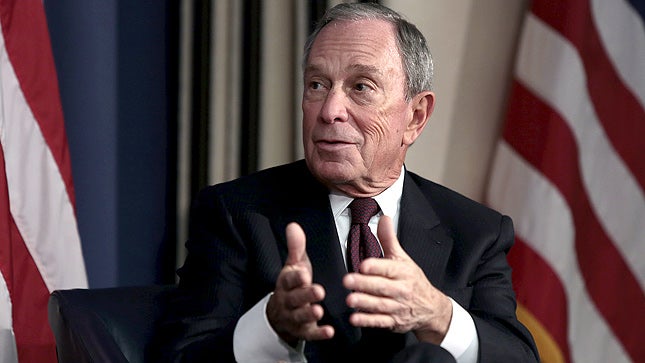 The first time Joe Biden ran for President, back when he could still think more or less clearly, his campaign was derailed by the revelation that his stump speech was substantially plagiarized. Now the Intercept has determined that

“Mike Bloomberg’s presidential campaign plagiarized portions of its plans for maternal health, LGBTQ equality, the economy, tax policy, infrastructure, and mental health from research publications, media outlets, and a number of nonprofit, educational, and policy groups. The Intercept found that exact passages from at least eight Bloomberg plans or accompanying fact sheets were direct copies of material from media outlets including CNN, Time, and CBS, a research center at the John Jay College of Criminal Justice, the American Medical Association, Everytown for Gun Safety, Building America’s Future Educational Fund, and other organizations. …The plagiarized sections ranged in length from entire paragraphs to individual sentences and fragments in documents that were between five and 174 pages long.

…On Wednesday afternoon, The Intercept sent a detailed query to the Bloomberg campaign. By Thursday morning, one of the plans was completely taken down, while others were changed. The campaign reposted the plan that had been removed on Thursday evening, after this story was published.

If you can make any sense out of the campaign’s “explanation” at the link, please enlighten me. For all the tap-dancing around it, when you publish text as your own and it originated elsewhere, that’s plagiarism.

Bloomberg’s own media entity, Bloomberg News, takes a hard line against plagiarism in its style guide, “The Bloomberg Way.” “Plagiarism—the unattributed copying of others’ work—is inexcusable,” the style guide, which was updated in 2017, reads. “Plagiarism is theft. Be prepared to lose your job if you plagiarize. Always credit original reporting to those who did the legwork, and never reproduce quotes made to others if we heard them ourselves. Press summaries must cite the publication that did the reporting and explain the attribution used in the original story.”

So this is the candidate who is going to rescue Democrats from the Hobson’s choice between Slow Joe, Comrade Bernie, Fauxahontas and Doogie Howser? The best Bloonberg can do is to make whoever the Democrats have to nominate look good by comparison.

Let’s see how much publicity this story gets from the mainstream media.

14 thoughts on “All Those Billions To Spend Bashing Trump, And He Can’t Even Develop His Own Policy Statements?”