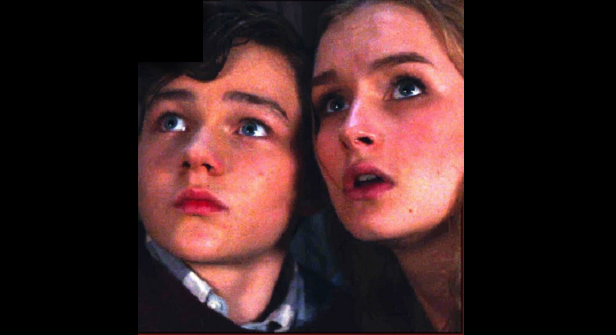 1. It’s come to this…Commenter Matthew B sent me the link to an article on Facebook, and when I clicked on, it this came up… 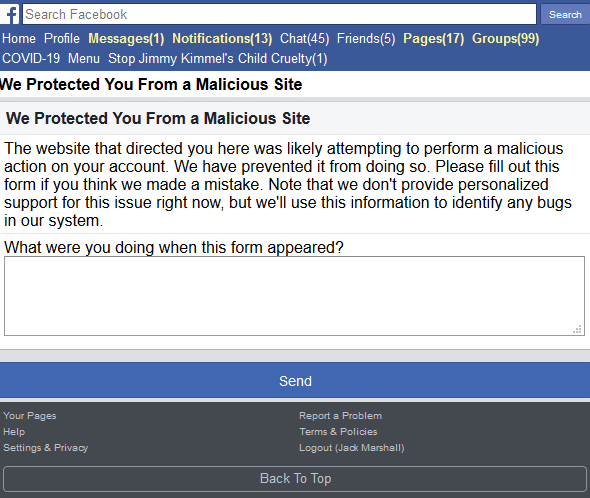 Yes, Facebook warned me that Ethics Alarms was a “malicious site.” I especially like the part where Facebook says to contact them if I think they were in error, but also say that they won’t do anything if it is.

2. Meanwhile, regarding my  alma mater whose diploma I already have turned to the wall, here is an illustration in the latest Harvard alumni magazine for an article about how bad home schooling is:

I bet Harvard Magazine tries to claim that this was intentional by the artist, to highlight the inadequacy of a home schooling education. That will be, of course, a lie, but there won’t be any way to prove it. You know, when you are America’s oldest and most prestigious university, you really can’t afford to be that careless, especially to your alums, and particularly when your administration has embarrassed itself repeatedly on the last decade.

This is also a clear case of “bias makes you stupid.” Why is the home schooled kid locked in the house? I’d guess that home-schooled children get at least as much outdoor recreation as traditionally educated children: I know our son did. And the canard that homeschooling prevents children from socializing is disinformation.

3. Facebook friend-banning ethics…A long-time friend, actor-lawyer and super-mensch posted this on Facebook today, and I asked his consent to include it here:

Okay… that’s one. I have unfriended one person who objected to my insistence of civility on my wall. On the positive side, he did it in a PM, which is fine. Also on the positive side, I did not mind his disagreement with me. His wall is full of spirited debate that often veers into personal insult, which is fine by me, it just doesn’t encourage civility and society, in my opinion. What was unforgivable was that he took a superior air to me playing by my rules on my Wall, stating that I was naive, and he then insulted a mutual friend. A friend who I respect highly in many areas of life, even if we disagree sharply on many political issues. He then told me to “have a good life.” Fine: I take that as a kiss-off. I’m not going to be passive/aggressive and give the bullshit about “if you disagree, then please unfriend me.” No, with that wave of disdain coming at me, I will actively unfriend a person and take full responsibility for it. And if I reach the point of unfriending someone on facebook, i have also reached that point in the real world.
At the risk of beating a dead horse, the breakdown of civilization and society begins when we insult each other so much that we begin to believe any disagreement is hatred and return it in full. Then reactions are purely emotional, and not rational, and we dehumanize the “enemy” and begin to justify any actions taken against that enemy. Discussions are simply talking past each other, no one listening, only trying to win; to crush. And then we have lost whatever security we have, as well as our civilization. That might happen anyway, but I will have no part in furthering such destruction. If that makes me naive, so be it.

4. Unethical website watch. Yesterday, while ruing  the cultural and educational rot that led so many progressives to assume  a school  can withhold diplomas from seniors on the basis of a racist video made and shared off campus, I quoted some comments from the site blog of the left-loving website Boing Boing,  which calls itself “A Directory of Wonderful Things.” It does have some wonderful things, but the Bill of Rights understanding of the reasonably well-informed 12-year-old is not among them.
Someone linked to my post, and as reported by Ethics Alarms commenters who had the intestinal fortitude to drop in, the resulting responses were even more legally illiterate than the ones I quoted. Such as…

The blog moderator then took down the clarifying comments of the Ethics Alarms visitors, because “the community feels it is offensive, abusive, or a violation of our community guidelines.” It is a breach of blogging ethics when accurate and essential information is removed because “the community” is fond of it’s misconception.

5. And this, Bernie Sanders, is why most Americans don’t like unions. From the New York Times (which does like unions):

An effort to raise money for entertainment workers hurt by the coronavirus pandemic has collapsed…The charity, Broadway Cares/Equity Fights AIDS, had planned an online fund-raiser [last week] at which it would stream a concert, recorded in November, that celebrated the 25th anniversary of Disney on Broadway. The concert, backed by 15 musicians, was also a fund-raiser, which brought in $570,426 for Broadway Cares.

Two major labor unions, Actors’ Equity Association and SAG-AFTRA, agreed to allow the streaming of the concert without fees, but the American Federation of Musicians, which has been focused on winning greater compensation for streamed content, did not.

“Members of the American Federation of Musicians are suffering from the sudden cancellation of all work as a result of the Coronavirus outbreak,” the union’s international president, Ray Hair, said by email. “During the height of this crisis, Disney Theatrical has come to us asking to stream media content without payment to the musicians involved in the production. Especially now, with zero employment in the entertainment sector, the content producers should care enough about the welfare of those who originally performed the show to see to it that they are fairly compensated when their work is recorded and streamed throughout the world.”

The 15 musicians who played at the concert had already been paid for their services.

“I understand being told no,” Tom Viola, the organization’s executive director, said in a statement. “When that happens — and it does — I can usually see why or understand the extenuating circumstances. It never feels simply meanspirited. This was different and the result, particularly now, is heartbreaking.”

Disney, which has raised nearly $20 million for Broadway Cares over the last quarter-century, was similarly unhappy. “Disney wholeheartedly supported the request from Broadway Cares/Equity Fights AIDS to AFM to waive fees for this fund-raiser, just as many unions and guilds had happily agreed to do,” Disney Theatrical Productions said in a statement. “It’s disappointing that in this case, due to AFM’s decision, much-needed funds will not be raised. We are fiercely proud to be advocates for Broadway Cares and will continue to be, especially at a time like this.”

Embarrassingly, the musicians who played at the live concert announced that they did not agree with their union’s position, and had not been consulted about it. They said they wanted the union to stop blocking to allow the streaming of the concert.

“We as an orchestra are happy to forgo any payment for the streaming of this charitable event,” they said. “Now more than ever it is essential to join with the other members of the arts community to help those in need.”