1. Gaslighting! Seth Abramson is an American professor, attorney, author, and political columnist whom I have been mercifully unaware of previously. In response to last night’s inspiring speech by the President (inspiring unless you’re in favor of gutting U.S. culture and rights), he tweeted, 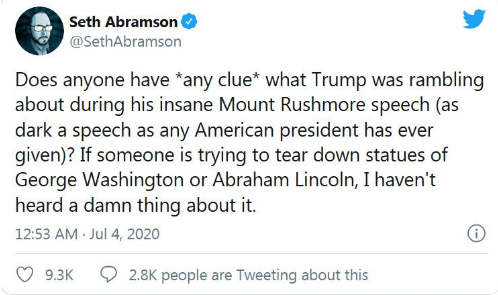 Someone please explain to Seth that if you don’t pay better attention than that to what’s going on, you are ethically obligated to shut the hell up.

2. I have to mention this because it’s embarrasses Harvard. Claira Janover, who graduated in May from the once-respectable university with a degree in government and psychology, saw a  short clip she posted on Tik Tok where she threatened to stab anyone who had  “the nerve, the sheer entitled caucasity to say ‘all lives matter'” go viral.

“I’ma stab you,” the Connecticut native says on the clip, zooming in close on her face. “I’ma stab you, and while you’re struggling and bleeding out, I’ma show you my paper cut and say, ‘My cut matters too,’” she added.

Oh, I get it! She’s making an analogy between someone saying “All Lives Matter” as a retort to “Black Lives Matter,” saying killing non-black people isn’t an issue because black people being killed is to white people being killed  like a stabbing is to a paper cut! Or something like that. It’s not a very good analogy. No, it wasn’t a “a true threat,” either. It was just an ugly and obnoxious video that signaled that she is irresponsible and intolerant of other points of view. This impugned the judgment of her new employers, the international accounting and consulting firm Deloitte, and they canned her. Of course they did. She should have known that would happen.

I would have fired her just for saying “Ima stab you.” Corporations don’t tend to pay huge fees to people who say, “Ima” anything.

Rather than being accountable, Janover has decided to play the victim, claiming Trump supporters are at fault for her fate, and attacking her ex-employer.

“I’m sorry, Deloitte, that you can’t see, ” she said, “that you were cowardice [sic] enough to fight somebody who’s going to make an indelible change in the world and is going to have an impact.” If she keeps this up, she may successfully ensure that nobody hires her, and though she will no doubt claim otherwise, it will have nothing to do with racism.

3. Yes, that speech is OUT OF DATE! The number or quotes and links being circulated of and to Frederick Douglas’s July Fifth oration in 1852, “The Hypocrisy of American Slavery” (“What, to the American slave, is your 4th of July? I answer; a day that reveals to him, more than all other days in the year, the gross injustice and cruelty to which he is the constant victim…”) this past week is another example of madness. Millard Fillmore was President. The controversy over slavery was just beginning to speed up: that was the year, a few months before Douglass’s speech, that “Uncle Tom’s Cabin” was published and educated millions of Americans about what slavery was. In 1852, an ex-Congressman named Abe Lincoln was still talking about avoiding “both extremes” on the slavery issue. The Emancipation Proclamation wasn’t a twinkle in his eye. The 13th Amendment was unimaginable; the 1964 Civil Rights Act was the equivalent of science fiction. Nobody thought that a Civil War was on the horizon within eight short years.

In short, Frederick Douglas’s speech condemned circumstances that no longer exist, and it has no relevance today except as evidence of how far the United States has come. Those who continue to claim 2020 that nothing has really changed are lying, or unmoored to reality.

4. Here are four better speeches to reflect upon  on Independence Day:

“About the Declaration there is a finality that is exceedingly restful. It is often asserted that the world has made a great deal of progress since 1776, that we have had new thoughts and new experiences which have given us a great advance over the people of that day, and that we may therefore very well discard their conclusions for something more modern. But that reasoning can not be applied to this great charter. If all men are created equal, that is final. If they are endowed with inalienable rights, that is final. If governments derive their just powers from the consent of the governed, that is final. No advance, no progress can be made beyond these propositions. If anyone wishes to deny their truth or their soundness, the only direction in which he can proceed historically is not forward, but backward toward the time when there was no equality, no rights of the individual, no rule of the people. Those who wish to proceed in that direction can not lay claim to progress. They are reactionary. Their ideas are not more modern, but more ancient, than those of the Revolutionary fathers….

Under a system of popular government there will always be those who will seek for political preferment by clamoring for reform. While there is very little of this which is not sincere, there is a large portion that is not well informed. In my opinion very little of just criticism can attach to the theories and principles of our institutions. There is far more danger of harm than there is hope of good in any radical changes. We do need a better understanding and comprehension of them and a better knowledge of the foundations of government in general.

5. We can hope that this we’ll be able to look back on all of this as temporary insanity, and not as a defense for murdering democracy, liberty, and free speech.

Since the BLM mob is demanding it, the teams are terrified of being metaphorically guillotined as racists. As a direct result, we will now see every reference to Native Americans in marketing, entertainment, sports and popular culture vanish.

He’s a coward too. When executives and others allow malign individuals to successfully weaponize ancient opinions, jokes or statements, they undermine  freedom of thought and expression while empowering bullies and censors.

And on those depressing notes, 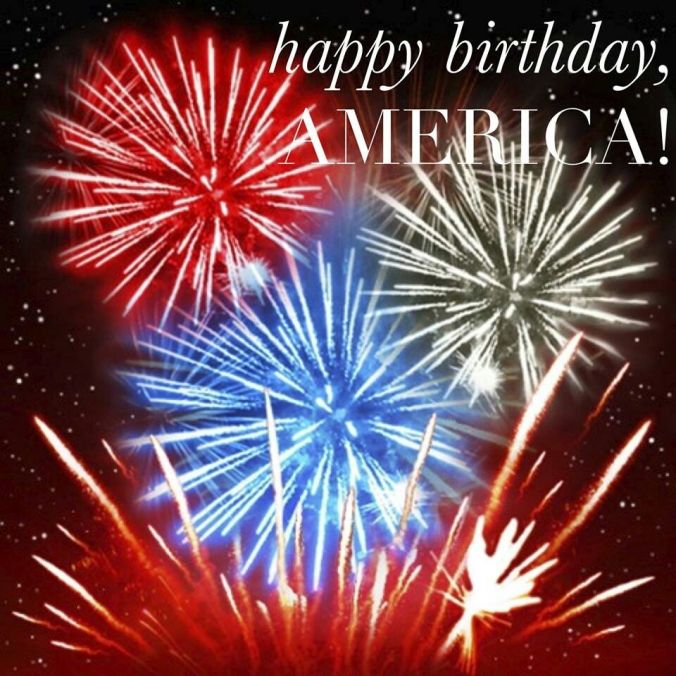