I usually skip the New York Times Sunday Review section now. By mid-2017, it had become so partisan and such a nest of rabid Trump Derangement that it was not unusual for 75% of the content to consist of anti-Trump screeds. I finally got bored with it; the stuff was predictable and too often completely bats. If I read it at all, I did so to check how fanatically the Times was supporting the various coup efforts.

Charlie Warzel is one of the less hateful of the Times op-ed writers, though based on his Ethics Alarms file he is also one of most juvenile. He was the author of a New York Times editorial  titled “Open States, Lots of Guns. America Is Paying a Heavy Price for Freedom,” or in my print edition, “Will We Get Used To The Dying?” that I had fun shredding—it wasn’t hard—here. I was curious to see if he’s gotten any better since May in his Wuhan virus hysteria. His title seemed promising:  “How to Actually Talk to Anti-Maskers: You cannot force public trust; you have to earn it.”

I think “anti-maskers” are jerks. It is still unclear to me how much good masks do, and the information from the “experts” has been inconsistent. I still see no reason to wear the things outside when nobody is going to come within ten feet of you, and I don’t. However, the ethical reasons to wear them are still valid:

I also regard fanatic pro-mask hysterics as ridiculous and will say so when pressed.

However, I was interested to see if Charlie, having gotten himself on the Ethics Alarms Naughty List with his previous screed about the pandemic, would redeem himself. For writing op-eds is all about trust too: if I know you shade the facts, omit relevant information, engage in bias and cheat in your logic, I really don’t care what your opinion is. It’s not worth reading.

Charlie begins with an anecdote about how health officials gained the trust of the public in Senegal during an Ebola outbreak. OK—as long as the idea is to make a point about trust. Ebola isn’t the Wuhan virus, and the United States’ culture isn’t remotely like Senegal’s. Then he writes,

Taiwan is welcoming baseball fans back into stadiums. As of June, more than 20 other countries have begun the process of bringing children back to school. Thailand, a country of 70 million, hasn’t had an instance of local coronavirus transmission in seven weeks, as of last Thursday. And yet Americans are staring down nearly 150,000 virus deaths while governors and health officials pleading with citizens to wear masks are starting to sound like substitute teachers who’ve lost control of the classroom.

One indicator of how bad things are: Last week, Anthony Fauci, the United States’ leading infectious-disease doctor, felt compelled to reassure his audience during an online talk, “You can trust respected medical authorities.” He added, “I believe I’m one of them, so I think you can trust me.”

Ah! So Charlie trusts Dr. Fauci on the topic of masks., and thinks we should to. And my immediate reaction to this is.. 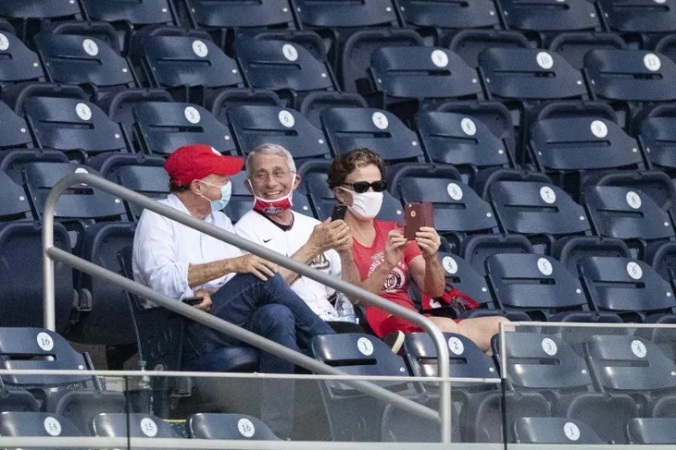 Werzel simply ignores that photo. He could not have been unaware of it, and it is central to his piece. If they are going to be trusted, health officials have to behave as if they believe their own advice. Because the article not only doesn’t mention this, but uses a prominent offender as an example of an expert who is trustworthy, I already think the author is trying to con me, or, worse, doesn’t know what he’s talking about.

This is Strike One

The next section is good:

Given that this is a novel coronavirus, we’re learning on the fly — things that are true one day might need to be revised the next. Dr. Dhillon suggests that in their desire to be authoritative, public health experts have eroded trust by not accurately communicating uncertainty and by being stubborn about correcting the record when our understanding evolved. He described the strategy as a light switch that toggles on and off only when scientific consensus reaches a certain threshold. What’s needed, though, is something akin to a dimmer.

“When we do flip the switch, we rarely admit that we are pulling a 180,” he said. “We don’t apologize” (for instance, for the W.H.O.’s original assurances that masks were not needed). “Instead, we cast judgments and say, ‘OK, you’re not wearing a mask now and you are irresponsible and a bad person.’ That destroys credibility, creates confusion, and it alienates people.”

However, what Charlie doesn’t point out is that if “experts” keep flip-flopping,  we may believe they are doing the best they can, but there is no way we can, or should trust that they are right. Right before that, Wurzel writes,

Polls suggest that most Americans do still have faith in scientific expertise. A June New York Times/Siena College survey showed that “84 percent of voters said they trusted medical scientists to provide reliable information about the virus.” That includes 90 percent of Democrats and 75 percent of Republicans.

I don’t believe that poll for a second. The public can’t be that stupid, yet Charlie acts as if those results are a good thing. The scientists’ information has NOT been reliable. In the area of health, scientists have been getting things wrong forever, as nicely spoofed by Woody Allen in “Sleeper,” when he played a 20th Century health food afficianado who was cryogenically frozen and woke up centuries later…

Coffee is bad, coffee is good; liquor is poison, liquor is good in moderation. A sugar level that was considered OK 20 years ago is diabetes today. Scientists pulled artificial sweeteners off the market in a panic over cancer: they were safe. They pulled DDT over environmental concerns, and millions died. Skepticism about science is wise. The push to have us blindly accept whatever scientists are advocating at the moment is a political strategy aimed at creating climate change panic.

Strike Two in Wurzel’s trust at bat comes with this…

Other experts suggest that government failures run much deeper than communication problems. “It’s not a lack of trust. It’s a legitimacy crisis,” Rhea Boyd, a pediatrician who teaches classes on structural inequality and health at Stanford, told me. “There’s been an active movement from the far right to render major scientific institutions and practices illegitimate. I’m worried less about messaging and more about a failed government response.” Dr. Boyd cited the Trump administration’s attempts to cut the budget of the Centers for Disease Control and Prevention, its ouster of the National Security Council’s top pandemic response official, Mr. Trump’s downplaying of Covid-19 and his downright lies about it (most recently on display during a Sunday Fox News interview in which the president said that the United States had “one of the lowest mortality rates in the world” from the virus) and the White House’s muzzling of the C.D.C.

Virtually all of these—from a pediatrician, not an epidemiologist—are covered in the two articles by Matt Margolis I discussed yesterday. Coincidence? No, these are Democratic talking points. Charlie couldn’t get through his op-ed without a cheap shot at the President. As for the Trump’s much-maligned statement to “Fox News Sunday” host Chris Wallace, “I heard we have one of the lowest, maybe the lowest, mortality rate anywhere in the world,” the key words are “I heard” and “maybe,” especially the latter. We’ll know when all the facts are in. Many nations, like China and Russia, cannot be trusted regarding their statistics. Hospitals and other agencies in the U.S. have been  calling the death of any individual who had the virus a Wuhan virus fatality even if he or she was 103 and riddled with cancer.

In a series of interviews with various health care professionals, who of course blame everyone but themselves for the public’s waning trust, Wurzel writes,

Mark Navin, an expert in the ethics of public health at Oakland University, said we need to dismiss the notion that what we’re facing is new. “There’s this idea that people always used to trust science and that there was total solidarity around public health advice,” he said. “But it strikes me as nostalgic and revisionist.”

I reached out to Dr. Navin because a quote of his has been echoing in my head since I read it in early May. “Every generation has to come and decide if they’re going to trust the government, and if they’re going to trust medicine,” Dr. Navin told BuzzFeed News. “And we’ve taken it for granted in the post-World War II era that people have this, but every generation has to come in and cultivate it.”

Want to guess what Wurzel never mentions in his article, here or anywhere else? The mid-pandemic demonstrations, riots and mobs that scientists and public health specialists endorsed and cheered on.  Strike Three.* He doesn’t mention it, because it renders his op-ed dishonest and nonsensical. You can’t convince an “anti-masker” to wear a mask by arguing that they should trust public health experts.

Because, as Charlie proves unwittingly, they can’t.

* There is also a Strike Four in the piece—see if you can find it—but three is all it takes.

8 thoughts on “Nice Try, Charley…But You Still Struck Out”