Someone at the IRS finally leaked the President’s taxe returns to the Times. That’s a crime, just as it would be if someone leaked my taxes or yours. Of course, this was inevitable, filled as the government bureacracy is with unethical employees who feel it is their duty to try to undermine their ultimate supervisor. Those who cheer on this per se wrongful conduct are enabers and rationalizers.

1. In “An Editor’s Note on the Trump Tax Investigation,” the Times felt it necessary to remind readers, “Some will raise questions about publishing the president’s personal tax information. But the Supreme Court has repeatedly ruled that the First Amendment allows the press to publish newsworthy information that was legally obtained by reporters even when those in power fight to keep it hidden. That powerful principle of the First Amendment applies here.” That’s right, the news media has a right to encourage others to break the law and to publish the results. It’s still unethical, except in the rare circumstances where the public interest is indisputably served by furthering an illegal act, as with (arguably) the Pentagon Papers. Publishing documents protected by law that show no wrongdoing only to encourage partisan attacks in an election year is not such a situation.

The Times can’t be punished, but whoever leaked the documents can, and should.

2. I guess this is the time to post this tweet by CNN’s Brain Stelter, which proves his stunning ethical deficits as well as anything he has ever said on CNN. He was responding to another tweet pointing out that leaking tax returns is a crime, as I just did.

Oh! So if Stelter knows he has received embezzled funds from a bank employee, Stelter can spend the cash on a hairpiece because the thieving employee had legal access to the cash!

3. The President termed the “bombshell” “fake news,” as well he should have. The Times headline calls the tax returns “long concealed,” which is misrepresentation—they weren’t any more “concealed” than my taxes are. The people authorized to see them, saw them. The President wasn’t “hiding” his taxes, just as T. Boone Pickens didn’t hide his taxes. That both chose not to release them publicly to prevent exactly the kind of cheap, low-information voter-aimed negative spin we are seeing now was completely reasonable and ethical.

4. I have wondered if the President’s tax battles with the media and Democrats were a trap; that he knew the documents would eventually come out, and that when they did, what his foes always assumed would be there, and indeed what they were obviously looking for, wouldn’t. That, of course, is any indication of illicit contact with the Russians. There’s nothing there. All the efforts now to see something sinister in the returns is desperate face-saving.

5. Senator Cory Booker tweeted,  “First, we must vote this man out of office. Then, we must change a tax system so deeply flawed that he could get away with all of this.” Brava for Ann Althouse, who deftly puts Booker and similarly inclined Democrats in their proper place, as she wrote:

It’s unAmerican to use the phrase “get away with” to refer to following the law. It’s like accusing me of speeding when I’m going 75 in a 75 mph zone. I’m not “getting away with” it. I’m going the speed limit! Change the speed limit if that’s the wrong top speed. Crimes are the things that have been defined as crimes. It’s particularly irksome for a legislator to talk like that — shifting the blame for the legislature’s own failures.”

“Why didn’t Joe Biden work on changing the tax laws in all those decades in Congress? He’s responsible for the system that Trump, as a private citizen, was forced to operate within. “ 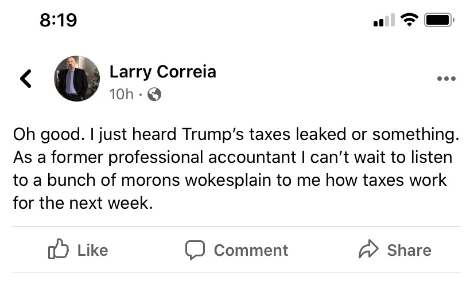 He used this as his introduction to a hilarious and spot-on post today he calls, “No, You Idiots. That’s Not How Taxes Work. – An Accountant’s Guide To Why You Are a Gullible Moron.”

First off, “morality” doesn’t have jack shit to do with taxation. You pay what you legally owe. Nobody willingly pays the government more than they legally owe.

Every single person who barks about how somebody else should be paying more? They themselves are paying the minimum they can get away with. As they should. As should you.

I remember when I was taking my first tax class back in college. This class was all accounting majors by this point. At the beginning of the semester the professor (who’d had a long career as a tax guy) gave us an imaginary family as our clients and had us do their taxes. One kid didn’t take advantage of all the obvious deductions for his clients. When the professor asked why, the kid said some mushy thing about how he didn’t think it was FAIR to keep that money from the government… Holy shit. The professor ripped this kid a new asshole. HOW DARE YOU!?! IT IS NOT THE GOVERNMENT’S MONEY! IT IS YOUR CLIENT’S MONEY. YOU OWE THEM YOUR BEST! IT IS YOUR SACRED DUTY TO SAVE THEIR MONEY! YOU DISGUST ME AND YOU SHOULD NEVER BE A CPA!

That class was one of my favorites.

Basically, you pay what you owe, no more, and anyone who claims otherwise is full of shit.

37 thoughts on “Observations On The Trump Tax Returns Dud”