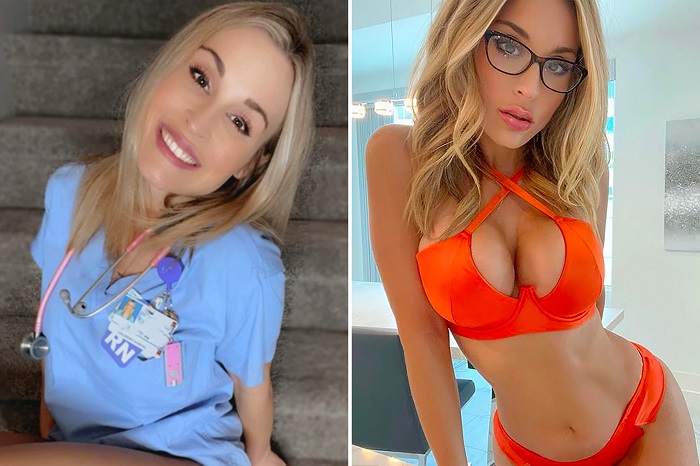 There is a Naked Teacher Principle, however. The Principle states that a secondary school teacher or administrator (or other role model for children) who allows pictures of himself or herself to be widely publicized, as on the web, showing the teacher naked or engaging in sexually provocative poses, cannot complain when he or she is dismissed by the school as a result. The Naked Teacher Principle and all of its variations have been explored exhaustively on Ethics Alarms, The last time it was discussed, nearly a year ago, was in the context of rebutting the argument that there are similar principles regarding police and firefighters.

The current controversy is similar. Allie Rae, shown above, was a competent and dedicated Boston-area ICU nurse (and a 37-year-old mother of three) until she was was forced out of her medical job after employers discovered her non-traditional sideline, an OnlyFans page with a current following of more than 69,000. She says she started being sexually provocative on the web to relieve pandemic lockdown stress as well as her reaction to being on the hospital’s front lines during the Wuhan peak, sometimes working 14-hour shifts. Actually, maybe nursing was the sideline. After all, Allie says she made over $8,000 in her first month on OnlyFans, and she was making only seven a month as a nurse.

She made every effort to keep her double life from interfering with nursing duties, not using her real name and never revealing her workplace. But as is almost always the case, some colleagues stumbled on to her photos, and they decided to send screen shots to hospital management. Management, in turn, gave Allie an ultimatum to quit the sexy OnlyFans gig or be fired. “I was a very respected nurse on my unit; I actually trained all our incoming nurses,” Rae said. Nonetheless, her bosses treated a completely irrelevant outside activity that could not logically relate to her professional effectiveness, competence or trustworthiness as a reason to jettison a valuable employee. She decided to go full-time web pin-up.

There is no analogy to the “naked teachers” episodes. Nurses are not role models to their patients, who don’t, or shouldn’t, care what the professionals who keep them alive do in their spare time. Nor are most of their patients children. Allie Rae described what “about six” of her colleagues did to undermine her as a nurse as “very Mean Girls.” That’s sounds about right.

Since going public, she says, “countless nurses” and other health care workers have reached out to her to express support. Some have even inquired how to start their own pages.

42 thoughts on “No Naked Nurse Principle”