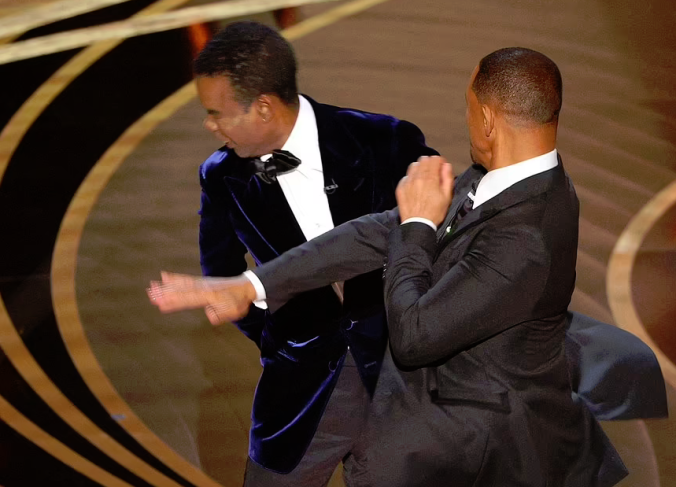 First he slapped Chris Rock in full view of America and the world, tainting a once-iconic tradition that was already shaky. Then he returned to his seat in the theater, as if nothing had happened, and shouted an obscenity at his victim. After being allowed to remain at the scene of the crime (and massive exposure of his broken ethics alarms) though he had been asked to leave and refused, Will Smith triumphantly accepted the Oscar for Best Actor, using his speech to rationalize his conduct, never coming close to a genuine apology.

Then he partied the night away like any other self-obsessed Hollywood celebrity.

Last night, after issuing a pro forma Instagram “apology” that was wretched by any standard (It was a #6 at best and a #10 at worst on the Ethics Alarms Apology Scale), Smith took a third metaphorical swing at the contrition ball he had missed twice, and at least made contact.

He announced that he was resigning from the Academy of Motion Picture Arts and Sciences, which hands out the Oscars, in the course of this statement:

“I have directly responded to the Academy’s disciplinary hearing notice, and I will fully accept any and all consequences for my conduct. My actions at the 94th Academy Awards presentation were shocking, painful, and inexcusable. The list of those I have hurt is long and includes Chris, his family, many of my dear friends and loved ones, all those in attendance, and global audiences at home. I betrayed the trust of the Academy. I deprived other nominees and winners of their opportunity to celebrate and be celebrated for their extraordinary work. I am heartbroken. I want to put the focus back on those who deserve attention for their achievements and allow the Academy to get back to the incredible work it does to support creativity and artistry in film. So, I am resigning from membership in the Academy of Motion Picture Arts and Sciences, and will accept any further consequences the Board deems appropriate. Change takes time and I am committed to doing the work to ensure that I never again allow violence to overtake reason.”

1. Objectively and out of context, that is an excellent apology, a #1 on the Scale.

2. Of course, Smith didn’t write it; he couldn’t if he tried. That’s OK; our President doesn’t write his speeches either. Whoever wrote it did his or her job, and is good at it, fulfilling the duty to Smith and demonstrating professional competence. Maybe a lawyer wrote it.

3. Reports are that Smith, his consultants, a lawyer or two and his publicist have been engaged in intense strategizing since the actor’s Instagram apology “went over like a lead balloon” (one of my father’s favorite metaphors) and the Academy announced that it would be taking some kind of disciplinary action against him. So let’s not pretend that “doing the right thing” had anything to do with the resignation and the letter. If Will Smith cared about “the right thing” to do, or could tell one from an aardvark, he wouldn’t have botched his first two statements, and he wouldn’t have hit Chris Rock.

The latest response was all a matter of professional survival and crisis management. That’s all it was.

3. Those same reports tell us that the resignation from the Academy was decided upon by Smith’s brain trust to ensure that he did not have his Oscar revoked. The theory, we hear, is that by preemptively “accepting” the mildest likely punishment that the Academy was likely to inflict on him (being kicked out of the organization is just an indignity; I’m pretty sure Will Smith won’t lose a lot of sleep over it. It would be like me being kicked out of the ABA), he will avoid the worst punishment. If that’s really their analysis, I don’t think the brain trust is all that brainy after all. There was no chance that the Academy would take away Will’s Oscar, and it would be wrong to do so. Others who have been kicked out of the Academy for far worse (arguably) than what Smith did last week have been allowed to keep their Oscars, notably Harvey Weinstein, and he wasn’t even black. Moreover, the Oscar was and should remain valid: Smith’s performance in “King William” was done, it was recognized for artistic excellence, and has nothing whatsoever to do with Smith’s personal character or professional failings.

4. There is a taint of “You can’t fire me, I quit!” to the timing of the resignation, which I would mark as one of the two flaws in his statement. The other is that Smith still hasn’t personally apologized to Chris Rock. That is either cowardly, or despite his expansive apology to the comedian in the statement, it suggests that his apology is insincere…

5…which I strongly suspect it is. Will Smith is sorry about what may happen to his career, and that’s all. If his outburst during the Oscars was truly a matter of “snapping” for a moment, as his apologists claim (among other excuses), the real apology wouldn’t have taken five days to materialize.

10 thoughts on “Now We Have Will Smith’s “Real” Apology”