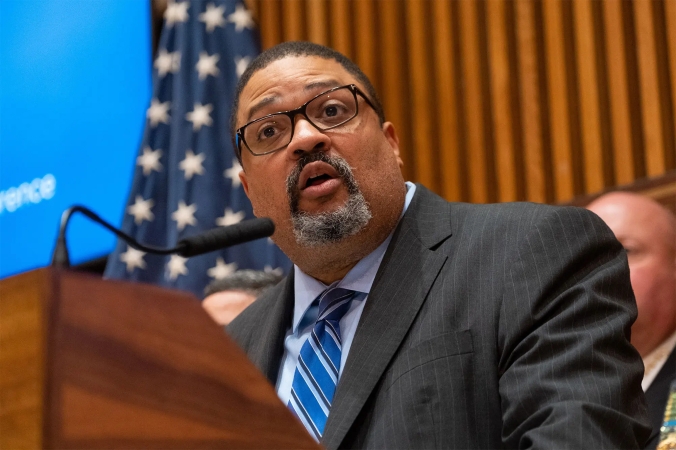 “Take that restorative justice bullshit and shove it up your asses! Not for murder!”

—-Madeline Bram, mother of murder victim Hason Correa, 35, a vet and married father of three who was beaten and stabbed to death by a gang in 2018, when the Manhattan Supreme Court handed down a seven year prison sentence to one of the killers.

Bram erupted after hearing that the absurdly light sentence had been agreed to by the office of Manhattan District Attorney Alvin Bragg (above). Bragg is one of several big city DA’s elected with the assistance of George Soros contributions (not that there’s anything wrong with that) who stand for leniency in the justice system as a solution to “over-incarceration.”

The solution to “over-incarceration” is for African Americans to commit crimes in rough proportion to their numbers in U.S. society. Minimizing the consequences of committing these crimes will not achieve that end.

San Francisco’s unethical prosecutor, a son of violent Sixties radicals, was just recalled and kicked out for failing his duties to the public much like Bragg, who also espouses the doctrine of “restorative justice.”  Another defendant in Bram’s son’s murder, Mary Saunders, served about one year in jail before she pleaded guilty to assault, also as part of a plea deal, earlier this year and got no extra jail time.

Brame sent a letter to Bragg and Gov. Kathy Hochul earlier this month, Brame protesting that the DA had not consulted her before cutting the plea deals with Stewart and  Saunders.

“You violated my rights as a crime victim to be fully informed and to be heard,” she wrote. “Why would you dismiss murder charges against half of the participants when the murder and their roles were caught on video?”

Yes, her language in court was uncivil and disrespectful. Sometimes, however, uncivil language is the most effective way to communicate an important point.

I submit that this was one of those times.

3 thoughts on “Ethics Quote Of The Month: Madeline Brame”