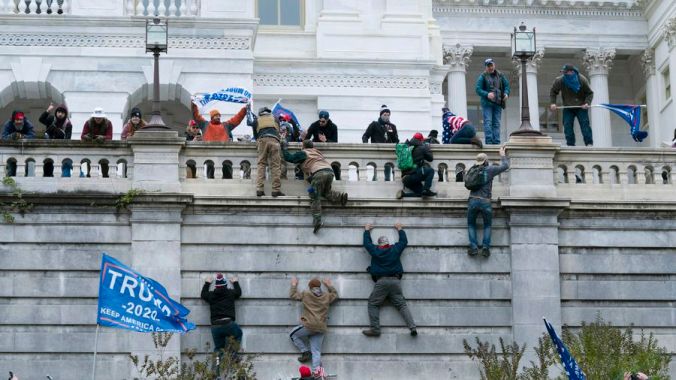 I can’t let this pass. I’ve been bashing my embarrassing alma mater here for years, and it finally is responsible for something that almost makes me want to hang the ol framed diploma up again, with the back of it to the wall again.

In the most comprehensive study to date of what motivated the Trump supporters to attack the Capitol, Shorenstein Center researchers found that 20.6 percent of the rioters, a plurality, were motivated to take part in the riot because they supported Trump. Another 20.6 percent of the rioters cited Trump’s fraudulent claims that the 2020 presidential election was rigged as their primary reason for participating in the Jan. 6 riot.

The authors of the study — Joan Donovan, Kaylee Fagan, and Frances E. Lee — wrote that their analysis found that the largest proportion of defendants “were motivated, in part, to invade the US Capitol Building by Donald Trump.”

The third most common reason for attacking the Capitol: a desire to start a civil war or an armed revolution, according to the study. Almost 8 percent of defendants indicated it was their main motivation.

In an interview, Fagan said she was surprised by how frequently support for Trump and concerns about the election were cited as primary motivations for joining the Jan. 6 attack on the Capitol.

“I don’t think I expected the result to be this stark,” Fagan said. “I also certainly didn’t expect those two motivations to come up nearly exactly as often as they both did.”

Though more than 800 have been federally prosecuted for their participation in the Jan. 6 Capitol riot, the study focused on 417 defendants charged with federal crimes in the U.S. District Court for the District of Columbia.

In other words, the riot was, as riots tend to be, one big, violent, stupid tantrum, like the George Floyd riots in the summer of 2020. It was not an “insurrection.” It couldn’t be, since less than 8% told researchers that their goal was to take over the government. (8% is also the standard idiot percentage in any public poll.) Nevertheless, the New York Times editors now refers to all news about the January 6 riot as “insurrection” developments, because the whole point to Big Lies is that you keep repeating them over and over, and that November reckoning for Democrats is closing in fast.

Will the mainstream media publicize the new research results? Well, we shall see. If they do, I suspect they will try to spin it like the Crimson does, with its deceptive headline, “Why Did Trump Supporters Storm the U.S. Capitol on Jan. 6? Because of Trump, New Harvard Study Finds.“

I can’t blame the Shorenstein Center for that. Trump didn’t make his most fanatic supporters rush into the Capitol, nor did he tell them to do so. His inflammatory rhetoric was (and is) irresponsible, but it’s a long, long way from incitement, as sane legal commentators from both ends of the political spectrum have pointed out. Now there is hard evidence that overthrowing the government was not on the minds of the rioters who had minds.

Good to know! Thanks, Harvard!