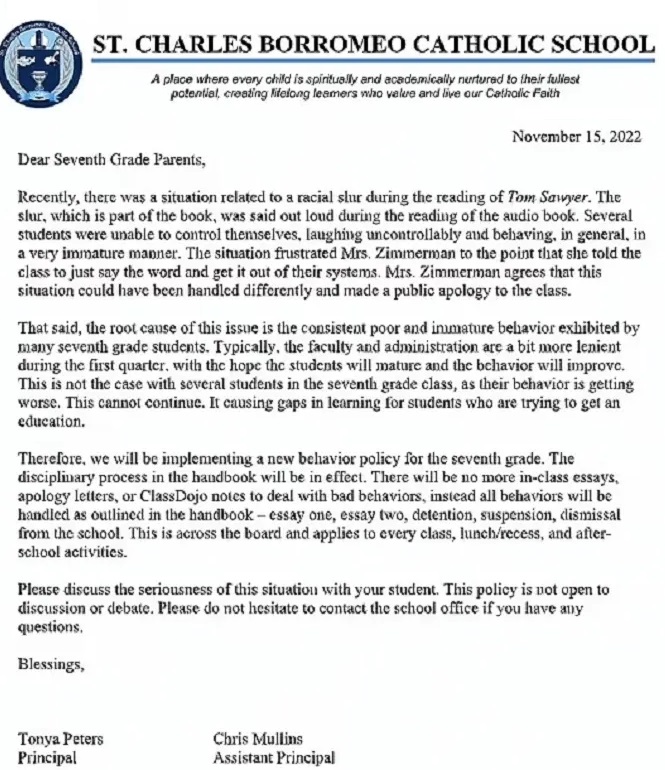 In a seventh grade English class at St. Charles Borromeo Catholic School in Port Charlotte, Florida, the teacher was presenting Mark Twain’s “Tom Sawyer,” using an uncensored version, which is to say, “Tom Sawyer.” The classic novel, like its larger, more ambitious cousin “Huckleberry Finn,” uses the now taboo “n-word” in a society today that should be too sophisticated and wise by now not to know that declaring words taboo is ethically and intellectually indefensible. One African-American community website’s news report on the incident states, “Anyone who has read an unedited version of those books know how racially insensitive they were.” Well:

As described in the letter above, when members of the class read the book out loud and the word “nigger” was uttered, the students began “acting up,” laughing, making comments, and generally acting like undisciplined 7th graders, which they were. When the teacher could not calm them down, she improvised a creative but risky solution: having the children repeat the word over and over again. The idea, obviously (though not sufficiently obvious for any of the media reports to figure out) was to rob the “taboo” word of power by repetition. It’s an old linguistic trick that kids should be familiar with (i know I was): when any word is repeated enough, it becomes just a sound, which is all any word is. (This device becomes the climax of the excellent horror film “Pontypool,” in which something causes the English language to become deadly, destroying everyone’s brains.)The kids may have learned something from the excercise; it’s hard to tell from the limited reports.  Many parents complained however, and when it became clear that the teacher, only identified as “Mrs. Zimmerman,” would not be disciplined or, as some demanded, fired, the mother of a black child in the class went to the news media. “It was horrible. It was awkward, it was embarrassing,” said the mother. “You don’t want to even think that would happen to your child.”

What “happened to the child”? I think it’s called “education” and “learning perspective.”

“You already know that word takes people back to a certain time,” the mother continued, “and they don’t want to remember that.”

The children don’t “remember that.” Literature brings past times and human nature into focus. People who don’t want to learn and understand these things become ignorant.

The mother described her confrontation with the teacher, saying, “And I asked her, ‘If the word was: F-U-CK, space, Y-O-U,’ would you tell the class to all say it together in unison?’  She said no.”‘

Too bad: the teacher obviously wasn’t ready for the question, because if she were teaching an age-appropriate book that contained the word “fuck,” the device she used with “nigger” would be just as appropriate. She should have said, “Yes.”

Yet despite all of the uproar and pressure, the leaders of the school refused to grovel or sacrifice the teacher because word-policing is in vogue with the woke. Instead, the principal, Tonya Peters, backed by her assistant, placed the blame for the incident on the misbehaving students, and, by extension, their parents and peers. The teacher apologized to the class by saying that she wished she had handled the problem differently; that’s an easy conclusion, since what she did blew up into a major controversy. She, however, was not and is not responsible for the underlying problem.

Making students shut up and pay attention is part of the solution, the uncomplicated part. Persuading society to stop dealing with problems and controversies by making them difficult to discuss is the real challenge.

The uncompromising letter is only a start.