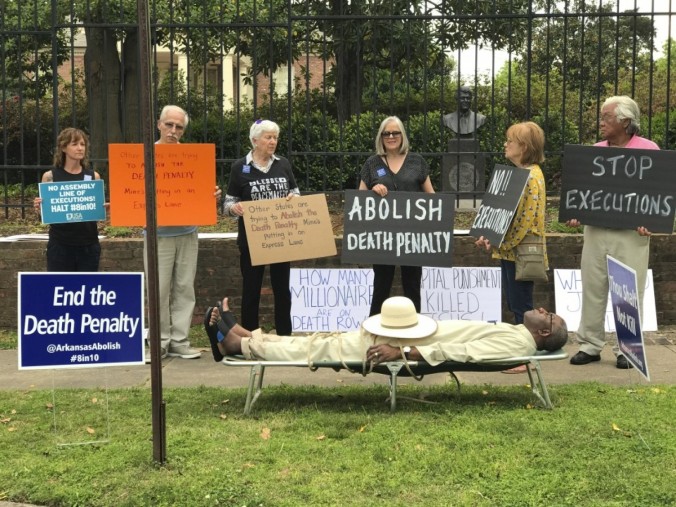 That’s the judge lying down. At least he wasn’t wearing his robe…

Arkansas circuit judge Wendell Griffen granted a temporary restraining order last week halting the Arkansas Department of Corrections from executing seven condemned prisoners within eleven days as it had planned, as Griffen barred the use of one of the ingredients in the lethal drug “cocktail.” A federal judge followed up quickly with anothee order likewise barring Arkansas from proceeding to execute anyone with a lethal injection. Mission accomplished,  Judge Griffen decided to reward himself by attending an anti-death penalty rally in which he participated with elan, playing a condemned prisoner lying prone on a lawn chair as if it was a gurney.

What fun! And what an idiot! No ethics alarms went off, despite the fact that he was flagrantly displaying his bias against the death penalty immediately after interfering with the state’s law enforcement based on a fair and objective interpretation of the law.

State officials were outraged, and argued that Griffen’s conduct proved that he was not capable of impartiality in capital cases. Ya think?

Yesterday the Arkansas Supreme Court pulled Griffen from all pending death penalty and lethal injection protocol cases. It also referred him to the state’s Judicial Discipline and Disability Commission to determine whether he violated the Code of Judicial Conduct. 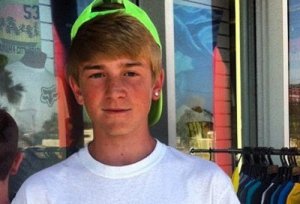 You may recall the so-called “Affluenza” case of 2013, which I wrote about here.

Ethan Couch a Texas teenager from a rich family, killed four people in a drunken-driving crash (he also had no license) and crippled a friend riding with him. Instead of jail time, the 16-year-old was given probation mandating expensive counseling and treatment by a judge who found herself vilified far and wide. Now this, from his lawyers, Reagan Wynn and Scott Brown:

“We have recently learned that, for the last several days, the juvenile probation officer has been unable to make contact with Ethan or his mother with whom he has been residing.”

A video surfaced showing Couch playing beer pong, which is a violation of probation that could send him to prison. The assumption is that he had fled to avoid that result, and may have even left the country. The Washington Post reports that The FBI and U.S. Marshals Service have joined the search for Couch, who is now considered a fugitive.

So, I am asked, how do the Ethics Alarms observations on the original sentence stand now, since it is clear that the judge’s attempt to reform Ethan without locking him up has failed?

The answer is, having read what I wrote initially again, that I wouldn’t retract a word.

Here’s what I wrote, and my comments now: END_OF_DOCUMENT_TOKEN_TO_BE_REPLACED

OK, I grant you, he drugged his wife to rape her for three years. But she was snippy when she was conscious…have some compassion!

In Indiana, Superior Court Judge Kurt Eisgruber decided that jail time was too harsh for David Wise, who was convicted of  drugging his wife, raping her in her sleep, and videotaping the rapes…for three years.  He sentenced Wise to eight years of home confinement, with the remaining 12 years of his 20-year sentence suspended. Prosecutors had asked for a forty year sentence.

For some reason, Wise’s victim and former wife Mandy Boardman still holds a grudge. She recounted to the press how she would wake up puzzled, with a half-dissolved pill in her mouth. Finally, all became clear when she found videos of sexual encounters on Wise’s cell phone, and her husband confessed to her that his non-consensual sex with his drugged wife had been going on for more than three years. In trial, he explained that she was a little snippy sometimes, so drugging her and having her unconscious during sex made it a lot more pleasant for him.

Judge Eisgruber has declined to explain why this horrendous crime doesn’t warrant imprisonment, though he is running for re-election unopposed this fall, making a write-in campaign for, well, just about anybody or anything essential, I would think. He did express concern with the victim’s conduct, however, imploring her to forgive her ex-husband for his astounding breach of  trust, respect, fairness, dignity, and honesty, not to mention the law, telling Boardman during the sentencing  hearing, “I hope that you can forgive him one day, because he’s obviously struggled with this and struggled to this day, and I hope that she could forgive him.” The judge added, helpfully,

“Ultimately, I think that helps a lot of people heal — it helps them to reach that point. Some can, some cannot. I’m not in her shoes, I’m not able to say one way or another … It’s not something that’s limited to her or this case. But when people are really struggling, I just offer that out. … I just hope that they find peace.”

END_OF_DOCUMENT_TOKEN_TO_BE_REPLACED 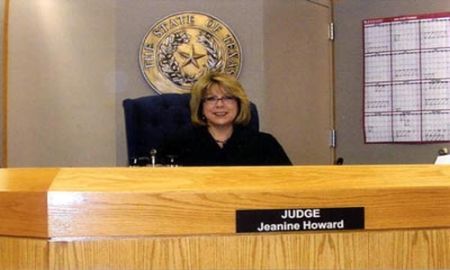 —-Texas District Judge Jeanine Howard explaining her stunningly lenient sentence of probation and community service—“250 hours of community service at a rape crisis center” !—for a confessed rapist of a 14-year old girl at her school.

The sentence  was not merely lenient but probably illegal, and a it seems likely that the sentence will be altered by another judge. Nonetheless, this kind of result, based on the judge’s assessment that the victim was promiscuous and had been pregnant (which she denies) will certainly make other rape victims think twice before they report the crime. Bobby Villareal, executive director of the Dallas Area Rape Crisis  Center, told reporters…

“This is an example of why people don’t come forward and report their sexual assaults because they are not only victimized at the time but the continuing game of shame and blame. They are put on trial again in the judiciary and the media. The things that were said were outrageous and some of them were actually untrue that were reported.”

Judge Howard seemed to be making up the law and sentencing guidelines on the fly. The rapist, 20-year old Sir Young, never denied that he had raped the girl, or that she hadn’t strenuously told him to stop. “Consent is not an issue and it wasn’t an issue because he admitted he didn’t have her consent,”  prosecutor Andrea Moseley said. “When consent is not an issue, a victim’s past is never appropriate for comment. That’s my problem with it as a woman and as a prosecutor. I was certainly disappointed in the message I think it sends to the community.”

The community can send a message back, as Judge Howard is up for re-election in the fall, but it won’t be easy. A Democrat, she is running unopposed. END_OF_DOCUMENT_TOKEN_TO_BE_REPLACED

For whatever reason, there have been a lot of attacks on the legal profession lately—and some from within the legal profession—because of so-called “disgusting” and “frivolous” arguments by lawyers who are zealously representing their clients. These range from outrage over the so-called “affluenza” defense (which, it apparently does no good to point out, was explicitly rejected by the judge in that case), to the law suit against the Glendale, California memorial to women forced into sexual slavery by the Japanese in World War II, to the argument that Red Sox broadcaster Jerry Remy was complicit in his son’s allegedly murdering his girlfriend because Remy hired a lawyer who mounted a vigorous defense in the son’s earlier domestic abuse arrests.

Lawyers are ethically obligated to advance whatever non-frivolous arguments and theories that are most likely to achieve their clients’ objectives, whether it is avoiding prison or rationalizing the crimes of the Japanese army. That is their job and societal function, and it is essential to our avoiding a jack-boot system where any of us could be thrown in jail by popular opinion or government edict. The laws are there to be used by every citizen, even when the citizen’s objectives are unethical, or when the citizen is a cur.

Our rights are all protected well by this principle, and it’s high time we stopped bitching about it.

Undeterred by this, however, yet another defense attorney is being savaged in the news media and blogosphere, as well as by women’s rights advocates, for making an argument in defense of his client that they find offensive. In Georgia, Darriuos Mathis and his legal team are making the argument, among their efforts to show that the evidence against him is not sufficiently conclusive, that Mathis is too attractive--fit, handsome, sexy– to have to resort to kidnapping and raping a 24-year-old woman two years ago, which is what he charged with.

END_OF_DOCUMENT_TOKEN_TO_BE_REPLACED

Disclaimer the first: I’m not an attorney, nor do I play one on TV. Disclaimer the second: I have no knowledge of Texas law regarding juvenile justice, nor do I have any knowledge of Texas state law regarding negligent vehicular homicide, nor do I have any real knowledge of that state’s laws regarding DUI, homicide, manslaughter or murder. And yes, I know the difference between murder and negligent vehicular homicide, and I am also aware that young Mr. Couch is a minor. Disclaimer the third: I have not read Judge Boyd’s actual ruling, nor have I seen actual video of her sentencing. If someone could provide a link to that (if a link exists), it would be appreciated. That being said: END_OF_DOCUMENT_TOKEN_TO_BE_REPLACED

Arthur King of WGAN newsradio engaged me in a segment of his show “Inside Maine” this afternoon.

You can, if you are so inclined, hear it here.

Much thanks to Arthur for the chance to chat with him about these issues.