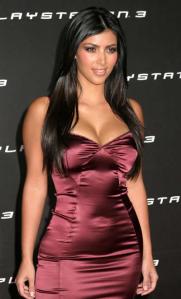 " Hi! I'm Kim Kardashian, here to tell you that making a sex tape is a terrible mistake, even though my own sex tape made me and my two equally shallow sisters rich celebrities. Don't make the same mistake I did. Really. Trust me."

The Candie’s Foundation is a non-profit organization that, according to its website,

“…works to shape the way youth in America think about teen pregnancy and parenthood. We are an operating foundation rather than a grant-making foundation. The foundation develops and runs communication campaigns to raise awareness about, and motivate teens to prevent, teen pregnancy.”

The main source of its message to teens right now is that “Dancing With The Stars” icon, Bristol Palin. Palin, now 20, qualified herself for the assignment of speaking to teens about the importance of avoiding getting pregnant by getting pregnant when she was 16, and doing it center stage, while her mother was the Governor of Alaska. Thus using her position in Alaska’s first family to add prestige to the role of unwed teenage mother in that state, Bristol went on to national prominence as Sarah Palin campaigned for Vice President on the GOP ticket, with Bristol demonstrating during and after that jaunt that marrying the father of your child might not be such a good idea either, since he might be, as in the case of Bristol’s short-term fiancee, Levi Johnston, an immature, selfish, publicity-seeking dimwit.

Having done maximum damage to everyone but herself by becoming pregnant (with significant help from Levi, naturally), unwed mother Bristol Palin parlayed her own irresponsible behavior into the job of spokeswoman for The Candie’s Foundation. Well, her mother, I think it is fair to say, did the parlaying. It never hurts to help a prominent and rising cult political figure’s wayward offspring. Who knows when you might need a favor…or have an unemployable offspring of your own?

Bristol goes around the country talking with students and other teenagers, reminding them that they are too young to have kids, and that they should wait because it will screw up their lives. Of course, all of these teenagers know that the unwed, former teen mother telling them this has absolutely no credibility, and in fact represents the much more optimistic ( and completely unrealistic for anyone whose family isn’t rich and/or famous) position  that you can have a baby in your teens, get on lots of magazine covers, have your mother get you a job traveling around the country talking about it while someone else takes care of the baby, and become a celebrity in the bargain. Neat-o!

In other words, she’s as effective an advocate for avoiding teenage pregnancy as Kate Gosselin would be for having fewer children. Never mind, though; tax documents show Bristol Palin earned more than $262,000 from The Candie’s Foundation for teen pregnancy prevention in 2009.

As for the Foundation, what its real objective is seems murky. The organization gives a pittance to actual teen pregnancy programs, but using that as a standard for evaluation, as the hard Left website ThinkProgress wants to do, is deceptive (or ignorant). There are grant-making foundations that give money to the programs run by other groups, and operating foundations, which do their own programs. Criticizing an operating foundation like The Candie’s Foundation for not making grants is like criticizing Baskin Robbins for not selling enough hamburgers. Still, the way the Foundation spends its money seems peculiar, to say the least. The Candie’s founder is Neil Cole,  Chairman of the Board, President and Chief Executive Officer of Iconix Brand Group, Inc., which he launched in 1993. His company sells teen fashions, which means that Bristol is talking to the market for the company that funds her travels through The Candie’s Foundation.  As a result, many believe that the foundation is really a PR front.

Mr. Cole has a history of not exactly making his real purposes known. In April 2003, without admitting or denying the SEC’s charges , he consented to the entry by the SEC of an administrative order in which Cole agreed “to cease and desist from violating or causing any violations or future violation of certain books and records and periodic reporting provisions and the anti-fraud provisions of the Securities Exchange Act of 1934.” He also paid a $75,000 civil monetary fine.

With that background, here is your Ethics Quiz for today, a multiple choice:

Question: How would you characterize The Candie’s Foundation paying Bristol Palin $262,000 (not counting expenses) to travel around the country speaking to teens about the perils of teen pregnancy?

A. Irresponsible: As someone who has turned her unwed motherhood into a lucrative career, celebrity status and reality show stardom, Palin is a terrible choice to deliver that message.

B. Corrupt: This has to be some kind of political deal with Sarah Palin. Otherwise it makes no sense.

C. Trustworthy: Bristol’s message is an important one, and the Foundation is doing vital work through her efforts.

D. Deceptive: This a clever brand marketing campaign for the clothing manufacturer, using the non-profit status of a foundation to get a tax break for a marketing and public relations effort.

E. Incompetent: The Foundation is sincere, but stupid. It is wasting its money.

9 thoughts on “Ethics Quiz: The Candies’ Foundation and Bristol Palin”