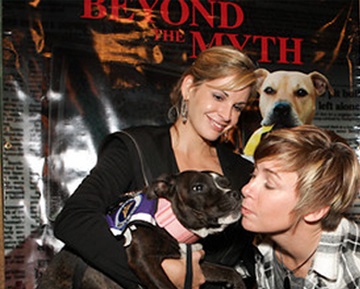 “Beyond the Myth” is a 2012 documentary that provides a vivid, troubling and often moving account of “breed specific legislation” in the U.S., which primarily involves states and municipalities banning “pit bull-like dogs,’ a.k.a. “vicious dogs,” though the dogs such legislation targets are usually not vicious and often are not even pit bulls.  If you are one of the misinformed who have been convinced by biased reports and public hysteria that pit bulls are any more dangerous or vicious than any other breed, you owe it to yourself, your children, and the dog owners in your community to watch this film, which is available on Netflix.

Long-time readers of Ethics Alarms know that the site has visited the issue of anti-pit bull cruelty and bigotry frequently, most recently here. For those who have read and absorbed what I have written and the references I provided, there will be much that is familiar in “Beyond the Myth,”; nevertheless, I found the documentary shocking. I had no idea how pit bull bans worked in cities like San Francisco and Miami, with Gestapo-like raids on private homes culminating in harmless and beloved family pets being confiscated and slated for death if a police officer concluded that they have “5 out of 8” physical traits identified with pit bulls. Nor was I aware of how many of these dogs were being euthanized—tens of thousands every year—for being born with a broad  head or a deep chest that meant they were legally branded as “vicious.”

The stories of the individual dog owners who have organized, lobbied, sued, and in some cases had to move out of their homes to protect a loving canine companion are also inspiring, if astounding. Wounded veterans have even had their service dogs taken from them. The most illuminating aspects of the documentary, however, are:

One more observation: anyone who isn’t struck by the parallels between the response to pit bull attacks in these communities and the national gun control debate in the wake of the Sandy Hook shooting isn’t paying attention.

22 thoughts on ““Beyond the Myth”: Disturbing and Revealing Lessons About More Than Pit Bulls”