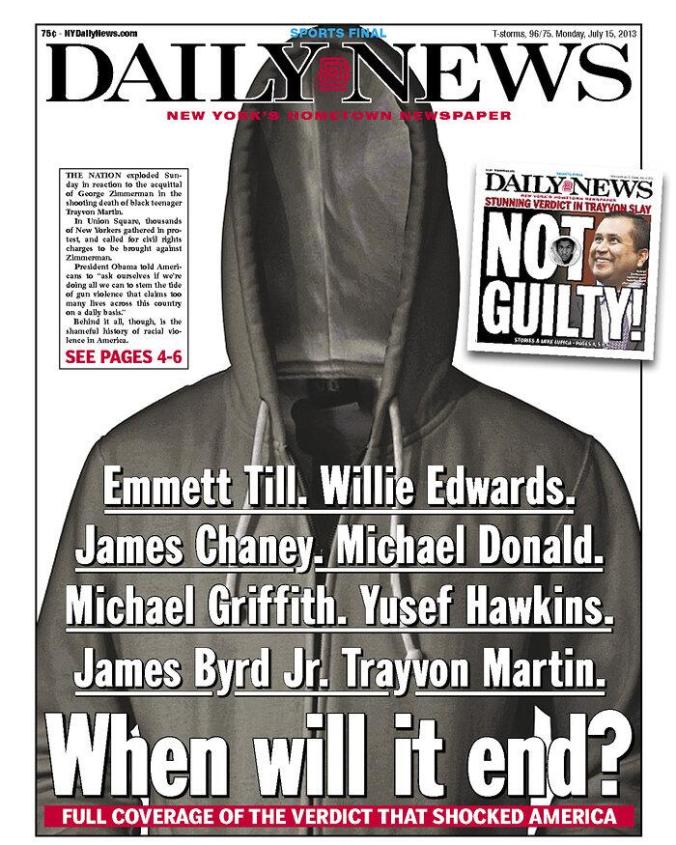 If we want it to be true, then it will be true…

I awoke to find this in my Washington Post Style Section this morning, in the column devoted to notable events in D.C. theater. My personal Facebook page is fairly well linked to the Washington , D.C. theater community, so I decided to register my disgust there. I’m continuing it here, and in the interest of economy, will simply repeat what I just posted on Facebook.

I will just add this: I foolishly assumed that the irresponsible, and either ignorant or malign attempts to equate the killings of Emmett Till and Trayvon Martin were isolated examples of race-baiting excesses, and would be widely rejected and debunked by more responsible figures and authorities. Not only did this not happen, but that indefensible comparison, and the damaging falsehoods it is intended to plant, like a deadly virus,  in our national fabric, is beginning to take hold as truth.

Anyone, regardless of race and political or ideological belief should be able see how intolerable this is. Everyone has an obligation to do what they can to stop it.

Emmett Till to Trayvon Martin: A Town Hall Meeting on Black Bodies and American Racism” this Friday. Theater is a crucial medium to explore important societal issues openly and passionately. It cannot do this if it yields to partisan agendas and frames issues in ways that make objectivity and enlightenment impossible.

The story of Emmett Till has no parallels whatsoever with the tragedy of Trayvon Martin, and I would expect honest, educated, fair-minded professionals, whatever their point of view on the Martin-Zimmerman case, to use their influence to counter-balance and oppose the disgraceful and ignorant statements by Oprah Winfrey and others. That Carolyn Boyd, minister of organizational development at Plymouth Congregational United Church of Christ; Louisa Davis, adjunct professor of religion and ethics at Montgomery College; Dennis B. Rogers, assistant professor of political science at Bowie State University, not to mention Woolly itself, would lend their names, prestige and credibility to any forum with such a deceptive and factually untrue title ( “From Emmett Till to Mr. Magoo” would be as accurate) is disillusioning beyond words. As an ethicist, or as theater artist, I would not only refuse to appear at any forum so irresponsibly titled, but also release a statement condemning it.

Just so the reasons for my strenuous objections are clear: Emmett Till’s murder was a horrific, open-and shut case of racist, Jim Crow era hate. He was tortured and murdered for doing nothing at all (he supposed flirted with a white woman). His white, smug and unrepentant killers were gleefully acquitted by an all-white jury that didn’t regard Till as a human being, then came forward under the shield of double jeopardy to accept payment for an article proclaiming their guilt—and pride.

Trayvon Martin, in contrast, a black teen shot in a pointless confrontation sparked by a mixed race, law-enforcement officer wannabe who was over-zealously guarding his gated community’s security. The evidence on whether Martin’s race was a determinative factor in the event is equivocal and circumstantial at best. There is no evidence that Zimmerman attacked Martin, or intended to attack him. It appears that the teenager was reasonably frightened at being followed, made a poor decision to confront Zimmerman, the confrontation escalated into a fight in which the teen got the upper hand, and Zimmerman discharged his weapon either accidentally or in self-defense….not because the teen was black, but because the teen was beating him and he felt helpless to defend himself.

If the facts were otherwise, there were no witnesses and no way to prove this beyond a reasonable doubt, which is the correct, vital, long-standing, fair standard for determining criminal guilt. The Zimmerman jury not only acted correctly and justly, but also courageously, and is as far removed in every way from the racist, kangaroo court jury in the trial of the Till slayers imaginable.

Nevertheless, out of ignorance, malice, hate,emotion or cynical political agendas, figures such as Oprah Winfrey, the Martin family’s attorney, the New York Daily News, Al Sharpton and others have been attempting, apparently with success, to equate Till and Martin….and virtually no one in a position to do so has called this what it is: a Big Lie, and a terribly destructive one. Why? I presume because they are afraid of being called “Zimmerman supporters” (Zimmerman was 100% at fault for starting this fatal chain of events, and the evidence might have been sufficient to convict him of manslaughter in another state—that doesn’t make him like the killers of Emmet Till) and racists. So the voice of reason and moderation, as well as historical accuracy, has effectively been silenced by intimidation.

When theater starts spreading politically useful lies and distortions, that is called propaganda. When those lies are as harmful to the fabric of society as this one is, it is called artistic malpractice….and yet there is the Washington Post, hailing a local company’s decision to throw gasoline on the fires of racial miscommunication started by the Martin trainwreck as if such irresponsible conduct is exemplary.

This is how lies become accepted truth. Neither the theater community nor journalists should be a party to it—especially in the sensitive area of race–indeed, they have an obligation NOT to.