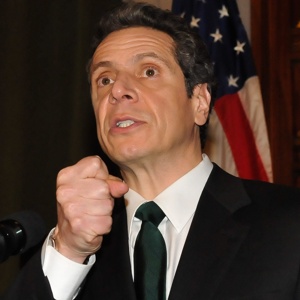 “Guns are a public menace! We must not permit lawless, reckless gun possession! Unless it’s a member of my staff, of course, in which case, meh, no biggie.”

[UPDATE: Jerome Hauer disputes some of the reported facts in this post. I have yet to find any sources that have different facts, but I will revisit both the story and my conclusions, and make appropriate revisions, retractions, or clarifications if and when warranted. You will find Mr. Hauer’s comment, and my reply to him, below.]

New York Governor Andrew Cuomo has been the source of some of the most excessive anti-gun rants making up the sorry legacy of the Post Sandy Hook Ethics Train Wreck. It was a year ago that a unveiled a package of strict gun restrictions, saying that with “the senseless massacre in Newtown, Connecticut… New York must say enough is enough to gun violence.” Oh, Gov. Cuomo hates guns, believe you me.

So what do you think happened when it was revealed that Jerome Hauer, Cuomo’s Division of Homeland Security and Emergency Services Commissioner appointed in 2011, had not only been carrying a handgun to work ever since, but also, incredibly, took out the gun and used the laser sighting device attached to the barrel as a pointer in a presentation to a Swedish delegation on Oct. 24? Hauer was not only breaking the Cuomo-backed law barring state employees from packing a weapon at their workplace, but also was modeling the kind of ignorant and dangerous firearm misuse that undermines any claim that he was a safe, responsible, well-trained gun owner.

What happened appears to be this: as soon as the Governor got word that Hauer’s illegal and reckless conduct was about to be revealed in the press, the Homeland Security chief received a quick waiver from New York’s Office of General Services Commissioner RoAnn Destito. The waiver, of course, could not make his prior conduct legal.

When this came to light this week, Cuomo did a little spinning dance, defending Hauer at a news conference by saying that he’s “comfortable” with commissioners carrying weapons to work as long as they have gun permits, and “if they are licensed and in that field of work.” Hauer is not a law enforcement officer or working in law enforcement. And there is the matter of his breaking the law for three years (whether Cuomo is “comfortable” with it or not) and behaving like an idiot by using a weapon as an audio-visual aid.

Why should anyone take laws seriously that are made and administered by officials who feel they and their cronies can violate those laws at will? If Governor Cuomo were serious about regulating guns (rather than just restricting gun ownership by anyone who isn’t a member of the ruling elite)… if he understood  how critical it is to maintaining the public trust that laws are seen to be enforced equally regardless of status, position and connections…if he wanted to prove that his anti-gun position wasn’t merely interest group and Democratic base pandering…indeed, if he had a shred of integrity and any operating ethics alarms at all that weren’t muffled by his astonishing arrogance, he would have used Hauer as an example, fired him, and prosecuted him.

Note: Hauer is disputing details in the story, though it seems beyond dispute that he broke the law for some time before receiving the quickie waiver, and denies the pointer incident, though there were witnesses—Swedish witness!— (and it sure seems too ridiculous to be made up.) As usual, only local papers and the “conservative media” are covering the story so far.

Jerome Hauer has been swiftly granted a waiver for the gun that he has apparently regularly carried to events with the Governor, in strict violation of state law.

The Division of Homeland Security and Emergency Services Commissioner was hired  by Cuomo in 2011 and coworkers say he has been carrying the gun to work ever since.

Jerome Hauer has been swiftly granted a waiver for the gun that he has apparently regularly carried to events with the Governor, in strict violation of state law.

The Division of Homeland Security and Emergency Services Commissioner was hired  by Cuomo in 2011 and coworkers say he has been carrying the gun to work ever since.

35 thoughts on “Governor Cuomo’s Selective Anti-Gun Fervor: And This Is Why So Many Americans Have No Respect for Laws Or Lawmakers”