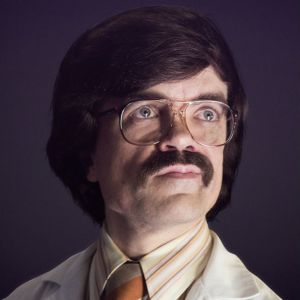 The People Magazine review of “X-Men: Days of Future Past” contains this sentence:

“You’ll understand her motivation when you meet Dr. Bolivar Trask (Peter Dinklage), a government type who creates the sentinel project, and is even more sinister than his Magnum P.I.-by-way-of-IBM looks would suggest.”

For anyone who has seen the movie, or even anyone familiar with the (excellent) actor, Peter Dinklage, I have this question: What is odd about that quote?

For it is extremely odd.

I have been trying to devise a benign explanation for it that doesn’t also involve incompetence. I suppose the sentence could be tongue in cheek if its author, Alynda Wheat, sincerely believes that everybody who reads her review a) subscribes to HBO,  b) watches “Game of Thrones,” and c) pays attention to the show’s credits. So what is so strange about the quote above? Give up?

This: Peter Dinklage is a dwarf, or more politely, a “little person.” He resembles “Magnum P.I.,” aka  actor Tom Selleck, currently the star of CBS’s “Blue Bloods<” about as much as I do, and perhaps less. Nobody, and I mean nobody, would look at an actor who is 4’5″, like Dinklage, and say, “Wow! That guy is a dead ringer for Tom Selleck!” Selleck is 6’4″.

So what is this, other than really bad writing and reportage? Sadly, I think it’s another manifestation of the creeping political correctness that is infecting the nation’s honesty, candor, fairness, tolerance and speech.  It is politically incorrect to mention Dinklage’s height, which is a disability or a deformity, so in thrall to the demands of self-censorship, the reviewer not only doesn’t allude to it, but actively misleads readers who don’t know Dinklage by writing as if it doesn’t exist.

Her description, in other words, is a lie in service of political correctness. If her editor at People knew who Dinklage was, then the magazine was complicit in Wheat’s deception.

This is airbrushing reality, the next sinister stage of virulent political correctness. I don’t believe that a journalist is bound to mention Dinklage’s height in everything written about him, just as the fact that Tina Fey has a rather prominent scar on her face–unusual for an actress–is not relevant or necessary information in every article about her. Nevertheless, Dinklage’s height is his most distinctive feature: he is the preeminent little person on TV today, though not nearly the preeminent actor. But to write a description of a character played by Dinklage as if his height deficiency doesn’t exist is unethical and inexcusable.

If we aren’t going to wake up some morning and find ourselves bound and gagged by the political correctness police, all of us are obligated to call out this crap, for crap it is, whenever and wherever we see it.

90 thoughts on “Political Correctness Files: X-Men, People Magazine And The Case Of The 6’4″ Dwarf”