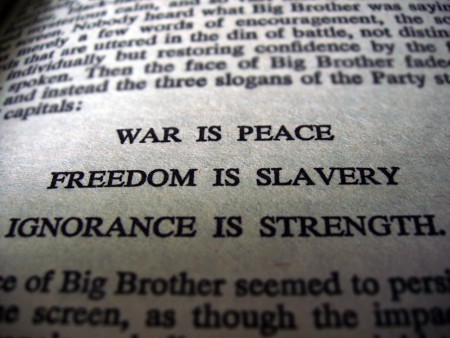 I recognize that President Obama and his entire administration feel they are hostage to an infantile, irresponsible, pacifist  “base” that cringes at the concept of the kind of combat that might occasionally be necessary to preserve our liberty and keep the evil in the world at bay. (I also recognize that the Paul faction in the Republican Party is similarly addled.) That our leaders cater to such confusion is regrettable, indeed, frightening, since it means that they value the welfare of the nation and the world less than the objective of keeping their most naive and ignorant supporters happy. (The alternative, that they feel the same way as this historically unschooled mass is too horrible to contemplate, and I just refuse to believe it.) But when kowtowing to the delusion causes our leaders to embrace Orwellian language designed to declare the opposite of truth in pursuit of political advantage, even those cheered by the fantasy have an obligation, as citizens and as responsible human beings with brains, to protest.

Secretary of State John Kerry just denied that dropping bombs on a state constitutes warfare. WAR IS PEACE, you see.

In Saudi Arabia, Kerry corrected CNN reporter Elise Labott when she described the widening armed conflict between the Islamic State and the United States as a war. “I think that’s the wrong terminology,” Kerry said. “What we are doing is engaging in a very significant counter-terrorism operation.

I think “Secretary of State” is the wrong terminology for John Kerry, come to think of it. I think “Perfect Embodiment of the Peter Principle” is more appropriate. “Irrefutable Explanation of Why George W. Bush Served Two Terms”  is better too. Neither of these euphemisms for “John Kerry,” however, approaches the dishonesty and contempt for language and meaning that “significant counter-terrorism operation” does as a description of dropping bombs, which just isn’t something one does during peacetime.

Moreover, this contempt for obvious truth establishes a pattern. A government that will lie to the face of the public it serves cannot be trusted, and a public that allows its leaders to insult them with such obvious lies is assenting to being treated like sheep and fools.

The Obama administration has done this before, during the Libyan operations, when it denied that bombing was “hostilities” within the War Powers Acts. Refusing to be treated with such disrespect should not be a partisan matter: it’s a matter of civic responsibility. War is Hell; war is also war. It’s too bad that, once again, reality has mugged President Obama’s fond dreams, but it we allow our government to talk to us like idiots, then we are idiots.

12 thoughts on “When U.S. Officials Channel Orwell, U.S. Citizens Have An Ethical Obligation To Object Loudly”