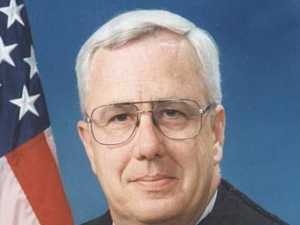 Last year, I wrote a post about the intemperate blogging of Judge Richard G. Kopf, a senior district court judge on the U.S. District Court for the District of Nebraska. Actually intemperate doesn’t quite describe it: in his criticism of the Supreme Court’s decision in the Hobby Lobby case (the Ethics Alarms discussion is here) he wrote, “As the kids say, it is time for the Court to stfu” and linked to the Urban Dictionary so his less cool readers would take his meaning. I wrote:

That he did this on his blog, Hercules and the Umpire, doesn’t matter. It was in print, in public, and he’s a Federal judge. The obscenity came in the context of Judge Kopf’s criticism of the recent Hobby Lobby decision, but the context doesn’t matter either. There is no context in which it would be appropriate, judicial and ethical for a member of the judiciary to tell the Supreme Court of the United States to shut the fuck up. Nor does it matter that he used the texting code stfu rather than spelling out the words.

For a Federal judge to be openly disrespectful, uncivil and abusive to the top of the nation’s judicial branch is an assault on the rule of law, and undermines public respect for our institutions…. If the objective is to speed a complete breakdown in public respect for our institutions, divisive partisans like Kopf  and Wilson are doing a bang-up job. Neither they, nor you, nor I will like where this will lead if our leaders and officials don’t come to their senses.

This post, of all posts (I don’t think my position is rationally assailable, frankly) managed to get three commenters banned from the blog, essentially by 1) arguing that the Roberts Court doesn’t deserve the usual respect due to any court, and 2) telling me to “stfu.”  All were Judge Kopf acolytes who weren’t going to stay here to contribute anything positive, just uncivil, arrogant progressive lawyers who the judge-blogger had trained well.

“Any rational person understands that we must accept decisions we like and decisions we don’t like when we ask the highest Court in the land to decide difficult hot button questions for an entire country. Judicial retention elections are fine for Nebraska and all the other states that have developed unique and parochial histories and traditions. However, we are talking about a federal Constitution–one that protects and covers 320 million people from Maine to Hawaii. Given the fractious divisions in our country that exist now (and many times in the past) and the obvious geographical fissures among the states (Red State/Blue State), judicial retention elections, fueled by whether a majority likes or dislikes particular Supreme Court rulings at a given point in time, is a formula for chaos and for further dividing our country into factions, a well placed fear held by the Founders.”

Wait…who is this guy? Surely he bears no relation to the sneering, potty-mouthed anti-Supreme Court critic I wrote about the last time?

Canon 5 in the Code— “A Judge Should Refrain from Political Activity” includes Canon 5A(2), which directs that a judge should not

“make speeches for a political organization or candidate, or publicly endorse or oppose a candidate for public office.”

Gee, I’d say that writing a a blog post declaring that a specific U.S. Senator running for President isn’t fit for the job directly violates that provision, wouldn’t you? I wonder how this judge missed that? Of course, Kopf didn’t miss it. He just thinks the rules don’t apply to him. People in power are dangerous when they start thinking like this…especially judges.

For the record, Kopf’s specific criticism of the statement by Cruz that prompted the post is well-reasoned and valid. I agree with him completely. As lawyer and legal ethicist Richard Painter points out, however, Cruz’s suggestion that Supreme Court justices should have term limits is not so “radical” that it should disqualify him from the White House, especially since the President can’t make such a change anyway. Even if it were as radical as Kopf claims, there was no need to attack Cruz to rebut his position.

Three days after his latest unethical post, Judge Kopf announced that he was “pulling the plug” on his blog.  He made it clear that no one had told him to do so, and that criticism of his controversial posts played no part in it:

I am pulling the plug because I learned a couple of hours ago about a discussion held at a retreat for our employees. The retreat had to do with honesty in the workplace, especially when dealing with uncomfortable subjects. Chief Judge Smith Camp attended the meeting and was asked a question.

The question was this: Did the Chief Judge feel that Hercules and the umpire had become an embarrassment to our Court. She responded that she thought 95 percent of the posts were insightful, entertaining, well-written, and enlightening. Then she asked for a show of hands, inquiring how many of the employees felt the blog had become an embarrassment to our Court. The great majority raised their hands. The Chief then told them that she appreciated their candor, and that she would share with me their sentiments.

Chief Judge Smith Camp was as a good as her word. She shared the sentiments expressed at the retreat with me. She did this both by e-mail and by telephone. She did not ask me to stop blogging. On the contrary, she praised my efforts. I was the one who expressed the need to call an end to the blog. There is nothing more important to me than the United States District Court for the District of Nebraska. If I have lost the confidence of our employees through publishing the blog, then I have harmed the Court. I cannot tolerate that thought, and I have therefore decided to pull the plug. My decision is irrevocable.

A good and ethical decision, from an obviously thoughtful and complex man. If he had re-calibrated his ethics alarms just a bit after the Hobby Lobby post, maybe he would be blogging today—and it was a good blog, as he says, 95% of the time.

Maybe, however, the kind of unfiltered candor and passion that makes a good blog is incompatible with being an ethical judge, at least for some of them.

One thought on “From The “I Told You So” Files: Judge Kopf Finally Decides To “STFU””