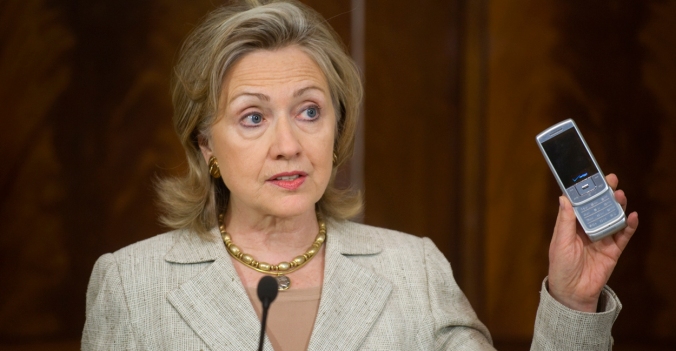 [Yes, I know I dragged Clinton into the previous post, but it was about The King’s Pass. How could I not? Anyway, if you troubled by HRC’s recent predominance here, 1) Would you prefer Donald Trump? 2) Read this. Memorize it.]

A lot happened on The Hillary Cyber Highway this week. Here are links to stories you should know about, and brief comments by me:

1. Of course she did. A federal judge said unequivocally that Clinton’s handling of her official e-mails violated government policy. The State department also admitted that it allowed Clinton to use her own smartphone to send, receive and store official e-mails. I cannot begin to explain how reckless and irresponsible that is for both Clinton and State.

2. Because she’s a liar, you idiot!   This morning on MSNBC’s Morning Joe, poor co-host Mika Brzezinski, who shills for Democrats at every opportunity, couldn’t get her mind around a concept that uncorrupted observors realized many years ago.  “Her campaign staff have said that her use of a personal email account was consistent with her predecessors, and permissible under department policy at the time,” Brzezinski said. “Is it or isn’t it? Because they say it is, Hillary Clinton’s staff say it was permissible under department policy. Is that true? Why do they keep saying that?” Poor Mika. Tell me again why someone this dimwitted is permitted to host a public affairs program, even on MSNBC.

3. Even being hired by Hillary calls your integrity into question. GOOD! Platt River Networks, a data storage company hired by Clinton in 2013, after she had improperly handled the official e-mails containing classified information, had to explain itself to avoid a public relations nightmare. Platte River had nothing to do with Clinton’s private home server. It took over  four months after Clinton left the Secretary of State job on Feb. 1, 2013.  “Because we use industry best practices, we had (Clinton’s) server moved to a data center in New Jersey. It remained in that spot until last week,” when the FBI picked it up Aug. 12, the company spokesperson said.

(Meanwhile, when the “Hillary’s server was stored in a bathroom in Denver” story was making the rounds, Mike Huckabee said that this gave a whole new meaning to “wiped clean.” Stay classy, Mike!)

Unethical —but FUNNY!—Hillary Defense of the Week: James Carville. Carville emerged from the Stygian depths to say this:

“Let me ask you a question, why is she beating every Republican and has better favorability ratios than any Republican running for president and it’s supposed to be the Democrats that are freaking out? I mean, look, polls go up and down. This is – this is foolishness. I’m having to come out of my vacation to deal with this kind of stupidity that these people are putting out. And Hillary’s going to be just fine. She’s going to be just fine. Did you read the Jeffrey Toobin piece in The New Yorker that says basically there’s almost zero chance that she did anything that was wrong? And this always goes on. This goes on and on, it’s never going to stop. And you know, these people, “We don’t like Hillary. Why is Paul Begala and Jim Carville out there defending her? Why can’t we just attack her like we want to?” And I understand that, I’ve been dealing this for 23 years now….it’s not going to amount to a hill of beans, just like all of the other stuff that I’ve been through. It doesn’t amount to a hill of beans. It’s just a bunch of people, you know, talking to each other, spinning themselves up over a pile of garbage. And it’s people like The Washington Post talking about a total Democratic freak-out. You want to talk about a freak-out, look at these Republicans all like they want to get rid of all the people in the country, they want to repeal the Constitution, and God knows what. You want to freak out on something, freak out on that….It’s just mostly, you know, stupid media people talking to other stupid media people, making stuff up and spinning themselves up on something that’s not going to amount to a hill of beans. And by the way, I’m looking forward to the Benghazi hearing in October. We should see how many questions they’re going to ask on Benghazi. What they need to do is just calm down and, you know, enjoy the race. There’s going to be some interesting politicking coming up and it’ll be fine. …You know, people are going to interpret every word, every expression that she makes. Everything – you know, the rule of the media is this: “The Clintons don’t deserve a defense.” They get irritated if somebody comes on and defends them. And I just don’t play by those rules, I never have and I’m not going to play by those rules…I’m going to campaign hard for her and I’m going to call out the stupidity in the media when I see it, just like the stupidity that was in The Washington Post, “full Democratic freak-out,” give me a break.”

Bernie, Bernie, Bernie…While not as ridiculous as Carville, Hillary’s supposed rival is equally corrupt. Bernie Sanders won’t talk about Hillary’s machinations, possible law-breaking and lying, he says, because  Clinton is target of  “corporate media,” which focuses on “the game’ of criticizing her instead of covering more important issues.

“Previous statements are inoperative.” Hillary Clinton’s campaign said this week that emails on the private server she used when she was Secretary of State contained material that is now classified. Clinton had previously said that no classified material was on her server.

“She was at worst a passive recipient of unwitting information that subsequently became deemed as classified,” said Brian Fallon, a spokesman for Mrs. Clinton’s campaign.

Or is that a an unwitting recipient of passive information? Since Clinton set up the server and everything she sent or received came from it, how can anyone believe that she had no idea that some–most?—of the information would be regarded as classified? Who is this kind of doubletalk expected to fool?

And THIS wasn’t even true. Today Reuters reports that some of the information was to be presumed classified, and if there is anyone charged with knowing that, it is the Secretary of State:

The new stamps indicate that some of Clinton’s emails from her time as the nation’s most senior diplomat are filled with a type of information the U.S. government and the department’s own regulations automatically deems classified from the get-go — regardless of whether it is already marked that way or not.

In the small fraction of emails made public so far, Reuters has found at least 30 email threads from 2009, representing scores of individual emails, that include what the State Department’s own “Classified” stamps now identify as so-called ‘foreign government information.’ The U.S. government defines this as any information, written or spoken, provided in confidence to U.S. officials by their foreign counterparts.

This sort of information, which the department says Clinton both sent and received in her emails, is the only kind that must be “presumed” classified, in part to protect national security and the integrity of diplomatic interactions, according to U.S. regulations examined by Reuters.

“It’s born classified,” said J. William Leonard, a former director of the U.S. government’s Information Security Oversight Office (ISOO). Leonard was director of ISOO, part of the White House’s National Archives and Records Administration, from 2002 until 2008, and worked for both the Bill Clinton and George W. Bush administrations.

Why do they keep doing this, Mika?

“It is not just Clinton’s private server that may have contained classified information. The State Department filed court papers Wednesday afternoon saying it “does not believe that any personal computing device was issued by the Department” to Clinton. “Anytime you’re bringing your own equipment and using it for work purposes, it’s not as secure as something that’s actually issued by the company,” CNET senior editor Dan Ackerman explained. “Because they take those laptops, for example, and they pre-configure them, they put their own software on them, tracking software, update software, and they distribute them.” That raises the question, how secure were her personal devices, like her BlackBerry, since they weren’t issued by the State Department?

Me! Me! The answer is: “Not nearly secure enough.” Furthermore, Clinton had lawyers, who were not cleared by State, vetting her e-mails to determine which ones would be destroyed, meaning that they reviewed documents they should not have seen. She also allowed her lawyer to handle a little, teeny flash drive with thousands  of her e-mails, some of them now classified, on it, a per se data breach, and an ethical violation by her lawyer (in my view.)

Lies? Lies? Why is that a problem? Two extensive overviews of the scandal were published online, one by Slate, and another on Bookworm. It is worth reading both, but what I find fascinating is that the Slate overview doesn’t deal with all the lying and the generally deceitful and misleading manner in which Clinton and her paid liars have dealt with and continue to  deal with the matter. That’s the most significant aspect of the scandal, as far as what it tells us about the trustworthiness, values and character of a potential President. Slate’s analysis, by Josh Voorhees, doesn’t mention the words “lie” or “false” once, using instead jaunty equivocations. ( ” Q: Whoa. Doesn’t the fact that Clinton had someone “wipe” the server suggest wrongdoing? A. Not necessarily!” ; “Q: That sounds pretty bad. A: It’s not good!”)  The Bookworm overview finds five opportunities to use “false,” and appropriately so.

16 thoughts on “Your “Hillary’s E-mail Scandal Is Anything But Nonsense” Update: Links, Developments And Comments”