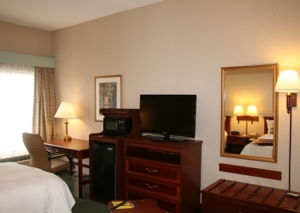 I’m in the midst of a legal ethics tour of Virginia, moving from one hotel to another. Last night I arrived at a Richmond Hilton at 11 pm, after fighting the usual traffic jams from late night construction on Rt.95 in my two hour car trip to get there. Oh, I had all the usual fun: the room that I had been told was pre-paid by my hosts wasn’t; later, the Wi-Fi in the room didn’t work. First, however, I immediately noticed that room 527 featured a TV that was hanging limply from its pedestal, forward and to the left. I guess I could have watched it sort of comfortably if I sat cross-legged on the floor with my head tilted to one side like President Buchanan.

I decided to call the desk instead.

The chirpy clerk answered my call brightly. “Yes, Mr. Marshall, what can I do for you?” she said.

“Well, my TV is broken. The screen is crooked, and it’s tipping off its pedestal.”

“Me too. Wouldn’t your housekeeping staff report something like that?”

(Why are you waiting for me to ask what you’re going to do to fix this?)

“Unfortunately, Fred [Note: the maintenance people at hotels are always men, and always named Fred], is getting off soon. Do you need this addressed now?

[There it is. I have been subtly but clearly informed that if I were considerate and a nice guy, I’d say, “Well, never mind. I’ve got my computer, and I’m going to bed pretty soon.  I don’t want to trouble you.” Well, the hell with that!]

“I would like a functioning TV in my room, yes.”

“I understand,” she says with a chill. “I think the fastest thing would be to move you to another room, if that would be OK. 528 is open.”

“Fred will be right up.”

It’s not germane to the topic, but the TV in 528 was even in worse shape than the one on 527. Fred was able to fix the one in my original room in about 20 minutes, and he was very nice about it.I didn’t tip him, by the way. I posted on this dilemma earlier, I think. I shouldn’t have to pay more to get a hotel room in the shape it was supposed to be when I walked into it.

I am, however, really tired of this response from establishments, not just hotels but restaurants,  retailers and other merchants when you complain about something relatively minor that still shouldn’t be the way it is. I used to fall for it too; I bet most people do. See, the way it is supposed to work is that the hotel clerk says, “I’ll send Fred right up to fix that, sir!”and I say, unprompted, “Oh, that’s not necessary. I guess I’ll be OK.”

Then I get to generous and do my Golden Rule thing without being shamed into it.

The hotel is manipulative and irresponsible to ask me to take less than I bargained for and have every reason to expect, and it is unfair to lay Fred’s inconvenience off on the paying guest. The housekeeping staff should be  confronted about why the fact that the room is unrentable seems to escape their notice, which is the real reason Fred had to go home late.

You do the same.