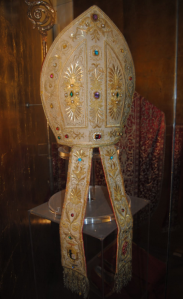 I have been touched by the passionate defenses of the Pope during his visit here, by sincere believers who desperately wanted not to see what was going on. If only Pope Francis respected his supporters enough to live up to the ideals they projected on him, which included insisting, against all evidence, that he was merely talking in broad, moral generalities to Congress rather than lobbying for progressive policies, like making illegal immigration legal.

He was, we were told, only showing us where “true North” was according to the Church. I guess he just forgot to bring up abortion, which the Church regards as murder (and Joe Biden too, when he’s not playing politics) as he was lecturing our legislators about “human rights.”

The second he returned home, the Pope threw gay couples under the Popemobile, stating that Kim Davis’s position as a government official refusing to obey the law was a “right.” Again, his defenders insisted that this was just an abstraction. Now we hear from Davis’s lawyers that she had a secret meeting with Pope Francis. Davis says that he hugged her, gave her a rosary, and told her to “stay strong.”

“That was a great encouragement. Just knowing that the pope is on track with what we’re doing, it kind of validates everything to have someone of that stature,” Davis said.

Naturally, those who can’t handle the truth will say she is lying. There is no evidence that Kim Davis is untruthful, and her lawyer would be facing discipline if they falsely reported what did not occur. This really happened.

Got that, Popophiles? While a guest in this country, while progressives were tripping all over their usually Christian-mocking selves to proclaim him as a moral exemplar for setting U.S. policy, while he was being honored by the President and treated with more deference by the news media than any foreign leader, Pope Francis was surreptitiously encouraging an anti-gay zealot to defy the U.S. Supreme Court and the rule of law, while withholding the human right to be married from gay Americans.

I have already pointed out that the Pope is a hypocrite and a coward. With this conduct, he showed that he is a sneak as well, and blatantly disrespectful of the laws of the nation in which he was an honored guest. This was a breach of manners, protocol and a betrayal of trust on a massive scale.

It will be interesting to see how many of those who twisted themselves into ethics Escher landscapes to spin the Pope’s words and conduct have the integrity to admit that he has proved Ethics Alarms right, and them wrong. My guess is “not many,” but I will be happy to be surprised.

61 thoughts on “The Pope’s Smoking Gun”