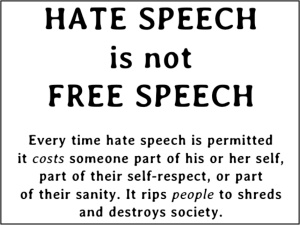 Anyone who believes this doesn’t understand the concept of “free speech.” Fortunately, one of the purposes of a liberal arts education is to teach students what…oh. Right.

There is no way, I have suggested, that the actions and rhetoric from the protesters at the University at Missouri clamoring for “safety” and an end to incidents of upsetting speech have any place to go except campus censorship by force. To the extent that the African- American students’ conduct has wider aspirations that extend beyond the campus to U.S. society, they threaten free speech, communication and thought in our society as well. Of course, it must have these aspirations: college is supposed to prepare one for the real world, not to render you more vulnerable to its challenges.

Since the defining character of progressive rhetoric in 2015 is double-talk and ambiguity (for example, “immigration reform,” which really means “no illegal immigration enforcement,” or “mass incarceration,” which means “blaming criminal activity on laws and law enforcement rather than too many people choosing to break laws”), it has been hard to get an explicit statement out of sympathizers that confirm my conclusion. Their intent has been clear, as in the episodes where journalists have been muscled away from “safe” places. Others have interpreted the students’ complaints and demands to require censorship by threat of sanctions, as shown by the Mizzou police e-mail telling students to report “hateful or hurtful speech or actions” and their perpetrators, laying the foundation for an elite, racially-based group of campus inquisitors who have the power to define the hate and haters and send them to a metaphorical stake. The students’ words, however, have remained oblique.

Fortunately, here comes Mizzou student body VP Brenda Smith-Lezama to clarify. She was talking to MSNBC about the declared “safe spaces”—which means, for those who need another translation, this means “places on campus where the Bill of Rights doesn’t apply”—and spat out this:

“I personally am tired of hearing that First Amendment rights protect students when they are creating a hostile and unsafe learning environment for myself and for other students here. I think that it’s important for us to create that distinction and create a space where we can all learn from one another and start to create a place of healing rather than a place where we are experiencing a lot of hate like we have in the past.”

Fortunately, Brookings Institute (That’s the liberal one, remember) Senior Fellow Jonathan Rauch, and the author of “Kindly Inquisitors: The New Attacks on Free Thought”,  had just offered the rebuttal to Smith-Lezama confused view of education in an op-ed the day before. He wrote in part…

But if students feel the modern university’s job is to create a “place of comfort” rather than an “intellectual space,” that is hardly all their fault. Many parents of my generation make it their business to spare their children any exposure to upset and risk. Then kids and parents alike are wooed by colleges that promise idyllic experiences at very steep prices.

Yale, for example, markets its residential colleges as “little paradises.” No wonder if some students expect college to provide shelter from intellectual and interpersonal storms.

And no wonder the movement for trigger warnings and safe spaces is gaining traction at colleges around the country. Trigger warnings supposedly help students cope with (or avoid) exposure to upsetting ideas and images; their other purpose, I and many other free-speech advocates believe, is to chill the presentation of controversial material. Either way, they seek to make higher education emotionally safer by making it less intellectually dangerous….

The trouble is that intellectually safe places are finishing schools, not universities. They can confer connections, polish and useful skills, but they will not educate, because to educate is to inflict and to endure criticism, which is not comfortable….So it is only fair to warn students and their parents that higher education is not a Disney cruise. Tell them in advance so they can prepare. Not, however, with multiple trigger warnings festooning syllabi. One will suffice:

“Warning:Although this university values and encourages civil expression and respectful personal behavior, you may at any moment, and without further notice, encounter ideas, expressions and images that are mistaken, upsetting, dangerous, prejudiced, insulting or deeply offensive. We call this education.”

I couldn’t have said it better myself, so I didn’t try.

[By the way, Kaboom!*  Yale actually advertises itself as full of “little paradises”?]

* A Kaboom indicates that a story or statement is so outrageously wrong that it caused my head to explode. This explosion occurred yesterdat when I read Ruach’s piece. It’s cleaned up now.