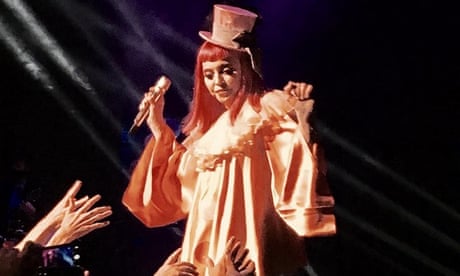 Fortunately for her attacker, Josephine is an idiot. “Seriously, why would I sue Madonna for the best moment of my life?” the teenager told Brisbane’s Courier Mail newspaper. “It was the best night… She was calling me a Victoria’s Secret model the whole time I was on stage, which is so flattering…Only I get to decide if I’m humiliated or not. Why would people assume I am humiliated by my own breast, nipple or body?”

You’re humiliating yourself, Josephine. Be quiet now.  Society can’t allow pop stars to sexually assault women for entertainment value just because some of them like it. There are those who won’t like it—you know, normal people. Laws exist to protect them. What Madonna did would be a flat-out crime in the U.S., and I presume is in Australia too. Madonna should be arrested and prosecuted, even if her victim is a dim-wit. The singer apparently thinks she can openly flaunt basic rules or respect, decency, autonomy, privacy and the laws of the land, because she’s a pop icon, and Down-Under, I guess she is correct. She also sees nothing wrong with sending the broader culture a message that its OK to pull down a young woman’s top without her consent. Australia’s law enforcement system should forcefully show her that it represents a nation of laws, which means even rotting former sex-symbols have to obey them.

And I thought Massachusetts letting Bill Clinton violate polling place laws was bad...though, come to think of it, Mass. Democrats would probably have excused Bill from prosecution if he went up and down the lines pulling down young women’s tops, and you know he wanted to. After all, it’s just sex, right? But I digress…

Madonna knows what she did was illegal: look at what she said. “You can do the same to me.” Madonna know that she had to consent first, or it would be a crime, even if Josephine pulled down her top as retaliation for her own sexual abuse.