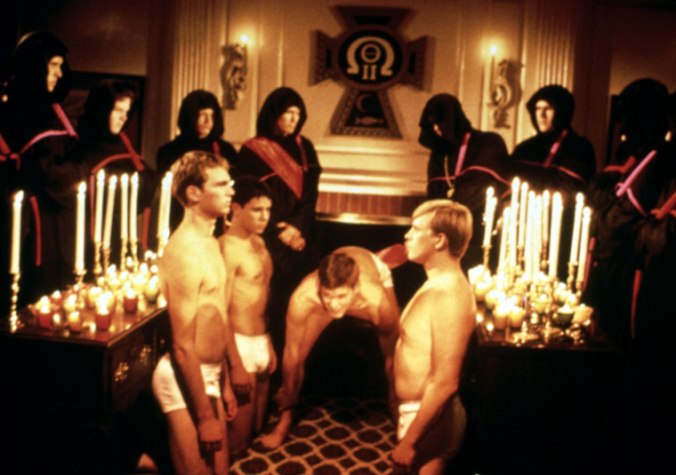 If these idiots do this off-campus, 1) GOOD and 2) it’s none of the college’s business.

In an e-mail to undergraduate students and the Harvard community, University President Drew Faust announced that beginning with next year’s entering class, undergraduate members of unrecognized single-gender social organizations will be banned from holding athletic team captaincies and leadership positions in all recognized student groups. They will also be ineligible for College endorsement for top fellowships like the Rhodes and Marshall scholarships.

The unrecognized single-gender social organizations are what is left of the old fraternities and sororities. When the Greek system was banned many decades ago (and Harvard was an all-male college), the frats reorganized as exclusive college clubs located in houses around Harvard Square in Cambridge. After Harvard merged with all-female neighbor Radcliffe College in the Seventies, sorority-like clubs emulated their male counterparts. In 1984, Harvard issued an ultimatum to the clubs to go co-ed, and the clubs responded by disaffiliating with the University.

“Although the fraternities, sororities, and final clubs are not formally recognized by the College, they play an unmistakable and growing role in student life, in many cases enacting forms of privilege and exclusion at odds with our deepest values. The College cannot ignore these organizations if it is to advance our shared commitment to broadening opportunity and making Harvard a campus for all of its students….Captains of intercollegiate sports teams and leaders of organizations funded, sponsored, or recognized by Harvard College in a very real sense represent the College.They benefit from its resources. They operate under its name. Especially as it seeks to break down structural barriers to an effectively inclusive campus, the College is right to ensure that the areas in which it provides resources and endorsement advance and reinforce its values of non-discrimination.”

Faust was following the recommendation of Dean of the College Rakesh Khurana’s recommendations, who wrote in his report on the results of a “study”,

“[T]he discriminatory membership policies of these organizations have led to the perpetuation of spaces that are rife with power imbalances. The most entrenched of these spaces send an unambiguous message that they are the exclusive preserves of men. In their recruitment practices and through their extensive resources and access to networks of power, these organizations propagate exclusionary values that undermine those of the larger Harvard College community…Ultimately, all of these unrecognized single-gender social organizations are at odds with Harvard College’s educational philosophy and its commitment to a diverse living and learning experience.”

Let us be clear what Harvard is trying to do here. It is seeking to punish students for their associations and activities unrelated to the school itself, and using its power within the limits of the campus to indoctrinate ideological values and require conduct that is unrelated to education. This is a rejection of the principle of freedom of association, one of those enumerated rights protected by the Ninth Amendment of the Bill of Rights, and a cornerstone of American principles. If the college can, in effect, create a blacklist withholding institutional honors from those who choose to belong to an all male or all female club completely distinct from the university, what clearly delineated line prevents the same institution from declaring that membership in the Republican Party, Occupy Wall Street, Americans For Trump or the NAACP are similarly undermining its values?

There is no such line.

As an aside, let me note that when I was an undergraduate, the silver-spoon types who  withdrew into these archaic enclaves were widely  mocked and disparaged for doing so, and I doubt that they are any less so now. I know I was delighted that they chose to hang out together and as far away from me as possible: these were the models for the snotty fraternity members who ostracized Flounder, Otter and Bluto in “Animal House.” (“Thank you sir, may I have another?”) No, I would not have chosen to join such a club (actually, you had to be invited) under any circumstances short of insanity. Nonetheless, a student who chooses to do so and continues to meet his or her obligations on campus should not be penalized in any way. Harvard may not tell a student who to live with, play with, drink with or party with.

I have a hard time fathoming how Faust and Khurana came to think this was any of their business at all, but since they did, they have obviously lost all sense of perspective and respect for autonomy and individual rights. Like so much percolating up from the Obama-tainted  progressive culture, this is nascent totalitarianism, and has to be opposed and stopped in its tracks.

Faust and Khurana should be dismissed. Ironic, isn’t it? We just saw an all-women’s college survive an effort to shut it down, and here is a female president of the U.S.’s most prestigious institution declaring that that such an institution is a blight on the culture. So tell me, Sweet Briar alums: what do you think of the Harvard edict?

Fortunately, the Foundation for Individual Rights in Education (FIRE) is on the case, and is preparing a formal response.

“Outrageously, Harvard has decided that 2016 is the right time to revive the blacklist,” said Robert Shibley, FIRE’s executive director. “This year’s undesirables are members of off-campus clubs that don’t match Harvard’s political preferences. In the 1950s, perhaps Communists would have been excluded. I had hoped that universities were past the point of asking people, ‘Are you now, or have you ever been, a member of a group we don’t like?’ Sadly, they are not.

“Harvard’s decision simply demonstrates that it is willing to sacrifice students’ basic freedom of association to the whims of whoever occupies the administrative suites today. Who’s to say that Harvard’s leaders five years from now won’t decide that Catholics or Republicans should be blacklisted because they might not line up with Harvard’s preferred values?”

I hadn’t seen Silverglate’s quote before I wrote my similar observation above. It isn’t because great minds think alike, but because this is screamingly obvious, except to the ideologically blinded or totalitarian social justice warriors, who don’t care about the slippery slope. They know best, after all.

You can join FIRE in the fight here.

I highly recommend it. The group has an excellent record of prevailing as well as thoroughly embarrassing the institutions it takes on, making Harvard back down, even for the rights of Niedermeyer and Marmelard, will be a major victory against political correctness dictatorship.